Once in a while the Canadiens take a risk and draft an overager in the late rounds. That strategy has paid dividends in the form of players like Mark Streit and Mikhail Grabovski; can Nygren join that lofty group?

It's been an odd journey for Magnus Nygren on our Top 25 Under 25 list. After being drafted as an overager by the Canadiens in 2011, the panel ranked him a lofty 19th due to his solid production in the top tier Swedish league, but last year he fell off the radar completely, going unranked by four panelists and finished 26th. Yet this year he jumps all the way to 15th, so what gives?

More on Nygren: Nygren's 2011 Top 25 Under 25 profile Nygren signs his ELC (with some video highlights)

Well, Nygren is a bit of a late bloomer, making the top Swedish league full time for the first time at 21 years old. When he made it, he was a very one-dimensional offensive defenseman who played extremely limited minutes, much like Marc-Andre Bergeron, but since then things have changed. How much? Well, they've changed so much, that last season Nygren was named the top defenseman in the SHL (formerly Elitserien), winning the Borje Salming Trophy. That means that a Habs pick won the award for the top defenseman in two of the three best professional hockey leagues on the planet (way to let us down on the hat trick, Konstantin Korneyev). 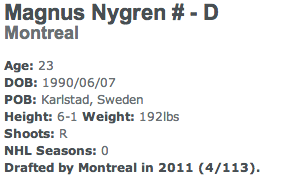 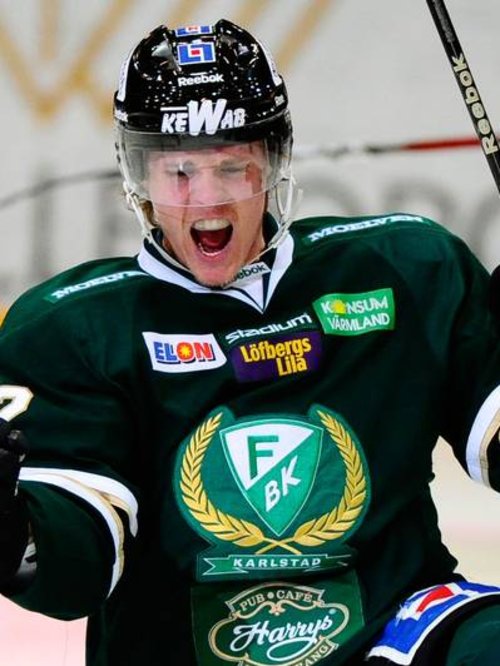 The first thing that you and everyone else will notice about Nygren is his bomb of a shot. Now, scouts have said that Raphael Diaz has a bomb of a shot, or that Yannick Weber has a bomb of a shot, and they have hard shots, but Nygren has a jackhammer. Seeing his shot myself at the Habs' rookie camp in the summer, it was amazing with how much velocity he could maintain accuracy. Several times he beat goalies from beyond the blueline, which is crazy.

Nygren wasn't the best skater in the camp, but he was smooth in his transitions and showed decent agility. Hockey sense also seems to be a strength for Nygren, which fits nicely with his high end offensive skillset. Nygren hasn't really wracked up the assists in Sweden, but he's a competent playmaker, though adjusting to North American ice could put a bit of stress on that part of his game.

At 6'1" and 192 pounds, Nygren isn't a huge defenseman by NHL standards, though he didn't shy away from physical play in the SHL, often times making big hits. Then again, the size of players in that league is significantly smaller than in the NHL, so his physicality may be a question mark.

A couple of years ago Nygren was considered an absolutely brutal defender. He's improved there by leaps and bounds, but it's unlikely that he's positive force in the defensive zone right now, and he may never be. It can't be said that Nygren doesn't consistently give it his all, but for whatever reason, his hockey sense hasn't seemed to translate into stalwart defensive play.

Because Nygren has such a bipolar skillset, it's very tough to predict his future in the organization. Luckily though, we'll get to see how things will play out right away. Though Nygren will have to adjust to the North American ice surface, his age and experience should give him the inside track to earn a roster spot with Alexei Emelin out until early December. With that said, the odds are that he'll start the season in Hamilton, at least for a few games.

Where it gets muddy in predicting Nygren's future, though, is his ceiling. Some seem to think that his hockey sense and skill level are top-four worthy, while others believe that he's likely to become nothing but a powerplay specialist. At 23 years old, the Karlstad native doesn't have a ton of time to prove his worth, and in all likelihood if he doesn't crack the Habs by the end of his two year entry level contract, he'll head back to Sweden.

As with all prospects on this list, we're asking you readers if you would rank the player differently than the consensus. Is there anyone ranked below Nygren that you would trade him for?