Coming off his first season as a pro, Morgan Ellis has dropped a few spots in our rankings, mostly due to an increase in talent from the 2013 draft.

Drafted in 2010, (4th round 117th overall), Morgan Ellis has followed a reasonably steady development path, and has recently completed his first pro season in Hamilton. Playing with a very young squad, Ellis cemented himself in a top 6 role, as several Bulldogs received call-ups to Montreal. Unfortunately for Morgan, he was not among the call-ups, as he found himself behind Jarred Tinordi, Nathan Beaulieu, Greg Pateryn and Frederic St-Denis on the depth chart.

His minutes with the Hamilton Bulldogs should increase this year, as Tinordi or Beaulieu are likely to start the year in Montreal, due to the injury to Alexei Emelin.

I actually voted Morgan as one of our weaker prospects, and I will explain why below. 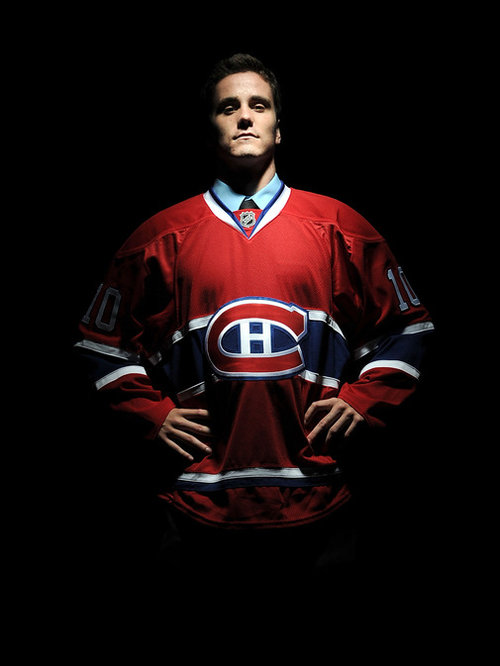 Ellis' defensive game is his biggest strength, as he has proven he can play an adequate defensive game in the AHL. He possesses a good first pass and can produce a decent point shot. His shot blocking ability is reasonable. He has decent size at 6"2, which means his frame can handle enough muscle for him to become a physical presence.

Morgan struggled offensively this year, and showed a lack of mobility and skating prowess. He needs to improve his skating if he ever hopes to crack the Habs lineup. His defensive positioning could also use improvement, which should come with his second year in the pros. His physical game is also somewhat below par, and he could stand to gain some muscle mass.

Ellis struggled mightily in the second half of the season with just one point in his final 46 games. Next year will provide him with the perfect scenario to excel and stand out in a mediocre crop of d-men playing in Hamilton.

Unfortunately for Ellis, he will be competing with a plethora of defensive prospects in our system.

As it stands, I would rank Ellis as our 6th best defensive prospect, behind Beaulieu, Tinordi, Thrower, Dietz & Pateryn. He's also at risk of being passed by Magnus Nygren in the Montreal prospect depth chart.

The upcoming season in Hamilton should paint a clearer picture on Ellis' future with Montreal, but his fate as an NHL'er seems to be in doubt considering the abundance of defensive prospects that stand a larger change of making the NHL.

Which leads me to believe he has a slim chance of actually cracking the Habs lineup any time in the near future. His balanced game will make sure he receives a proper chance to develop, but his lack of high end potential definitely lowers his chances of becoming a regular player with the Bleu, Blanc et Rouge.

At best I project him to be a bottom pairing defenseman. However when discussing Ellis' development, many are quick to point out that Josh Gorges followed a similar path, and has worked his way into a top 4 role.

Since I ranked him the lowest of all our panelists, I decided to ask Dan Kramer, who covers the Bulldogs on a nightly basis, for his unbiased opinion on Morgan Ellis:

"He falls into what I consider the "balanced" d-men category, in that he is "fine" at everything but doesn't excel in any one area. He was clearly outclassed by Hamilton's top 4 nightly (Pateryn/Beaulieu/Tinordi/StDenis), getting almost no PP time (except for injuries and call ups) and spot duty on secondary PK waves.

His first pass is solid. Needs to improve skating/mobility and positioning on D. He isn't very physical and shows limited offensive upside, so he's at risk of being passed by the gluttony of other D prospects in system.

Based on the currently lineup, he should get an increased workload on the Hamilton blue line, but if the Bulldogs want to be competitive they should probably add a top 4 veteran d-man to take those minutes."

Is there anyone ranked below Morgan Ellis in our top 25 under 25 that you would trade for him?

Does Jacob de la Rose's potential make him more valuable than Ellis' complete game? I would argue that it does and I would be willing to trade Ellis for de la Rose. Do you agree?