Taken 34th overall in the 2013 Entry Draft, Jacob de la Rose is the kind of prospect Canadiens fans have wanted in the system for years: a big, fast, physical forward who reads the game at a high level. The eighteen year old makes his debut on the Top 25 Under 25 at 17th.

For the second straight draft, Canadiens draft guru Trevor Timmins called the name of a Swedish forward with his first selection in the second round. This seems to reflect an all new interest for the Canadiens in Swedish trained prospects, one that first brought the likes of Andreas Engqvist and Magnus Nygren into the system, before adding Sebastian Collberg and Erik Nystrom last season. Also, it was the second pick of the 2013 NHL Draft involving forwards that are notably larger than their peers, as size up front became a bit of a theme early on in Draft Day 2013 for Montreal.

De la Rose got a typically mixed rating from our panel, as we're never ones to agree on the rankings of the newest additions to the prospect pool (see Zachary Fucale and Christian Thomas). One vote by Ian that had him outside the top 25 was balanced out by my top ten ranking of the young man. All in all, it worked out to the 17th best average rating on our list. Since I had him the highest, I guess I'll have to try and illustrate why I view him as one of the most important young assets in the Canadiens system. 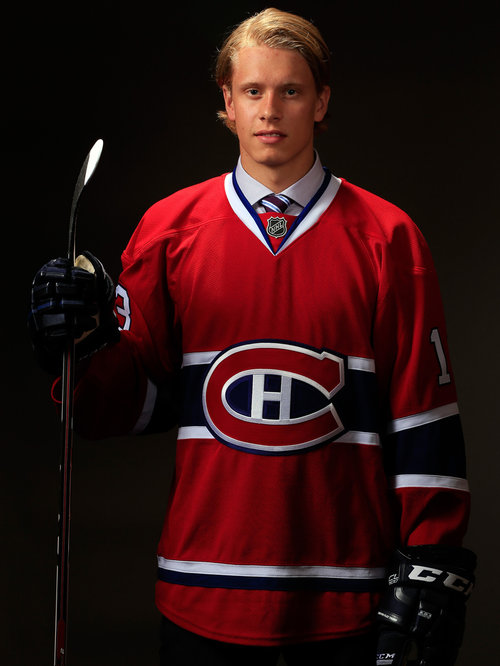 Jacob de la Rose is an impressive skater, and not just in the 'quick for a big man' sense, either. He was one of the better skating forwards available in the 2013 Entry Draft, and in that sense fits the Canadiens archetype up front. Ben Kerr of the Last Word on Sports described his skating as "explosive", "allows him to beat defenders to the outside and cut to the net", and he possesses "good agility and edgework." That speed up front plays into his other more obvious strengths, mainly his forechecking ability and physical play.

De la Rose is a fierce forechecker, and really just an all-round excellent checking forward at such a young age. This is both in reference to his excellent puck pursuit as well as his ability to lay a solid bodycheck in open ice or along the boards. His speed also allows him to backcheck effectively, making him an active forward in all three zones. His defensive ability is universally praised as advanced for his young age. While this includes obvious sacrifices such as blocking shots and making hits, he's also quite adept at his own zone coverage, gap control, and picking up on defensive rotations to help avoid breakdowns at a team level.

"Where's the offence?" is a common refrain from de la Rose's detractors. While few doubt his tenacity, skating, defensive accumen or leadership abilities there are legitimate questions about his offensive upside that placed a damper on his draft ranking. He doesn't possess an elite puck skill, although there are varying amounts of praise for his stickhandling, hands, and offensive vision. His shot and his passing are never noted as strengths, however, and he has yet to show a lot of evidence of offensive creativity. Whether he can score enough at the professional level to push his way to the higher positions of responsibility on a roster is yet to be seen. He may have been the second most utilized skater (behind defenseman Robert Hagg) for Sweden at the Under 18s but he was only able to produce offence at a second line rate.

De la Rose had an out clause in his contract with Leksands that would have allowed him to transfer to the Canadian Hockey League in the event that he was picked in the first round of the Entry Draft (per TSN coverage on Draft Day), but because he was picked 34th and not 30th he didn't have that option. So de la Rose, who largely played third line left wing for Leksands last season in the Allsvenskan, will have to earn more ice time this coming year on a team that is now playing in the Swedish Hockey League (formerly Elitserien), the highest level of professional hockey in the country.

This team promotion muddies the waters a bit for what to expect out of him next season. The team has lost its top two scorers from last year plus young star Filip Forsberg to the NHL next year, but has also gone out and added some veteran professionals, including former Hamilton Bulldogs forwards Ryan Russell and Mikael Johansson. There are some opportunities available to nab more ice time but the team will be under pressure to maintain its standing amongst Sweden's top twelve clubs. Working in de la Rose's favour will be his reputation defensively, which should help earn him a decent amount ice time, whether with scoring forwards or not.

I looked up similar players that have been drafted out of Sweden in the top three rounds since 2005 to try and get a gauge on what to expect from him production wise going forward. I tried to focus on bigger forwards, plus ones that were known for being strong defensively, to narrow the focus a bit. Here are some comparables and how they did in the season after they were drafted:

Players in italics indicate a direct comparable: they all played in the Allsvenskan during their draft eligible season.

As you can see, the results saw two players jump to significant contributors in the Allsvenskan, but none of the forwards that played in the Elitserien were significant players. The good news is that de la Rose was ahead of his peer group for the most part through to his draft season. While I'm not bullish enough on him to say he's trending to the level of a Patrik Berglund, I'd say he tracks quite favourably compared to players like Backlund and Andersson, both of whom are strong defensive centres in the NHL today. Carl Klingberg offers the only direct comparable who made the jump from the Allsvenskan in his draft season to the Elitserien in his +1 season, and unfortunately for us he's a player that has not emerged into the NHL, though he was more pegged as a big offensive forward rather than one with strong defensive prowess like de la Rose.

What we generally see from his comparables is that de la Rose was more professionally capable at a younger age than most of them, but when he has competed against his age group, he hasn't been quite as dominant. It seems to be the opposite problem that Sebastian Collberg is facing in his development.

Another thing to note is that there are plenty of players, good ones at that, that have similar scouting reports to de la Rose that have made it to the NHL in prime roles. As a Canadiens pick, he is more reminiscent of guys such as Louis Leblanc and, going back a while, Chris Higgins as draft picks. If you can't pick top scorers with your draft pick, then picking up top defensive forwards that are excellent skaters seems like a smart strategy from your early picks. He seems like a very smart bet to make it to the NHL, and if he does, I think he stands a pretty good chance at being a very good NHLer.

Our panel was vastly divided on the player, so we'll let you sort out which of us were crazy and which of us were reasonable. Would you rather have de la Rose or Christian Thomas? What about Darren Dietz? Or how about some other players that haven't made an appearance on the list yet?