How has Dietz progressed since we last looked in on his development?

For the second time in this year's Top 25 Under 25, we've reached a Saskatoon Blades defenseman hoping to find himself on the Canadiens blue line in the coming years. Dietz, acquired 138th overall in the 2011 NHL Entry Draft, was the third of four consecutive strong picks in the fifth round for the Canadiens, following Gabriel Dumont and Brendan Gallagher, and preceding Charles Hudon.

As Memorial Cup hosts in 2013, the Blades had high expectations as they loaded up their team with high-quality talent in an effort to bring home Canadian Major Junior Hockey's biggest prize. The Blades were never really able to gain consistency, however, stumbling out of the gate, embarking on a huge hot streak to rocket back up the standings, and then managing only a single victory in four games at the Memorial Cup.

Dietz's WHL career is now over, and he will move on to the Hamilton Bulldogs where he will seek to earn minutes as part of a still-young corps. Incidentally, Dietz will also be reunited with his former Lethbridge midget teammate, this year's number 25 prospect Patrick Holland. 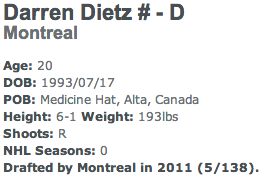 After coming in at 21 in last year's countdown, Dietz's moves into the teens in 2013. Contrary to the effect observed with some of the Canadiens' other prospects who were not drafted in 2012 or 2013, Dietz does not seem to have been affected by the Canadiens influx of young talent in the past two years. In fact, the consensus amongst the panel seems to be that Dietz belongs toward the middle of the group, which is where he's ended up. 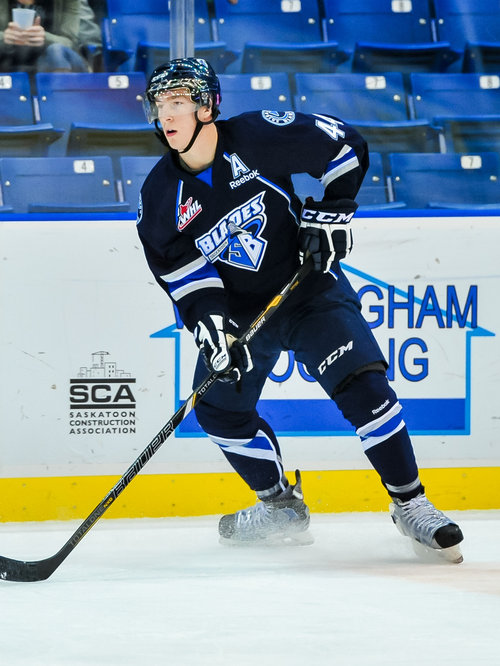 Despite his team's struggles, Dietz was excellent in 2012-13. Dietz led the WHL in goals by a defenseman with 24, and his 58 points combined with his all-around presence were enough to land him a spot on the WHL Eastern Conference First All-Star team. The mid-sized blueliner was a workhorse in Saskatoon, logging huge minutes, playing well at both ends of the ice, and setting the pace in a defensive group that includes two legitimate NHL prospects in Dalton Thrower and Colorado first-rounder Duncan Siemens. Basically, Dietz's play was exactly what you're looking for from a 19-year-old CHL defenseman who has NHL aspirations.

Dietz has been heralded previously for his intelligence and vision, which allow him to make some nice first passes to start the rush. While Dietz has maintained his smarts and playmaking ability, he has started to develop some new tricks on offense as well. A number of sources have noted that Dietz has some slick hands - please see exhibits A and B, beginning at 1:22:

Dietz has also demonstrated some growth in previous problem areas, showing that he can still play a tough game while taking fewer penalties. Dietz dropped the gloves less often this season, posting only two fights this year, including one that was little more than a one-punch scuffle.

While Dietz has matured in his all-around game, he still does not possess elite skating abilities, or the type of bomb from the point that a guy like Dalton Thrower can offer. Dietz also has room to grow in his physical game, as he will be tasked with maintaining his gritty style against stronger, tougher AHL players.

Like any 20-year-old defenseman with some aggressive offensive tendencies, Dietz will have to continue to work on picking his spots when it comes to pinching in the offensive zone, and stepping up on defense.

Finally, while totally out of his control, Dietz has the inherent weakness of playing right-handed amidst the Canadiens substantial backlog of right-handed D talent.

Dietz will need time to continue to improve at the professional level, and given the strength of the Canadiens' system, he should get it in spades. Dietz should have the chance to integrate himself into the Bulldogs roster with an opportunity to play solid minutes, but without the responsibility of carrying the team offensively or defensively. With at least one of Nathan Beaulieu and Jarred Tinordi likely to be present, along with Morgan Ellis, Dietz will have a solid buffer to shield him from the the type of baptism-by-fire he might otherwise be subjected to.

Continuing along his current trajectory, Dietz has a shot at being a mid-range NHL defenseman with skills at both ends of the ice in the next few years.

So, would you deal Darren Dietz straight-up for Christian Thomas? What about his former Blade teammate, Dalton Thrower? Let us know in the comments.