The product of the deal that sent former Canadiens prospect Danny Kristo to the New York Rangers, newcomer Christian Thomas is now looking to make a name for himself in the Canadiens organization. In the first year of evaluating the former OHL goal scoring ace as part of the Top 25 under 25, we will examine his origins and his potential.

Christian Thomas comes in at 19th overall in his debut in the Top 25 under 25 rankings, a ranking that I believe has some mitigating factors that we can delve into later.

It is likely to upset some Canadiens fans just by his player card. 5'9" is becoming a very common theme in the listing of player height in the organization, which has become a very thorny issue in the ongoing size debate around the team. Granted, another ongoing issue for team for the last fifteen plus years has been an ability to put the puck in the net, which is a talent that Thomas has displayed so far in his hockey career.

More on Thomas: A profile on Christian Thomas

Thomas joins the Canadiens organization as a 21-year old with a somewhat unremarkable rookie season in the AHL, finishing 21st in rookie scoring, albeit he did tie for 7th amongst rookies in goals. Thomas was also the leading scorer on the New York Rangers AHL affiliate, the Connecticut Whale among their drafted prospects on the roster. Also of interest was his goal-scoring prowess in the OHL, where he established a remarkable consistency for finding the back of the net. 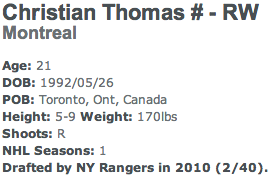 As you can see, Thomas was a divisive prospect among the voters. Matt, Justin and Chris did not rank him within the Top 25 while Ian, Bruce, Laura, and I valued him in the Top-15 of the voting process. I am personally chalking this up to a lack of exposure to Thomas given how little any of us have seen or heard of him until this summer, but also in consideration is Thomas does not read to being as versatile as other prospects in the organization. I ranked Thomas 2nd-highest as I believe that pure scoring is something an organization simply can not have enough of. 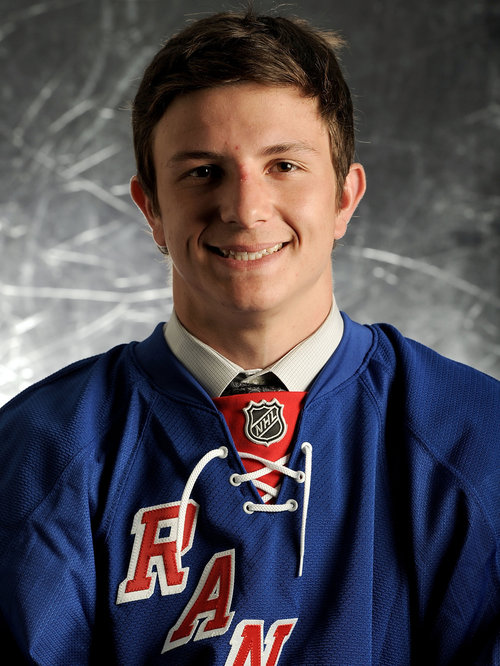 Much like Calder Finalist Brendan Gallagher, Thomas showed a great talent for finding the back of the net in junior hockey. Over 244 career games in the OHL, he scored 137 goals and 257 total points which are very similar numbers to one of the latest fan favourites at the Bell Centre. Also like Brendan Gallagher, he does not seem to be intimidated around the net and will drive for the hard areas to get his goals. He is also credited with excellent offensive vision, allowing him to be a consistent threat by reading the play and finding the right areas to contribute from.

Thomas is also noted to be a very good skater with strong acceleration, which I consider an absolute requirement for any smaller player in the NHL. With the need to work around bigger players, smaller players need to generally possess the extra gear that allows them to gain a step on their opposition and slip past their coverage before they can be boxed out. Lacking this gear, they often struggle.

While Thomas looks to have a natural scoring ability like Brendan Gallagher, he lacks the defensive acumen that Gallagher developed in his junior days. Gallagher broke the Vancouver Giants roster in his time initially as a penalty killer, while Thomas who is a member of the same draft class has yet to show an ability to give defensive value to his team, which limits his potential role in the NHL. If he can not improve this aspect of his game, it will be much more difficult for him to earn a roster spot.

His size of course must also be considered to a degree. While many small players have made a solid career for themselves in the NHL, some fall short despite having good skill. Thomas, much like Gallagher or Gionta will need to display a conditioning level showing he can handle NHL contact and be effective in the goalmouth areas. He has not been injured much in his career however, so this is probably a minor concern for now.

With a natural goal scoring instinct but a lack of defensive value at the present time, Thomas could find himself in the difficult region of 'Scoring line or bust' that talented scoring prospects find themselves in. Thomas will simply need to be better than his Hamilton compatriots to be considered the first option for the Canadiens to call on when scoring talent is needed to fill in a gap in their ranks due to injury or trade.

If Thomas can develop his defensive value it will help his case to make the team, but the most realistic objective is to present his value to the Canadiens as a scoring forward. While the team's roster is essentially decided for the season, a set of injuries to their scorers could see the team scrambling for help as there are few players in Hamilton right now with natural scoring abilities. If Thomas can regularly fill the back of the net for the Hamilton Bulldogs, it will significantly advance his case to fill in as an injury replacement.

Looking at the players behind Thomas, there is not anyone who has any special ability, or mix of abilities that override his goal scoring talent in my view. It is a mix of the unproven and those who just have no likely projection to as useful a role as high as a scoring forward for an NHL team.