The 5th round pick from 2009, Gabriel has flitted about the bottom quarter of the EOTP top 25 under 25 since he was drafted 4 years ago, through one junior and three American League campaigns. The 22 year old forward got about as close as he could get to the NHL this season by providing yeoman service as the organization's top injury replacement call up. This his 4th appearance on this list as he's held a top 25 spot (barely) ever since drafted.

Gabriel Dumont is the epitome of a replacement level forward. He's a guy with generally decent two-way skills who is a solid player at the AHL level and looks like he can competently fill a roster spot in the NHL. But he has no particular stand out skills on offense, defense, special teams, or physical play.

So what stands out about him enough to put him at number 20 on our list?

He's good enough to play in the NHL.

That's a pretty big distinction for a prospect. The fact is that most prospects fail and are shipped out without having any kind of NHL career. And the degree of uncertainty increases the further away they are from the big leagues. That Dumont is a very good bet to not be a complete bust elevates him by a fair degree. Even if he looks to be exactly the kind of player you can get on free agency for a million bucks each summer.

Dumont has played 117 5-on-5 minutes in the NHL so far (about 1/4th the amount Mike Blunden has graced the Habs with his presence during that time). The bulk of which was his stint on Montreal's 4th line in 2013. By any reasonable measure for a depth call up, this was a success, with his line going +2/-1 on goals and +82/-44 on unblocked shot attempts. Doubling up your opponents is great work, but it also reflected the downside of having Dumont in the lineup. The 4th line was shifted from a pure defense role to shelter Dumont and may have been less valuable to the team despite technically better results.

Dumont has been around long enough to be in every EOTP top 25 published (Going back 3 previous summers). In 2012 we ranked Dumont 25th, and Justin Dahan noted that he had a decent chance of playing in the NHL as an injury call up. In 2011 he was 21st, with Kevin van Steendelaar noting that he was considered a pesky, defensive/PKing specialist coming out of junior despite his 50+ goal campaign (the offensive explosion being possibly attributable to one, Sean Couturier, playing on his line). Finally, in 2010, Bruce Peters had him ranked 18th, just ahead of David Desharnais.

Everyone but Chris believes Dumont belongs in the top 25, but only two voters placed him above 18. There is a broad consensus that he's is a significant enough prospect to be on everyone's radar, but whose limited perceived upside means his value is considered relatively low. Here's how his rankings broke down: 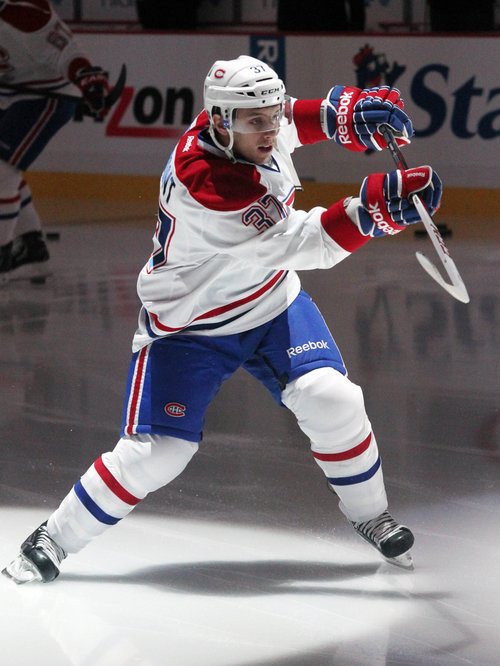 Intense. Gritty. Pesky. Whatever adjective used, its clear the impression most observers first one to give on Dumont is that he is annoying pain to play against. Dumont is a devotee of the long standing and ignoble tradition of getting the opposition off their game by getting right in their face.

Gabriel Dumont's skating, hockey sense and intensity serve him well on the defensive side of things. He is a strong PKer in the AHL and projects to be good enough to crack a PK forward unit in the NHL.

Dumont has been a respectable scorer in lesser league, reflecting how, for a grinder/defensive forward, Dumont sports enough offensive flair that he won't scuttle his trio's counter attack like a Tom Pyatt or Travis Moen.

Most coaches like their depth grinders big and Dumont is very much undersized, sporting a Gionta-esque physique.

Dumont has never flashed the kind of offensive skill that would lead to him being considered for an NHL scoring role. He also lacks a particularly interesting physical dimension, and while a good defensive player, he doesn't appear to be so terrific at it to justify a roster spot on that skill alone. As a depth player he is hurt by not being good enough in one area to really consider him a specialist beyond being a pest.

Dumont could very well be the next Max Talbot and carve himself out a decent career as a regular bottom six forward. He could also very well never get his shot on an NHL roster, or get an chance and fail at it. This could easily see him out of North American hockey a few years down the line, a fate which befalls many a player almost but not quite good or lucky enough to maintain a place in the NHL.

Its easy to cheer for a guy like Dumont, but he practically screams replaceable talent. I could easily see him swapped for a number of players below him due to greater upside. Do the people think they'd rather have Pateryn or Fucale? Make yourself heard below.