Acquired in exchange for Mikhail Grabovski from the Toronto Maple Leafs 12 days after he was drafted in the 5th round, 128th overall, Pateryn finished a four-year NCAA career before making his pro debut in 2013. Is that as good as it gets, or does he have more to show?

Remember when Leafs' fans lauded how they must have had Bob Gainey at knifepoint to grab Mikhail Grabovski for a measly 5th-round pick in Greg Pateryn? Five years on, who's laughing now? The Belarusian is without an NHL contract after being bought out, then ripping his former head coach, Randy Carlyle to the Toronto media, and Greg Pateryn is geared up to begin his second pro season at the age of 23.

As a 22-year-old rookie (he's 23 now), Pateryn was forced into veteran role on the Bulldogs roster, and started the year as the third-oldest defender on the Bulldogs blueline (behind Frederic St-Denis and Brendon Nash). This was a testament not only to the Bulldogs youth movement, but how much the Bulldogs had to rely on some of their young guns.

Pateryn has moved up our rankings this year from 23rd to 21st, and the fact that he has risen is quite impressive considering the difficulties that befell him in his first pro year. A fractured elbow that required surgical repair limited to Pateryn to only 39 AHL games, and his first three NHL games.

For more on Pateryn: Exclusive interview with Pateryn Pateryn's 2012 Top 25 Under 25 profile

Despite having his season hindered by an injury, it was quite a successful one for Pateryn, who tied for first in goals among Bulldogs defenseman with seven (St-Denis and Nathan Beaulieu also had seven). Pateryn's 12 points in the AHL don't look that impressive on the surface, although his pace would have seen him net 21 points over a full AHL season, which would rank him second among Bulldogs defensemen after Beaulieu.

Pateryn's success this season was impressive enough to earn him a call up before Jarred Tinordi and Beaulieu after Alexei Emelin's season ending injury; though that stint only lasted three games before they returned him, and tried up the two aforementioned players.

Pateryn is the second highest ranked player in this year's crop that didn't receive a vote from every panelist. Here's how his rankings broke down: 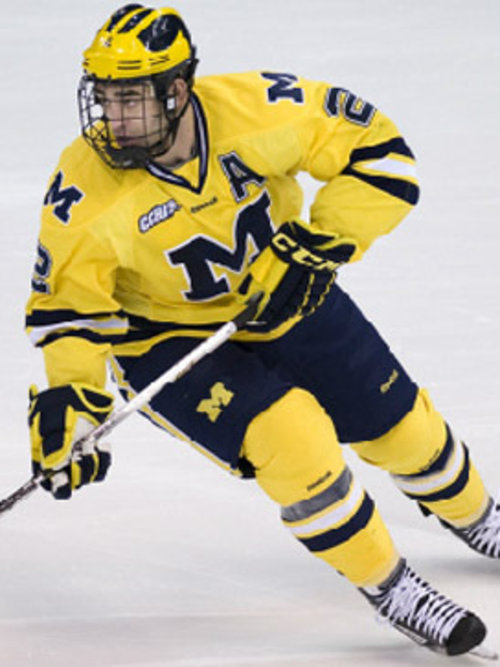 Even though I mentioned his offensive numbers above, Pateryn is not expected to be a big offensive contributor. He's more widely renowned for his defensive ability and positioning. He's strong in the corners and plays the body well. Overall, he's a very smart hockey player. His offensive contribution, as I mentioned, was a surprise. His seven goals in 39 games this season was higher than his career numbers during his four-year tenure at the University of Michigan, where he scored six goals in 142 games. Even during his USL days, he recorded three goals in 60 games. Pateryn's main assets are his positioning and his strong physical play, but at 6'2" and 214 pounds, he's not a hulking behemoth.

Well, his biggest weakness would literally be his elbow, which was fractured in the 2012-13 season. Though Pateryn healed up nicely and had success post-injury, the injury has certainly stunted his development. At 23 years old, Pateryn has yet to play more than 42 games in a season since his USHL days in 2007-08.

Aside from not having fully experienced the rigors of the pro game, Pateryn was the weakest of the three call ups the Canadiens tried out after Emelin went down, putting up just a 48.7% Corsi in three games in which the Canadiens thoroughly dominated their opposition. It may be unfair to compare him to two first round picks, but he is significantly older than both players. Three games is an extremely small sample, but it's possible that Pateryn isn't a great puck possession defenseman at this point. With that said, he was the second best shot producing defenseman on the Bulldogs last season with exactly 2 shots per game, a hair behind Beaulieu.

Pateryn could potentially be a capable 5/6 defenseman, who's solid two-way play could see him land a depth role on most teams. Looking at the Bulldogs' roster, he may be one of the most complete defenders, however Tinordi is ahead of him in the defensive zone, and Beaulieu is miles ahead of him in the offensive zone. It's possible Pateryn's three game stint could be his first and last cup of tea with the big club, but now that he's got that taste; I expect him to put in the work. The real question is, how will he adapt to playing a full 76-82 game season? Hopefully for him, he can stay healthy and we can get a better assessment of his true talent level in 2013-14.

As we've been doing all along, we're asking you readers if you would rank Pateryn differently by telling us whether or not you'd trade him for someone further down the list.