And with their third selection in the 2013 NHL Draft, the Montreal Canadiens gave us a top young goalie to argue about for the next several years. Fucale, the top-ranked goalie in the Draft and first goalie taken, was the highest goaltender the Canadiens have selected since taking Carey Price 5th overall in 2005. He debuts on our Top 25 at a very cautious consensus of 22nd overall.

There have been other goalie prospects for the Canadiens since Carey Price was drafted in 2005, with Trevor Timmins rolling the dice with late round selections in Jason Missiaen (4th round, 2008) and Petteri Simila (Mr. Irrelevant 2009) , but no pick has come close to generating even a notable buzz the way Price's pick did until the team took Zachary Fucale with pick #36 this year. While Fucale doesn't come with the weight of a top-5 selection, he is similarly a Canadian goalie picked by the Canadiens who was the first goalie selected in his draft year. He also comes with great expectations for the Canadian national junior program, and a lot of favourable press as well, regarding his talent and mental toughness.

Oh yeah, and he grew up a Canadiens fan in the suburb of Rosemère, is fluently bilingual and just won a national championship. So yeah, he's just another ho-hum Canadiens prospect like the three guys who preceded him on this list.

We've tempered our expectations on Fucale here at Eyes on the Prize for his first appearance on the Top 25 Under 25. Unlike 23rd ranked Dalton Thrower, who was the Canadiens second 2nd-round pick a year ago, Fucale had a fantastic 2012-13 season while competing for the Memorial Cup. Every challenge set before him he succeeded at, and he and his teammates walked away with a league regular season title, a league playoff championship, and a national championship as well. It obviously was a near perfect situation to play behind, but make no mistake, Fucale was a definite factor in all three titles. His love by the Canadian national organization for his age group is well-warranted.

So why is Fucale not debuting higher than 22nd with that type of pedigree at age 18? Well, my personal ranking played a bit of a role as the only one outside the top 25. So I guess I've got to explain. Let's look at the top goaltenders taken from the Canadian junior system since Carey Price in 2005:

In short, there are no guarantees. Two of these 'top CHL goalie at 18' picks didn't even get a contract from the team that drafted them (Lafleur and Gibson). Jonathan Bernier is only this year going to challenge for a top spot, and he was picked 11th overall (though he netted a pretty good trade return). Chet Pickard will now be playing in Sweden's 3rd level of professional hockey. Matt Hackett is a decent looking AHL prospect but isn't guaranteed even a backup job at this point. Visentin had a fairly mediocre rookie campaign in the AHL, while evil Subban had an excellent OHL year and will try and get going on his pro career this year.

Compare that to 'top CHL C', 'top CHL LW', 'top CHL RW', 'top CHL LD', or 'top CHL RD' at age 18, and you'll get a much higher rate of pro success in the skater positions. Carey Price is the exception rather than the rule, and it took a 5th-overall pick to get him. That doesn't mean Fucale is destined for a future scrap heap by any means, it just means being considered the top guy at age 18 isn't a huge deal by age 21-25. Fucale has a lot to prove in the coming years, and even if he does develop into a legit top 20 goaltender, he likely won't provide a lot of additional value over a position player as an investment. Consider that Tuukka Rask only played 105 NHL regular season and playoff games by age 25 (with only one season as a starter) and you can see how a young forward or defenseman could be viewed as more valuable in terms of taking advantage of a player's 'cheap' years. 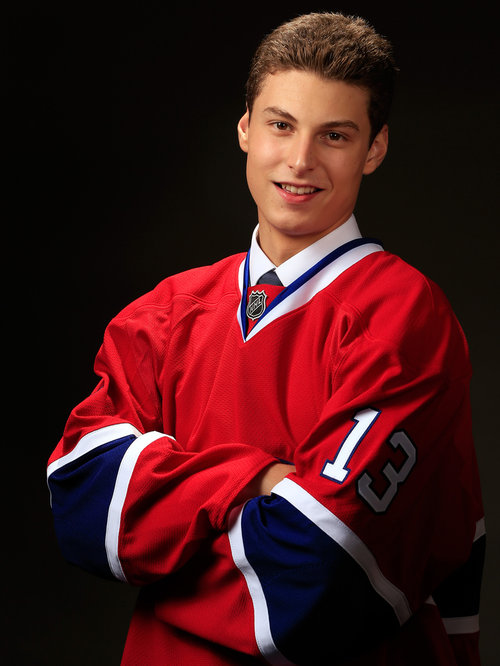 Okay, enough semantics. Let's talk about his talent level. Zach Fucale is most often described as having a calm demeanour in net, who has honed his training based on what The Goalie Guild refers to as his 'economy of movement.' Simply put, Fucale tries to maximize the percentages by playing the angles and squaring up to the shooter. He is less reactionary and tries to keep his movements to a minimum. Corey Pronman of Hockey Prospectus notes his "quick, powerful feet" as one of the main reasons for his talent for squaring up to the shot.

Another strength of Fucale is his demonstrated workhorse ability. He took over the reigns of starting goalie at an almost unprecedented age of 16 and has already played 151 major junior regular season and playoff games plus ten games for a Canadian international team (U17s as Quebec, Ivan Hlinka, Subway Super Series as QMJHL) before being drafted. That's a volume of games forwards and defensemen would be in tough to achieve. No goalie in the QMJHL has played more, or faced more shots, since he entered the league.

For this profile, I contacted Kevin Forbes, a Halifax-based scout/writer for Hockey's Future and Future Considerations. While he confirmed many of the strengths listed above, he also noted that one of the challenges for Fucale this year was maintaining his focus with so little action. His Shots/60 rate dropped from 29.4 in 2011-12 to 25.4 in 2012-13, and the lack of action was noted by Forbes as a contributing factor in allowing weaker goals. If it was an issue, however, it was something he was able to adjust to as the year went on. Viewing his month-by-month splits, Fucale consistently improved his save percentage throughout the year and, as you can see in his stat line above, improved his SV% from the regular season to playoffs both years.

As an 18-year-old, there aren't a lot of warts showing just yet. And he's proving to be a quick learner if he does show them.

I'm not sure how one can do much of a long-term projection on Fucale; he's too young to even consider a NHL arrival date just yet. For this next season, his main goal has to surround making the Canadian World Junior (U20) team. He's off to a great start in order to do that. In the QMJHL, he finished second in SV% with a .911 when combining regular season and playoff totals, behind only Etienne Marcoux who was 19 last year and not eligible for next year's WJC team. That already slots him as the most-likely goalie from the QMJHL to make it, meaning his main challengers will likely be from the WHL and OHL. He will also have to face more shots this year and play an even larger role in Halifax's success with players like Nathan MacKinnon, Jonathan Drouin, Martin Frk, Konrad Abeltshauser, and Stefan Fournier all moving on to professional hockey.

Another achievement for Fucale would be to try and get the CHL's Goaltender of the Year trophy. He won the Defensive Rookie of the Year Award in the QMJHL in 2011-12 and was named to the 2012-13 QMJHL First All-Star Team.

As a bonus, I did a breakdown on Fucale's junior hockey career from a statistical point of view. I decided to track his Quality Starts (QS) as well as try to measure how many extra goals he prevented based on a strict SV% analysis, called "Saves Above Replacement (SvAR)" or "Saves Above Average (SvAA)". SvAR measures the amount of saves above a typical goalie that shouldn't be in the league, while SvAA measures the amount of saves above or below an average starting goaltender. I've also added his shootout numbers just to give you more stats than the typical W-L-OTL/GAA/SV%/SO line.

To put it bluntly, those are some impressive numbers. Quality Starts give you an over 3/4 chance of winning a game, and Fucale did that in 2012-13 72% of the time. His save rate was responsible for +22 of Halifax's goal differential as well (regular season and playoffs combined). Phillip Cadorette was the goaltender for the second ranked QMJHL team, Baie-Comeau, and he was exactly average for a starting goalie in the QMJHL, netting them no extra saves or goals against compared to the average. The two teams finished only 20 goals apart in terms of goal differential for the regular season and playoffs, so one can infer that the main difference in talent between the clubs was in goal. Halifax defeated Baie-Comeau in five games for the President Cup, with Fucale recording a quality start in each game in the Final.

There's a lot to really like about Zach Fucale at age 18. Certainly, there are a lot of people who think he has the talent to make it in professional hockey and view him as a cut above his peer group. There is plenty of statistical evidence to back that up based on his results to date. Still, for me, the uncertainty of projecting a goaltender's future, and the very competitive nature of the position with only a handful of new goaltenders having lengthy careers each generation, makes it relatively easy to take a position player instead of him.

Still, the Canadiens don't have many goaltending prospects. I actually ranked Fucale behind Dustin Tokarski, due to the fact that I think Tokarski has had notable success as a professional and is much closer to becoming a NHL goalie, and therefore has more value. The majority of voters didn't agree with me on that assessment. Would you trade Fucale for any of the players ranked below him?