Acquired in a trade from Tampa Bay just last season, it's easy to forget about Tokarski's winning ways.

Share All sharing options for: Have Fans Forgotten About Dustin Tokarski's Résumé?

Canadian hockey fans are all too familiar with the nation's struggle to recapture gold at the annual World Junior Championships. Come this Boxing Day when the 2014 WJC begins, Canada will enter the tournament having not touched gold since 2009. John Tavares, Jamie Benn, and P.K. Subban were all a part of that 2009 team who have since reached star status at the NHL level.

There was another key piece to that team that was outstanding in the 5-1 win over Sweden in the gold medal game. That player was Dustin Tokarski. 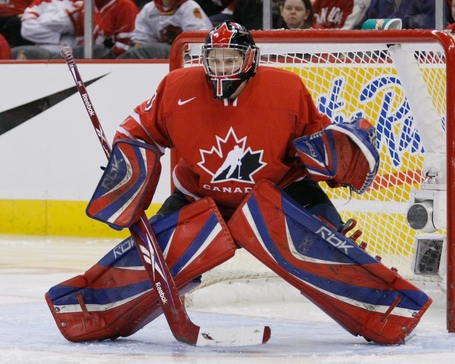 Things were looking nowhere but up for the eventual 5th round pick of the Tampa Bay Lightning. Tokarski was even a part of the 2012 Norfolk Admirals that won the AHL Calder Cup, posting a personal dominant 12-2 record with three shutouts and a 1.46 GAA and .944 SV%.

However, after not being able to solidify himself as a standout goalie within an already weak goaltending crop, Tampa Bay elected to send Tokarski to the Montreal Canadiens organization in exchange for Cedrick Desjardins earlier this year. Tokarski would go on to finish the season with Montreal's AHL affiliate, the Hamilton Bulldogs, posting a modest 6-8 record (with a 2.22 GAA and .927 SV%) on a team that finished dead last in the AHL standings.

There is no doubt that the upcoming season is crucial for Tokarski if he has any plans to eventually earn a roster spot with the Canadiens. After signing a one year, two-way deal with the club in August, Tokarski will be counted on to be Hamilton's starting netminder this season.

Despite Tokarski's accolades, he still has plenty to prove to the Canadiens organization. After all, hockey is a business that comes down to the, "What have you done for me lately?" motto. Nonetheless, the Hamilton Bulldogs will enter the 2013-2014 season with an added year of experience and adversity to look back on, with high expectations.

We already know that Tokarski is capable of being a big-game goaltender, the question is, can he do it for the Hamilton Bulldogs? What are your thoughts?

Tokarski was also a part of this team...