Catching the Torch: Daniel Audette continues to tear up QMJHL

A weekly statistical review of the Canadiens Junior and European prospects.

Share All sharing options for: Catching the Torch: Daniel Audette continues to tear up QMJHL

Player of the Week: Daniel Audette

After snapping an 8 game point streak last week, Daniel Audette is set to begin an even more impressive run based on his latest exploits. He started the week marking two assists, including on the game-winning goal in a 5-3 win for Sherbrooke Phoenix over the Val D'Or Foreurs. His next game would amaze all in attendence as he scored two goals and four assists to lead Sherbrooke in a 6-5 win over the Moncton Wildcats, it was the first four assist game of his QMJHL career and the first six point game of his career..

He finished the week adding two more goals to his totals, in a 6-4 loss to the Gatineau Olympiques. See Audette's two-goal game versus Gatineau. Audette's 12 goals and 14 assists over 15 games have him ranked 6th overall in scoring in the QMJHL, 3rd overall on Sherbrooke. Audette's 12 goals this season also have him more than halfway to his previous career best of 21 goals in 2013-14. 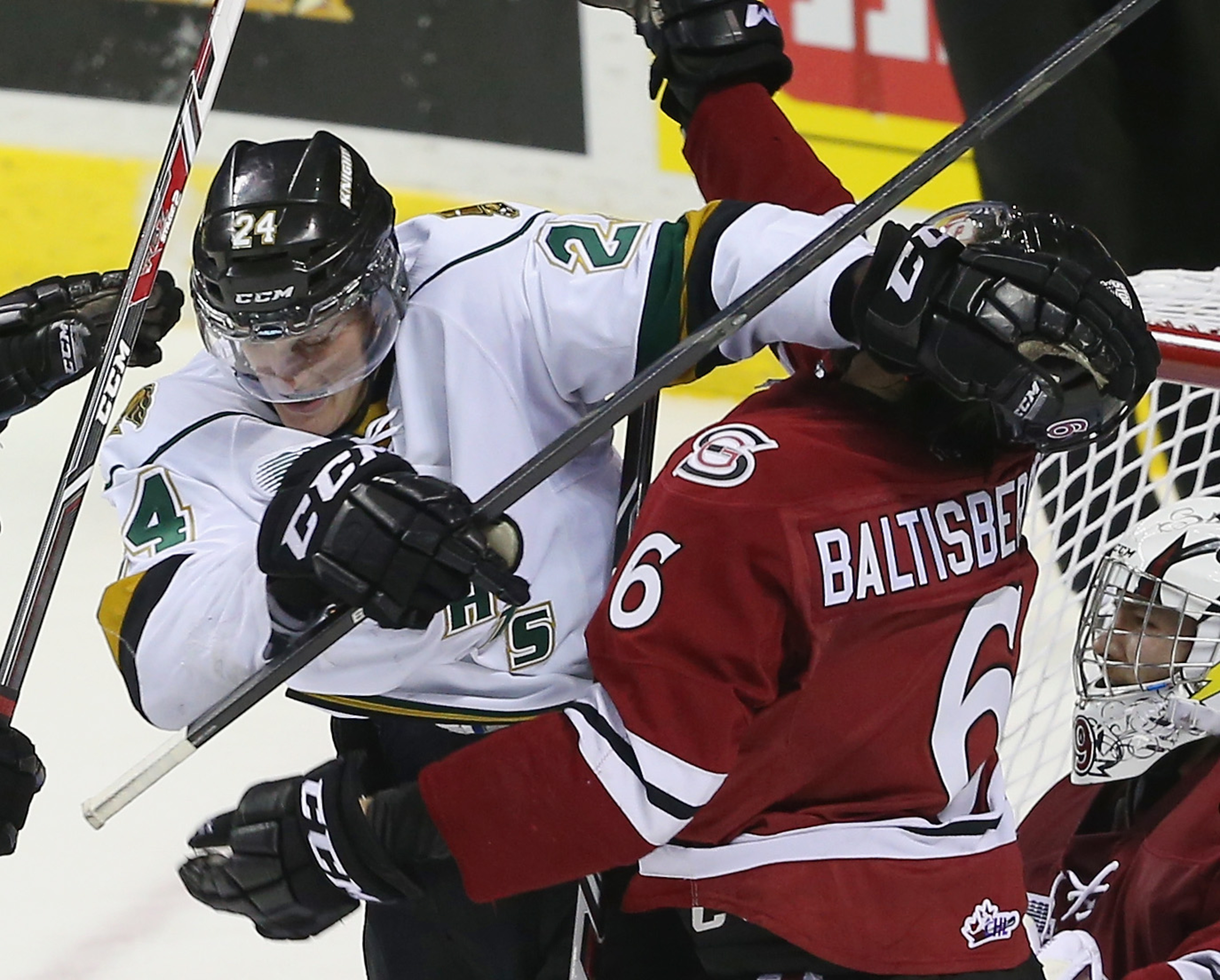 Jeremy Gregoire: Injuries continue to be a tough story for Gregoire, issues with his hand injury have led to requiring surgery and he is now projected to miss up to 7 more weeks of the season. This likely eliminates his chances to be placed on Team Canada for the upcoming 2015 World Junior Championship.

Michael McCarron: McCarron is garnering serious attention in his return to the London Knights lineup, he scored a goal and two assists in a 5-2 win for London over the Ottawa 67s. See McCarron's three-point game versus Ottawa. He marked two assists in the following game, a 5-1 win over the Belleville Bulls. He finished the week off matching his previous career high in scoring marking a goal and three assists in a 7-1 rout of the Guelph Storm. See McCarron's four-point game versus Guelph. With 11 points in 6 games aleady this season, McCarron seems set to quickly glide past his previous season totals of 34 points in 66 games. He has already risen to 4th in team scoring on the Knights.

Tim Bozon: After a delayed debut with the Kootenay Ice due to a recurring lower-body injury, Bozon finally returned to the ice this past week. In his first game with Koorenay he picked up an assist in what became a 9-2 drubbing at the hands of the Calgary Hitmen. He would go without a point in the following game, a 4-3 loss to the Spokane Chiefs.

Brett Lernout: It appears Lernout's cold streak earlier this season is a thing of the past as the Swift Current blueliner continues to pile up the points of late. He started the week collecting a pair of assists in what was a very significant win for Swift Current  as for the first time since 2009 they defeated the Portland Winterhawks with a final score of 5-4. He marked an assist in a 3-1 win over the Regina Pats in his next game, and followed it up with the game-winning goal in a rematch with Regina the following night. Lernout leads all defencemen in scoring on Swift Current with 3 goals and 7 assists over 17 games.

Nikita Scherbak: Scherbak continues to be a steady offensive force for the Everett Silvertips this season. In his first game of the week he scored a goal and assist in a 5-4 loss to the Spokane Chiefs. See Scherbak's goal and assist versus Spokane. He pushed Everett to victory in his next game, scoring both the game-winning and an empty-net insurance marker in a 3-1 win over the Tri-City Americans. He finished the week in style, setting up the overtime game-winning goal in a 2-1 victory over the Seattle Thunderbirds. Scherbak is currently second in team scoring on Everett with 7 goals and 7 assists over 9 games, with the current scoring leader on the team 1 point ahead with 3 games in hand.

Josiah Didier: Didier went without a point in both of his team's games in their weekend series with the University of Minnesota-Duluth, which was split in a 3-1 victory and a 6-1 defeat for Denver. He is pointless through four games this season.

Jake Evans: After a quiet start that that saw him go pointless through his first three games of the season, Jake Evans has begun to manifest a scoring streak with the University of Notre Dame. Evans began a weekend series versus Niagara University generating three assists in a 6-3 win for Notre Dame. Evans marked a goal in his next game, a 7-1 drubbing of Niagara. Through 6 games this season, Evans has scored 2 goals and 3 assists, which is solid production for a freshman in NCAA hockey.

Mark MacMillan: After coming off a career weekend of 7 points in two games, MacMillan's future has now been thrown into doubt. In the middle of a game versus Providence College, MacMillan suffered a laceration on his wrist from a skate and was forced to leave the game immediately. He underwent surgery on his wrist the following day and is now projected to be out indefinitely. With a long recovery expected and no details about the extent of the damage to his wrist, MacMillan's future can be considered unfavourable considering he arguably needed an exceptional senior season to impress the Canadiens organization and earn an entry-level deal.

Zachary Fucale: After seeming to shake off some early-season issues, Fucale struggled in net this past weekend for the Halifax Mooseheads.  In a game where Halifax dominated Gatineau 47-26 in the shot count and scored 9 goals, Fucale gave up 6 goals on 26 shots making the game far closer than one might have expected. He tightened up in his next game, allowing 2 goals on 20 shots in a 2-1 loss to the Blainville-Boisbriand Armada.

Hayden Hawkey: Hawkey continues to struggle in nets this season, as he gave up 3 goals on 36 shots in a 4-2 loss to the Dubuque Fighting Saints in his only start this past week for the Omaha Lancers. He holds a very disturbing .867 save percentage as his season average through 8 starts this year

Artturi Lehkonen: Lehkonen  Marked an assist in his first game of the week with Frolunda HC, a 6-0 win over Djurgardens IF. He went pointless in his next two games, a 4-1 win over Orebro HK and a 4-3 overtime win over MODO Hockey. With 4 goals and 5 assists over 15 games, Lehkonen continues to hold the league lead for scoring among players 20 or under in the SHL and is fourth overall on Frolunda in scoring.

Joonas Nattinen: Nattinen scored his first SHL goal in his 13th game of the season, an eventual 3-2 shootout loss to MODO Hockey. He scored no points in his next  two games, a 3-2 win over Lulea HF and a 4-3 overtime loss to Frolunda HC.

Martin Reway: Reway has returned to the lineup for Sparta Praha after missing four straight games due to an unspecified illness. He recorded no points in his first game back, a 4-3 win over HK Hradec Kralove but did pick up 12 minutes in penalties including a misconduct. He marked an assist in his next game, a 6-3 win over BK Mlada Bolesalv. Reway continues to lead all skaters under 20 in the Extraliga in points with 8 but he is still looking for his first Extraliga goal.