Douglas Murray is a cruel joke, and enough is enough

The evidence against Douglas Murray as an NHL player is too strong to ignore, and if you're still defending him, slap yourself.

Share All sharing options for: Douglas Murray is a cruel joke, and enough is enough

Michel Therrien has been a Jekyll and Hyde coach for the Montreal Canadiens.

He was brilliant in his first regular season, the lockout-shortened 48-game shocker that saw the Canadiens leap from 15th to 2nd in the eastern conference. In his second season, he was a league-wide punchline, continually benching his Norris winning defenseman, and deploying a strategy that saw the Canadiens record the biggest year-over-year possession collapse in league history.

Yet due to the brilliance of star players Carey Price, P.K. Subban, and Max Pacioretty, the Habs had a respectable record, finishing third in the atlantic division with a solid 100 points. Heading into the playoffs there wasn't much confidence that Therrien could outcoach Jon Cooper, but the Therrien of 2012-13 returned just in time, and meticulously picked the Lightning apart in an absurdly dominant four game sweep.

Against Boston, the Canadiens started out rough after a long layoff, but have been better every game, taking the league's best regular season team to the limit and drawing a 2-2 tie after four games played. On the surface, that sounds pretty good. Before the series started, any Habs fan in the world would have been happy with it. But after seeing the games play out, it looks like a wasted opportunity.

Thursday night's game at the Bell Centre between the Habs and Bruins saw the Canadiens put forth a fantastic effort, outside of any time Douglas Murray took the ice.

To Therrien's credit, he did a fantastic job keeping Murray away from the Bruins' best players, but unfortunately, Murray is such a gigantic liability that it didn't matter. Thanks to Olivier Bouchard, we can see this clearly.

Murray spent 78.6% of his time on ice in games three and four against the bottom half of Boston's lineup, and was outchanced 8-1 at even strength, with the only scoring chance for the Habs coming from a play he had absolutely nothing to do with, Mike Weaver's blocked shot that Daniel Briere turned into a Dale Weise breakaway goal. And this is while Therrien has last change, allowing him to choose Murray's matchups.

You might be thinking that although Murray looks terrible here, Francis Bouillon wasn't exactly a world beater in games one and two, and you'd be right, but there were several big differences between games one and two, and games three and four. In the games in Boston, the Canadiens played horrible, and Boston had last change. That means they chose the matchups, which allowed them to expose Bouillon.

Unlike Murray, Bouillon spent 55.1% of his ice time against the Bruins' top lines, and although he was outchanced by the same raw margin as Murray was, the Habs generated six scoring chances while Bouillon was on, and only two while Murray was on. They played about the same amount, Bouillon faced tougher competition, the Bruins played significantly better at home, and Bouillon's numbers are still better.

Never mind that Murray singlehandedly caused the game winning goal by 1) Not knowing where the puck was, 2) Being way out of position, and 3) Losing a battle to a player playing his first ever NHL playoff game, even without that, he hurts the Canadiens every time he takes the ice.

Being bad at defense hurts offense

Max Pacioretty has received a lot of criticism in this series, a lot of it deserved, but game four was clearly his best game of the series and he's improved in every game. He's beginning to wake up, even if he hasn't scored yet. Yet it's no surprise that he's the focal point of criticism by a group of people in the media who have no understanding of the concept of puck luck, or at least would rather ignore it and praise hits instead of watching what happens on the ice.

While Murray is on the ice, the Canadiens are giving up 50.4 shots against per 60 minutes, and putting up just 15.1 shots for per 60 minutes. That is an insurmountable difference.

One reporter even amateurishly called out Pacioretty for not facing the media after the game four defeat, saying he lacked in leadership. What this really means is that reporter wanted a quote from him, and is now crying publically because he didn't feel like being told he hasn't scored yet, something he already knows. Not to mention the obsession the media has with telling him to go to the net, even when the coaching staff instructs him not to do so.

But if you want Pacioretty to start scoring, the best thing you can do is make sure that he isn't stuck in his own zone defending all the time, and lo and behold, we come back to Douglas Murray.

Thanks to Olivier Bouchard once again, we can see how Pacioretty has played over the two games in Montreal. 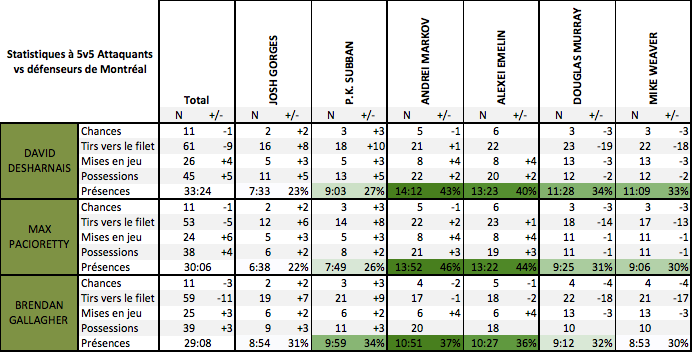 Generating just five scoring chances while Pacioretty is on the ice at even strength is pretty bad, there were tons of games this season where he generated that many on his own in a single game, but looking closer, you can see that while he's on the ice with P.K. Subban and Josh Gorges, 100% of the scoring chances belong to the Canadiens. While on with Andrei Markov and Alexei Emelin, it's essentially dead even, and with Murray on, the top line has generated a whopping ZERO scoring chances.

What Therrien is doing with Murray is essentially cutting off his nose to spite his face, ruining the ability of his top line to generate offense, then blaming them while praising Murray's physicality.

Douglas Murray can do one thing, and that's hit. Unfortunately although he hits like a truck, his hits don't have an impact on the game.

Sure, they electrify the crowd once in awhile and they look good, but look at the actual impact they have. Murray was roundly praised for a shift where he threw three big hits, one on Matt Fraser and two on Carl Soderberg. Each one was a bruiser, but after each hit, who had the puck? Boston kept possession the entire time, and the play ended with a scoring chance for the Bruins, that's not worth praise, it's worth a bus ticket to Hamilton.

The stuff that actually matters

Here's the major problem with Murray; in order for him to have a positive impact on the game, you have to believe that his hits somehow outweigh his disastrous play with and without the puck. You have to believe that the extreme negative impact he has on both the Canadiens' ability to defend, and score, is somehow negated by the physical punishment he extolls, usually on players who aren't very good anyway (Shawn Thornton), and usually when the puck is already gone.

Just to give a visual explanation of how bad Douglas Murray has been in the previous two games, I created a few graphics.

That's jarring in and of itself, but look at how the Habs are playing when Murray isn't on:

That's right, the Canadiens went from dominating possession, blitzing the Bruins in shots on goal, to unimaginably bad without and then with Murray. And this is against perhaps the best team in the NHL, and Murray was played almost exclusively the bottom half of Boston's lineup.

While Murray is on the ice, the Canadiens are giving up 50.4 shots against per 60 minutes, and putting up just 15.1 shots for per 60 minutes. That is an insurmountable difference. 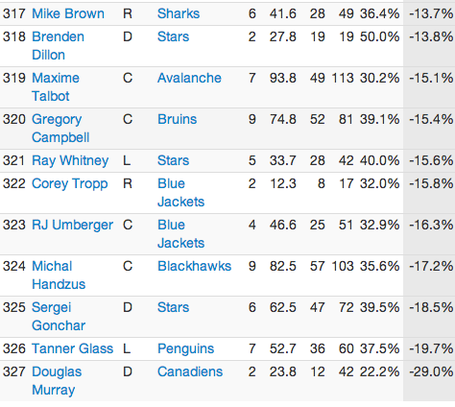 In fact, relative to his team, he's nearly 10 percentage points worse than the next worst player. With the rate at which Murray is being outshot, with average puck luck he will be outscored by three goals every five games.

This means, in the simplest of terms, that if you support Douglas Murray, you think that what he brings to the Montreal Canadiens is worth more than giving up a 4.2 goal advantage in a seven game series. You are literally gifting your opponent more than four goals than they would score over an average player.

There is no legitimate, logical reason for Douglas Murray to ever be in the lineup for the Canadiens again. None.