The most despicable Boston Bruins of all time. Semi-finals: Brad Marchand vs Milan Lucic

Have you ever wondered who the worst Bruin of all time was? We have too, and it's about time we find out, with your help. Today we continue with the semi-finals: Brad Marchand vs Milan Lucic

Share All sharing options for: The most despicable Boston Bruins of all time. Semi-finals: Brad Marchand vs Milan Lucic

It should come as no surprise that both Brad Marchand entries breezed into the final four.

Do we really need to go through his list of antics again? 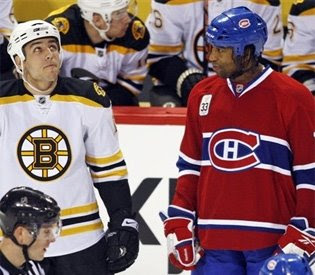 Of course, Milan does have a few redeeming qualities. His work with children, for example. Since he's a natural role model for children worldwide, he fought through his cognitive dissonance and released an anti-bullying book.  The last phrase reads "And if all else fails, use a piece of lumber as a weapon, preferably in your opponents groin."

This should be one of the closest votes in the tournament so far, seeing as both deserve to move on to the final round.

Who do you think should make it to the finals? The nutcracker or the rat? Let us know in the comments below.