The most despicable Boston Bruins of all time. Quarter Finals: Brad Marchand vs David Krejci

Have you ever wondered who the worst Bruin of all time was? We have too, and it's about time we find out, with your help. Today we continue withthe quarter finals : Brad Marchand vs David Krejci

Share All sharing options for: The most despicable Boston Bruins of all time. Quarter Finals: Brad Marchand vs David Krejci

You may be wondering why there's two entries for Brad Marchand in the quarter finals, and I'll answer that inquiry with a question. Who else is more deserving than him to be featured twice in the most despicable Bruins tournament? He is the epitome of loathsome.

Remember when Brad Marchand complained about the Habs diving?

I do. You probably do too.

At this point, everyone does.

Also, I'm pretty sure that he brings candy to orphanages and doesn't share with the orphans. He just sits there eating candy until he's full, and throws out the rest. 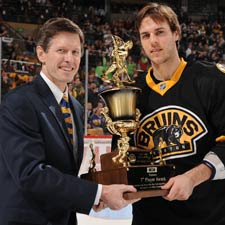 Krejci made it to the quarter finals due to the strength of his dives.

Although it's worth noting that Krejci is rumoured to be the kind of guy that heads to his local McDonald's, and holds up the line while he asks the cashier "What's good here?".  He's also been known to tip his waiter by allowing them to take a picture with his Stanley Cup ring for only $20.