The most despicable Boston Bruins of all time. Quarter Finals: Claude Julien vs Mark Recchi

Have you ever wondered who the worst Bruin of all time was? We have too, and it's about time we find out, with your help. Today we continue to the quarter finals : Claude Julien vs Mark Recchi

Share All sharing options for: The most despicable Boston Bruins of all time. Quarter Finals: Claude Julien vs Mark Recchi 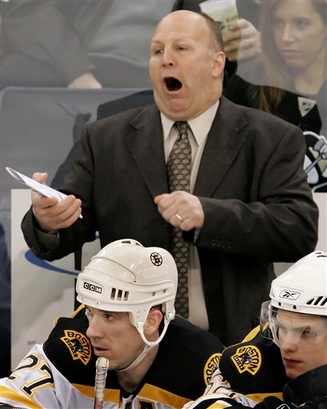 Claude Julien progressed to the quarter finals thanks to an impressive victory against Michael Ryder.

The Blind River native is famous for having been fired by several hockey teams, and eventually finding a home in the bastion of whining, Boston.

You'd expect any level headed human to not complain after taking home a big victory in the playoffs vs a hated rival, but that's not the Claude Julien way. His is the whine.

By now you know all about Claude's hypocritical "we are the victims" shtick, so instead take a look at part 3 of the fantastic series Embellishment City:

Mark Recchi made mince meat of Benoit Pouliot in the opening round, to the surprise of no one.

The reason why? Probably because Recchi actually suggested that one of the most respected doctors in the world, Dr. David Mulder,  purposely exaggerated Pacioretty's diagnosis in the hopes of getting troglodyte Zdeno Chara suspended.

This is the same doctor that healed Recchi while he played for the Habs, and helped his good friend Saku Koivu beat cancer.