Breaking down Jiri Sekac's goal; creativity and tenacity on display

We'll be breaking down as many plays as possible this year, and this time we get to check out some intelligent hockey from Montreal's newly-acquired forward, Jiri Sekac.

Share All sharing options for: Breaking down Jiri Sekac's goal; creativity and tenacity on display

In last night's win versus the Avalanche, Jiri Sekac's creativity, tenacity, and patience were showcased for all to see. In the end, it paid off, as Sekac tied the game for the Habs mid-way through the third period. Let's take a closer look at what happened, and how he scored.

First of all, I'd like to apologize for the quality of the screen caps. I could have used the nhl.com video, however it doesn't show us how the play is started, which is key. 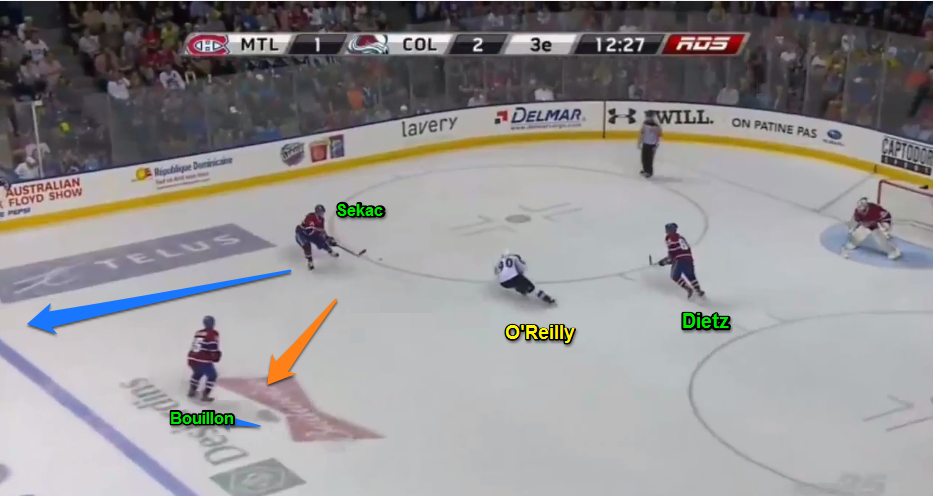 Darren Dietz retrieves the puck in the defensive zone, where he has no choice but to pass it to a back checking Jiri Sekac, given that his defensive partner is out of position. Once he receives the puck, Sekac has two choices. He can either pass the puck to Bouillon to reorganize the breakout, or take matters into his own hands. He chose the latter. 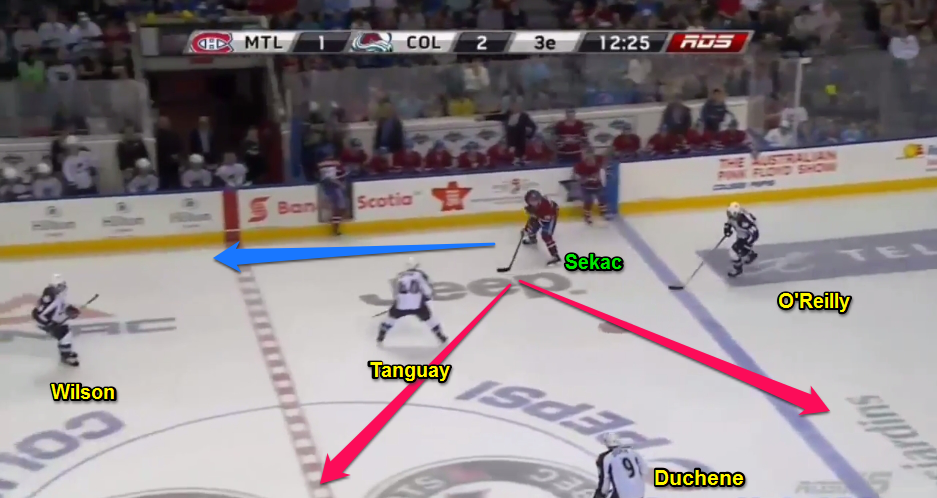 In a vacuum, this frame doesn't make it seem like the best decision. Sekac is basically surrounded, and his two passing options are weak at best. His solution? Patience. 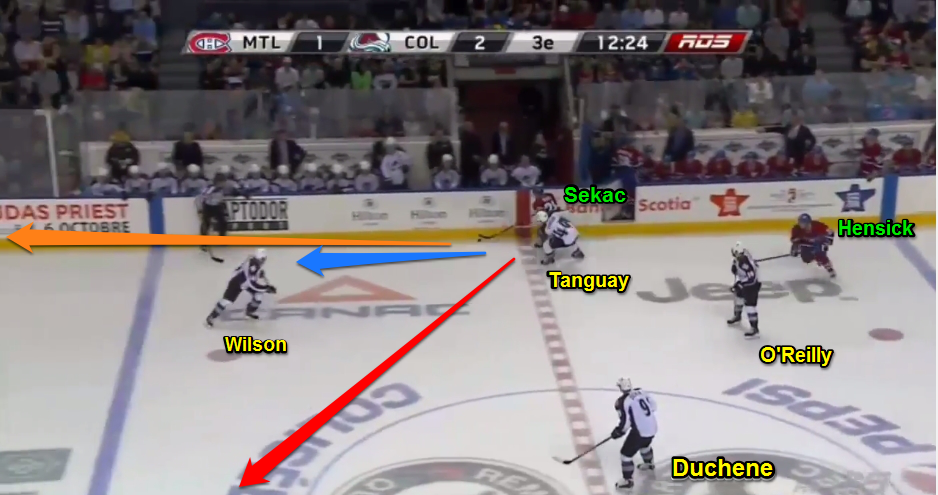 Sekac's patience pays off, as he manages to cross the red line. Here's where the Avalanche start to breakdown. As Alex Tanguay closely checks Sekac, Ryan Wilson decides it's the perfect opportunity to lay down a big bodycheck. At this point, Sekac can either dump the puck in deep, which is what the Avalanche were expecting him to do, attempt a pass to Jacob de la Rose, who was well covered (just out of frame at the bottom), or use his creativity to softly shuffle the puck past Wilson. 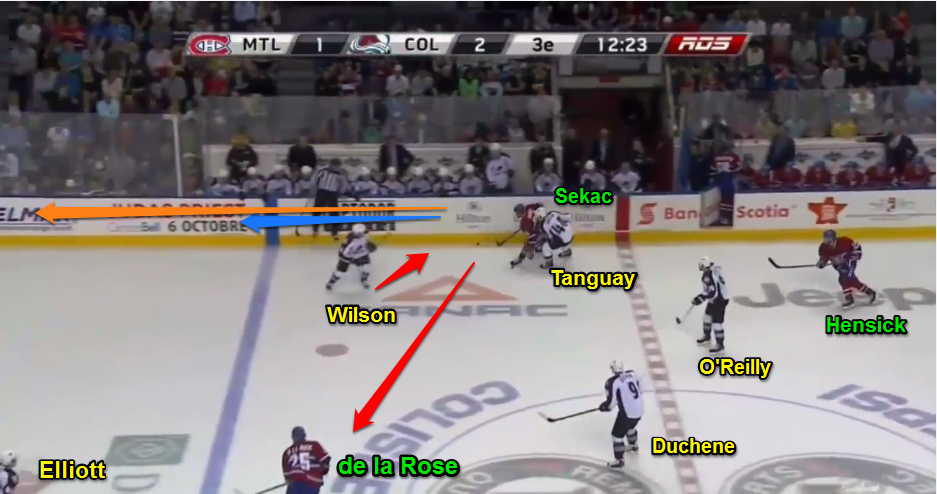 Sekac correctly identifies that Wilson is about to take himself out of position for a hit. Unfortunately, since he was closely checked by Tanguay, there's no way he can hit de la Rose for a pass. Instead, Sekac decides to play the puck softly behind Wilson, and avoid the check, as opposed to dumping the puck in deep. 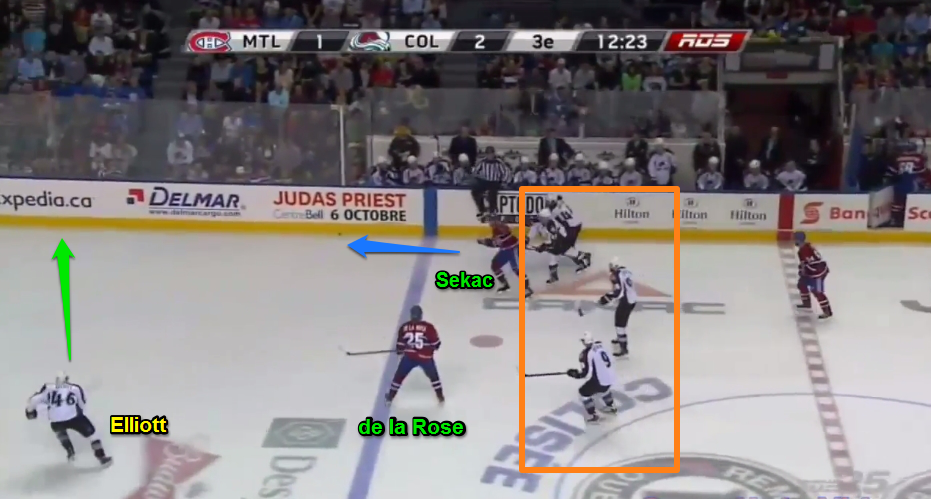 Elliott scrambles to retrieve the puck, since Wilson's attempted hit, and a lack of coverage from his forwards, has led to a possible odd-man rush. 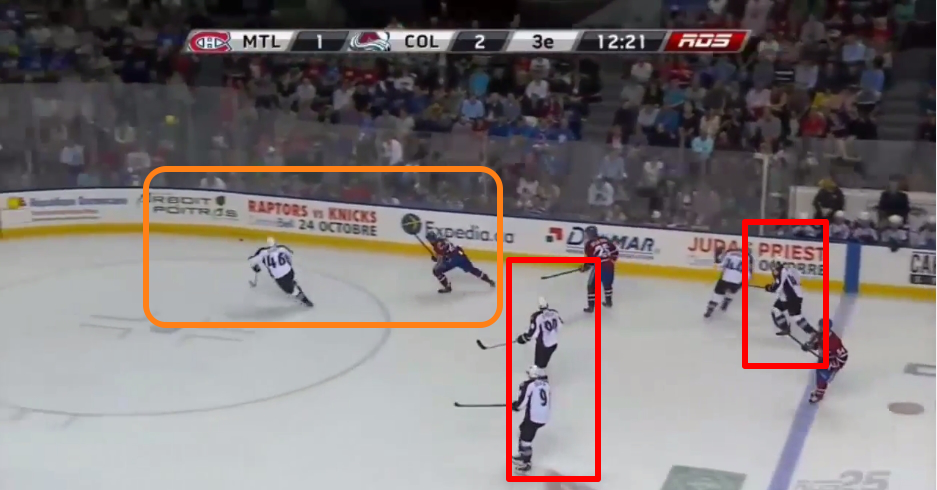 Elliott is first to the puck, but unfortunately for him his forwards are asleep at the switch. Neither Duchene nor O'Reilly cover for Wilson and he has little to no help on the play. 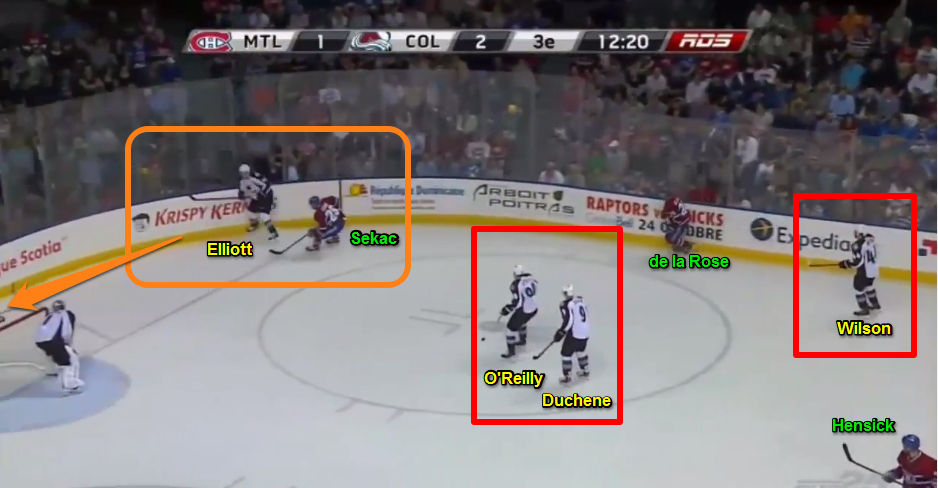 With O'Reilly and Duchene floating instead of helping out, Elliott is forced to attempt a weak clearance, which is easily intercepted by Francis Bouillon. 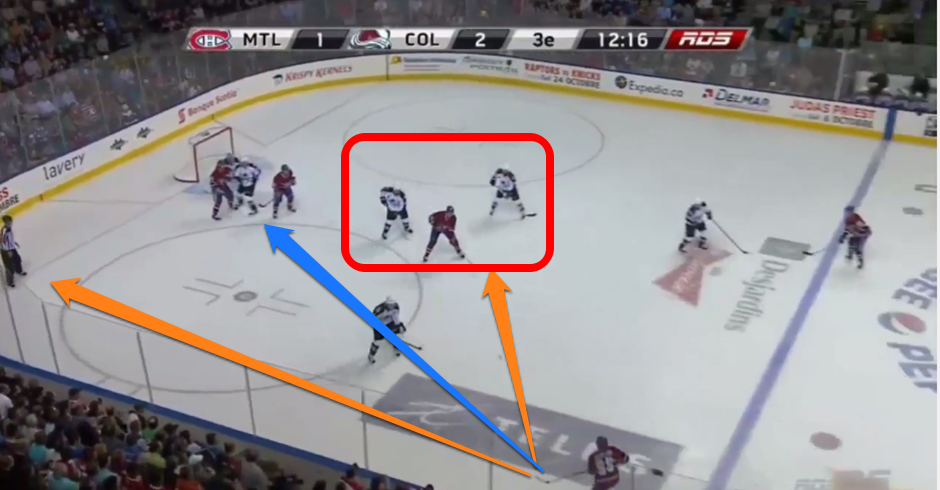 Bouillon has a few options here. Either he can dump the puck behind the net, which isn't a terrible play since the Habs have two players deep, whereas the Avalanche only have one. Another option is to simply put the puck on net, given that Montreal has a heavy net presence. Bouillon chooses to send the puck to Jacob de la Rose, who is being covered by two players. 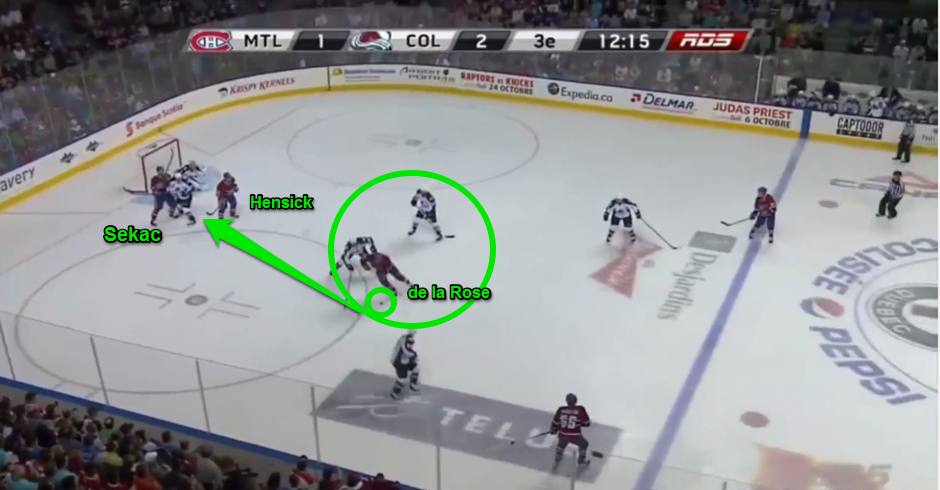 Jacob de la Rose breaks his coverage, and immediately puts the puck towards Varlamov, as he has identified the presence of his line mates near the net. 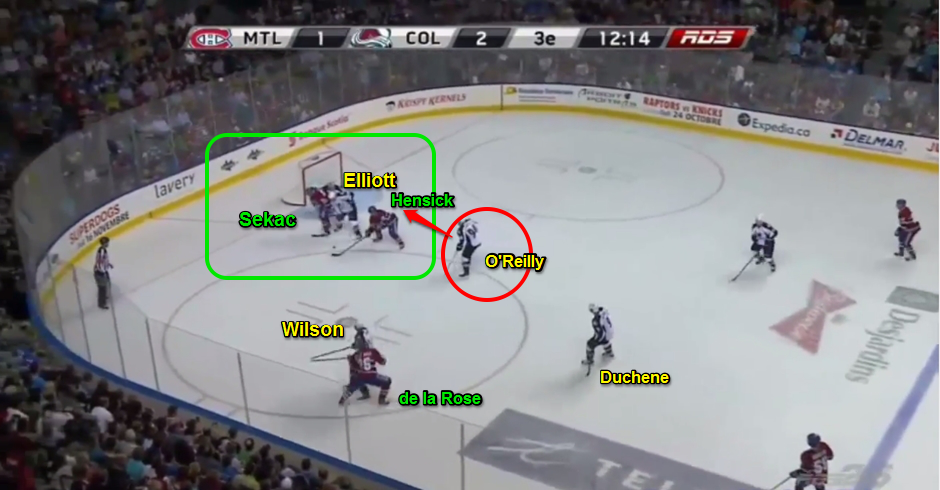 TJ Hensick retrieved the puck as Jiri Sekac kept Stefan Elliott busy. After a shot attempt, the puck ends up rolling to Varlamov's right, where Jiri Sekac wins his physical battle and picks it up. Once again, Ryan O'Reilly is a little lost on the play, although to be fair I'm not sure why Wilson is playing as a winger here. 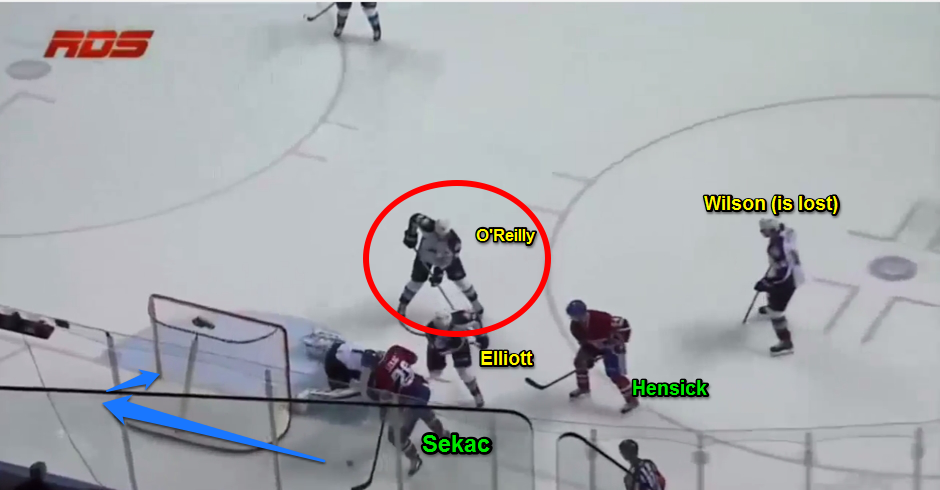 With Wilson and O'Reilly out to lunch, Jiri Sekac sees an opportunity for an easy goal, and makes no mistake.

Sekac's creativity and patience with the puck pays off, helped along with some terrible coverage from the Avalanche. It's also worth noting that Sekac's refusal to perform a classic dump and chase maneuver helped create confusion among the Avalanche ranks, enabling this play to come to fruition.