We're going to try to break down plays a lot more this season on EOTP, starting with Ryan Spooner's goal against the Canadiens on Tuesday night.

Share All sharing options for: Breaking down the mistakes that led to Ryan Spooner's goal against the Canadiens

On Tuesday night, Canadiens 1st round pick in 2014, Nikita Scherbak got a harsh reality check in his first game of professional hockey. During his first shift, this happened:

Lots of stuff went wrong there, and it wasn't all on Nikita, so let's break it down a little bit. 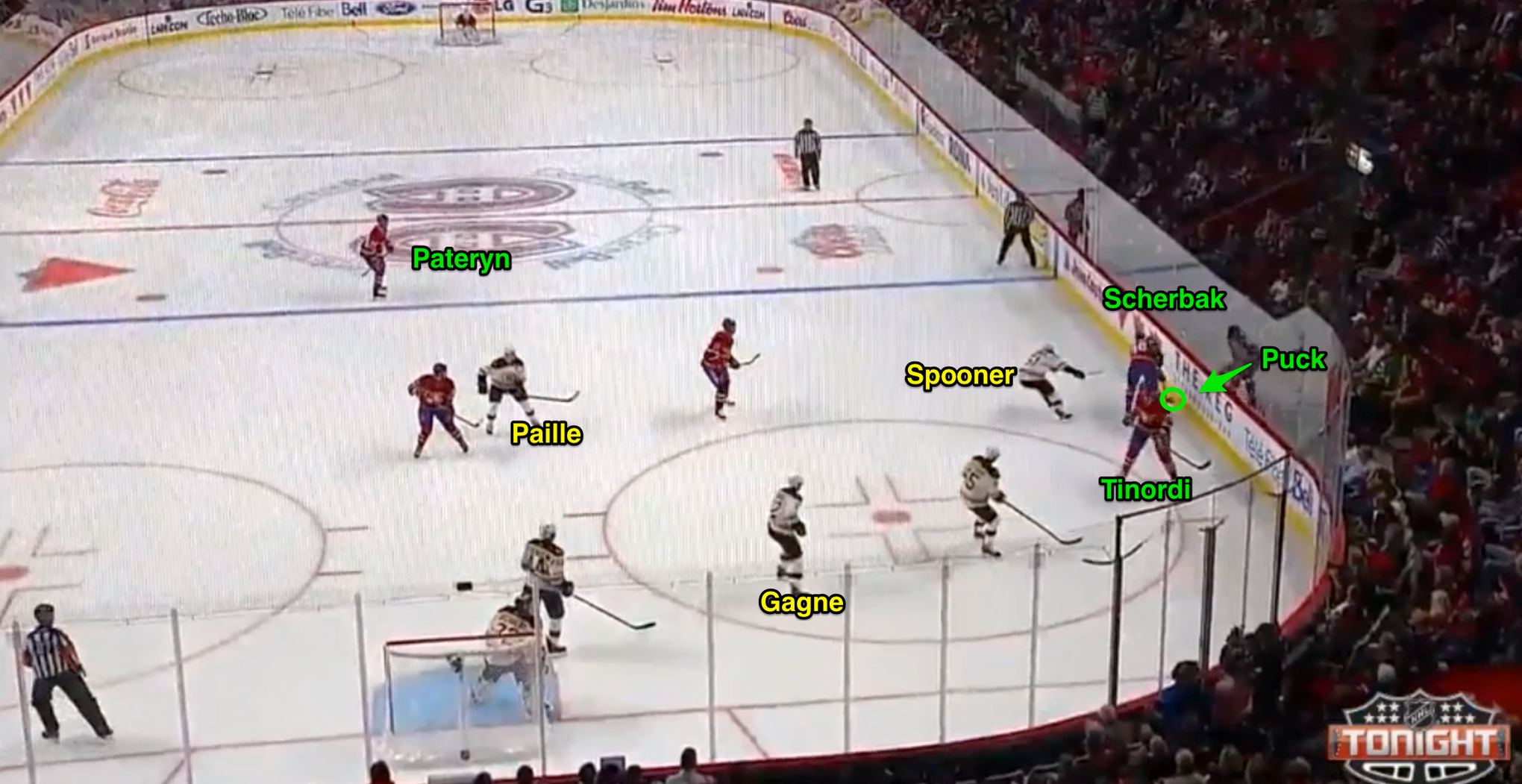 We've focused a bit on Sherbak's turnover to Ryan Spooner on this goal, but the play actually started with a soft pass from the young Russian off the boards. Jarred Tinordi cycled down low and Scherbak tried a bank pass to him. Greg Pateryn is being appropriately cautious, respecting the speed of Paille and hanging back. 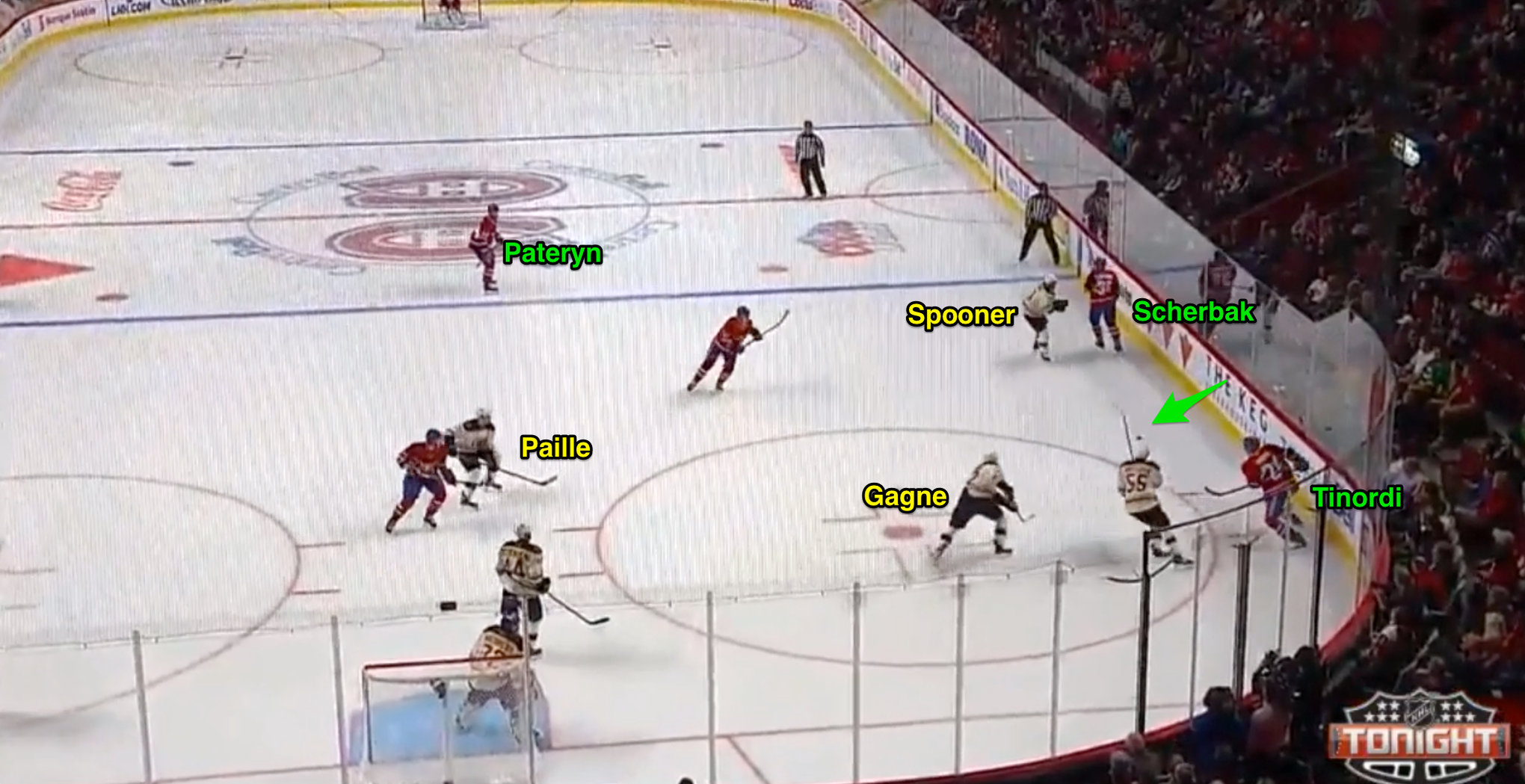 Simon Gagne rushes to the loose puck that didn't bounce the way Scherbak wanted, but Tinordi has recognized this late and is now caught. Fortunately, Dan Paille also hasn't noticed, and it busy marking Dennis Seidenberg's check instead of flying the zone. 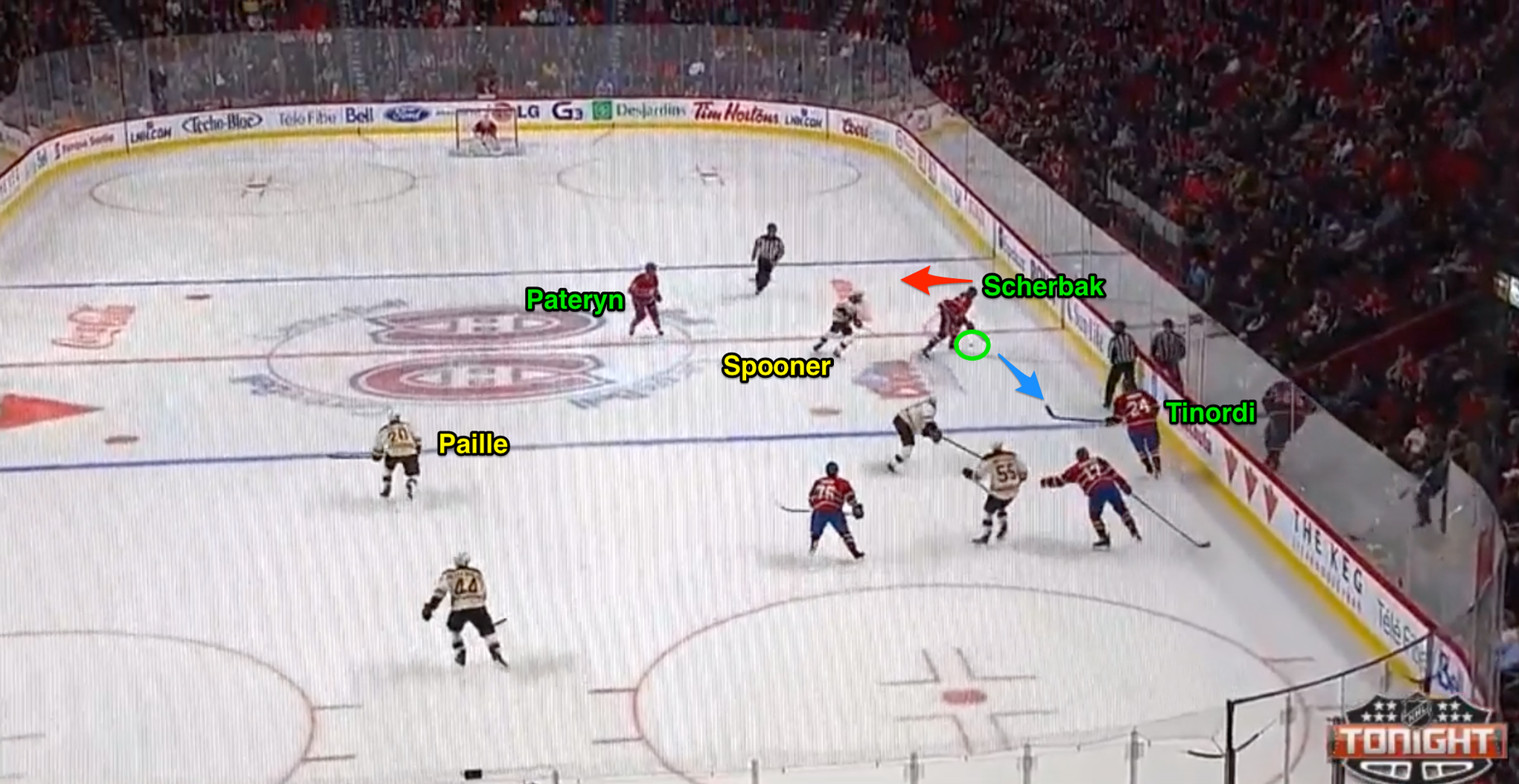 Gagne made a poor play up the boards that went right back to Scherbak, and although Tinordi is behind the play, the Canadiens are in really good positions here. If Scherback would hold the puck for a half second longer, he could follow the blue arrow's suggestion and pass to Tinordi at the blueline, who could either dump the puck or wait for Hudon and Bourque to get onside and carry it in. Instead, he goes the route of the red arrow, trying a "safer" pass to Pateryn. Spooner has made a good read though, and cut that pass off. 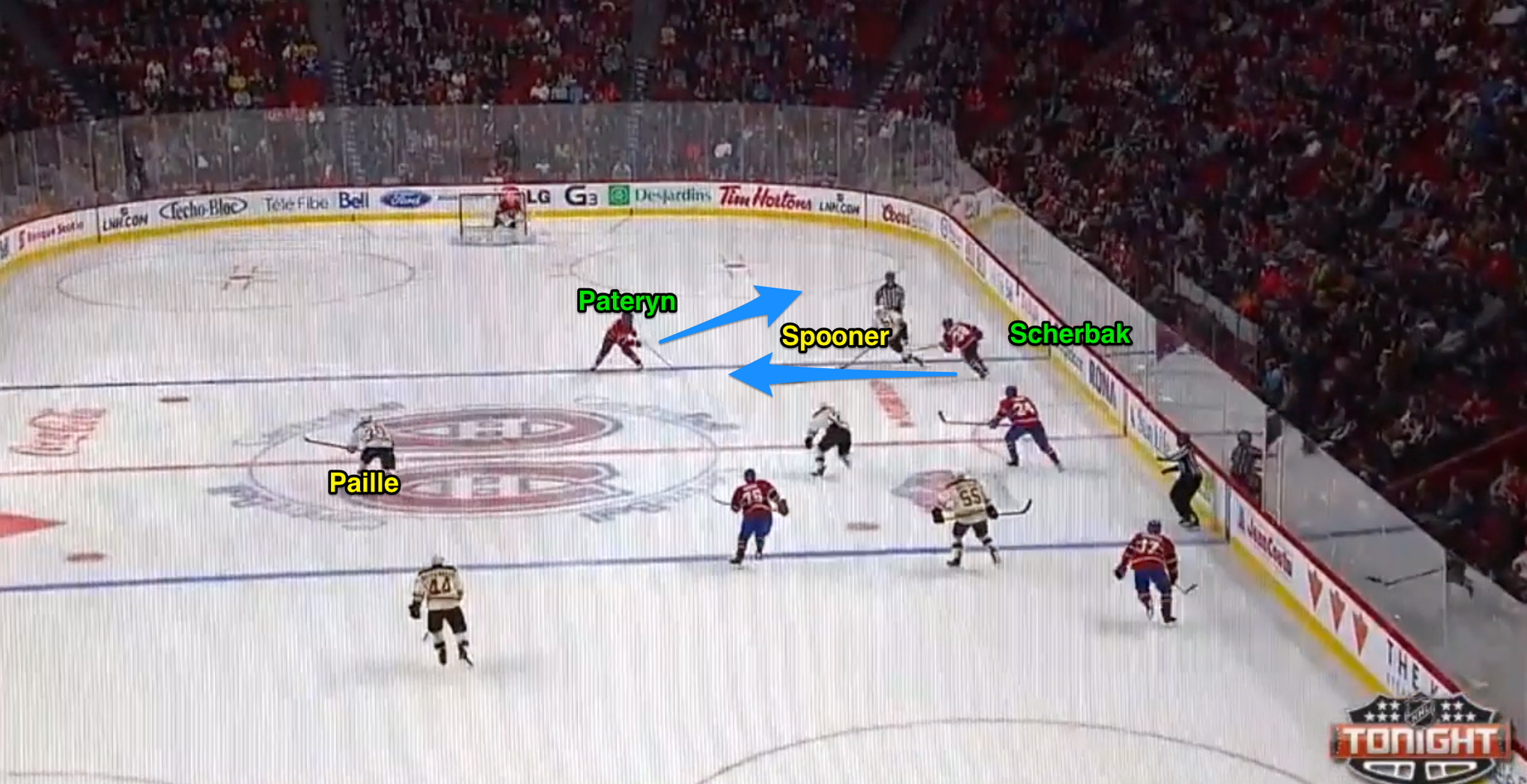 Spooner now has the puck on nice semi-break ahead of Scherbak, but Pateryn is in good position to cut him off while Scherbak cuts to the middle to block any attempted pass back to Gagner or Paille. 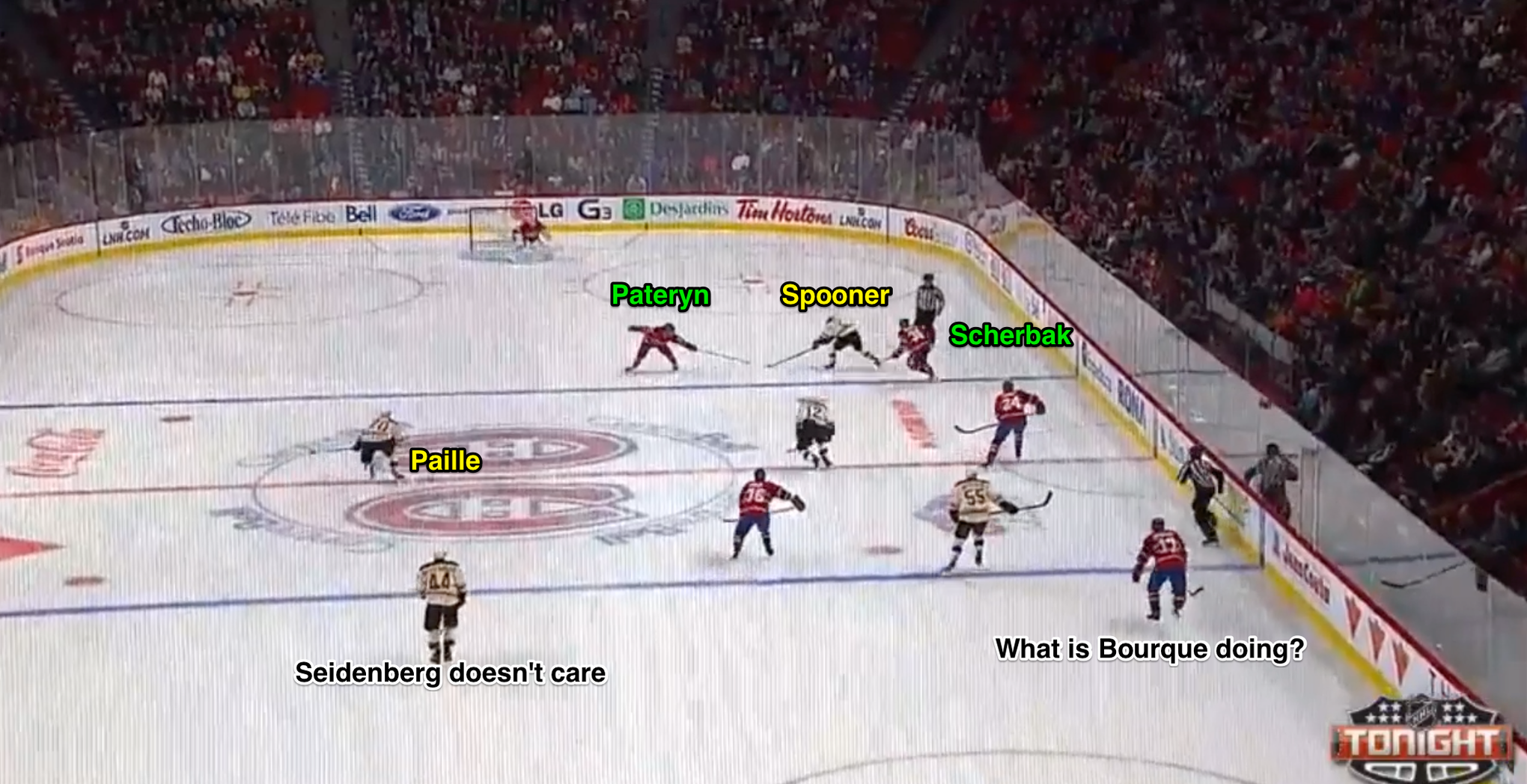 You can see from the angle of Scherbak's skates here that he knows what he has to do, and he's going to try to blast across to take away the pass. Unfortunately though, Pateryn is playing Spooner like there's a 2-on-1 when Paille is more than a full zone away. He can't make the decision to commit to checking Spooner 100%. 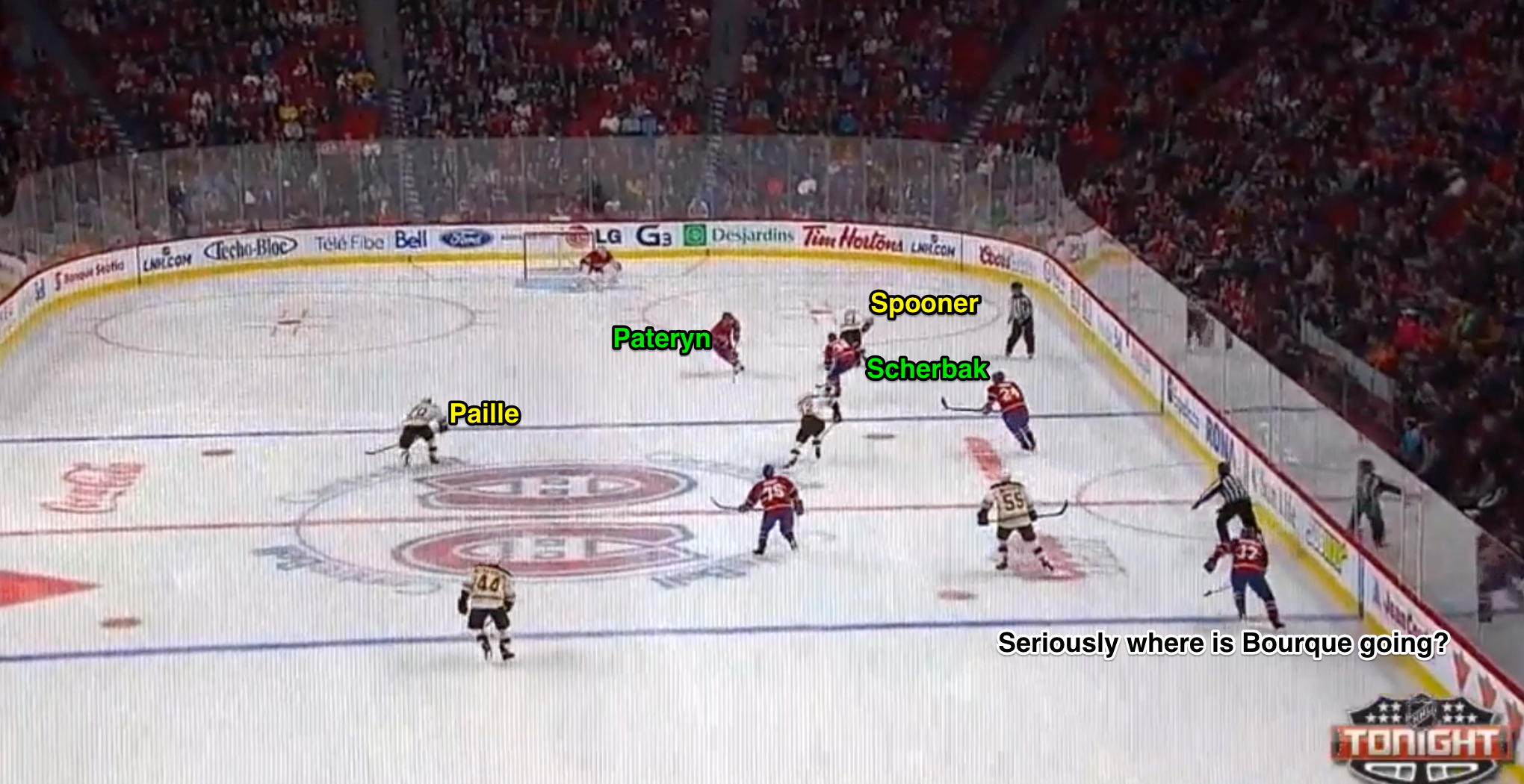 Scherbak has cut off the passing lane to Gagne, but Pateryn's lack of commitment has given Spooner a step on the defenseman, so Scherbak changes his angle and goes into chase mode on Spooner. 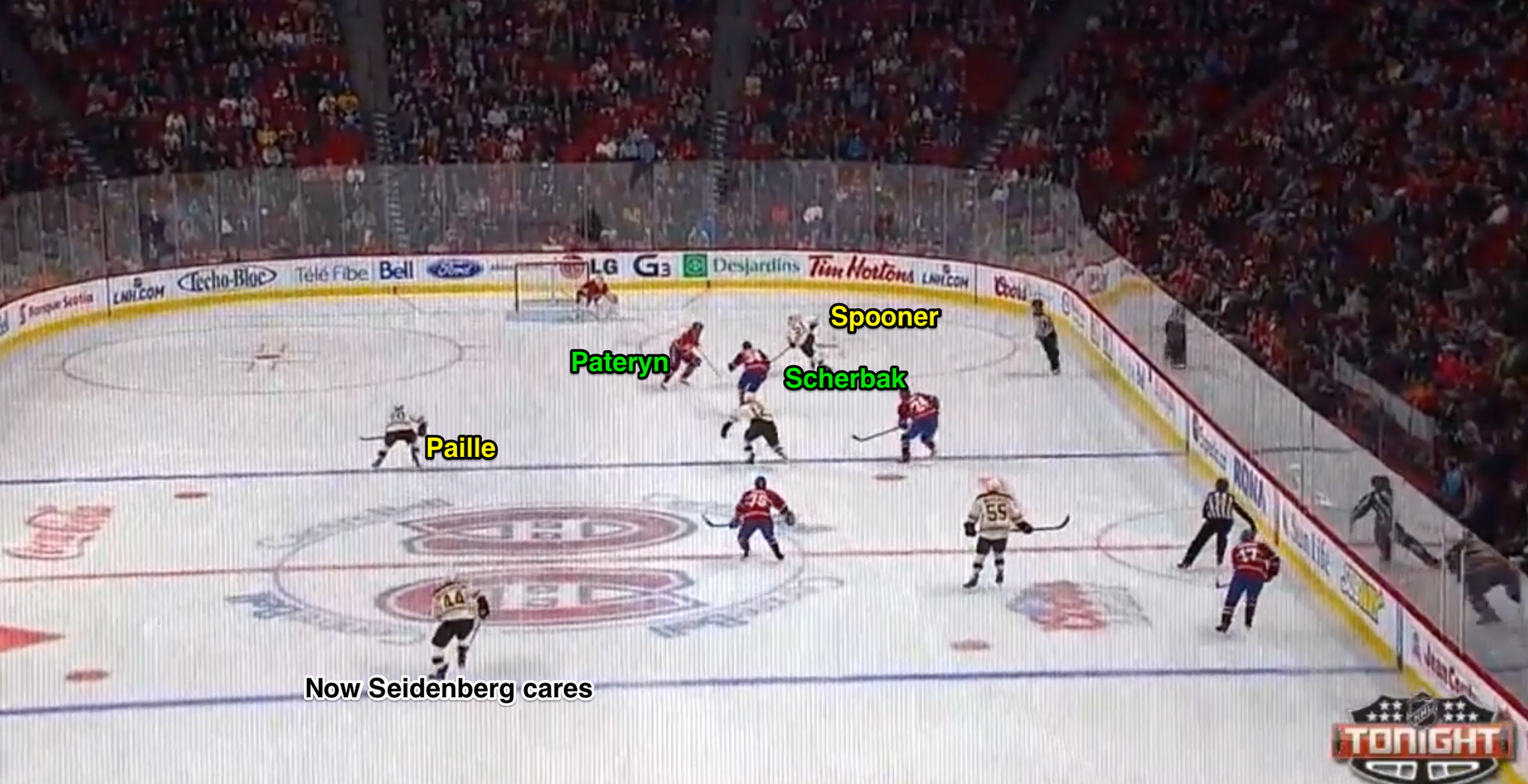 Pateryn got caught leaning towards Paille and now Spooner drops his shoulder as he gets ready to drive across the net. Any notion of defending the play is pretty much dead at this point unless you take a penalty, and Spooner knows it. 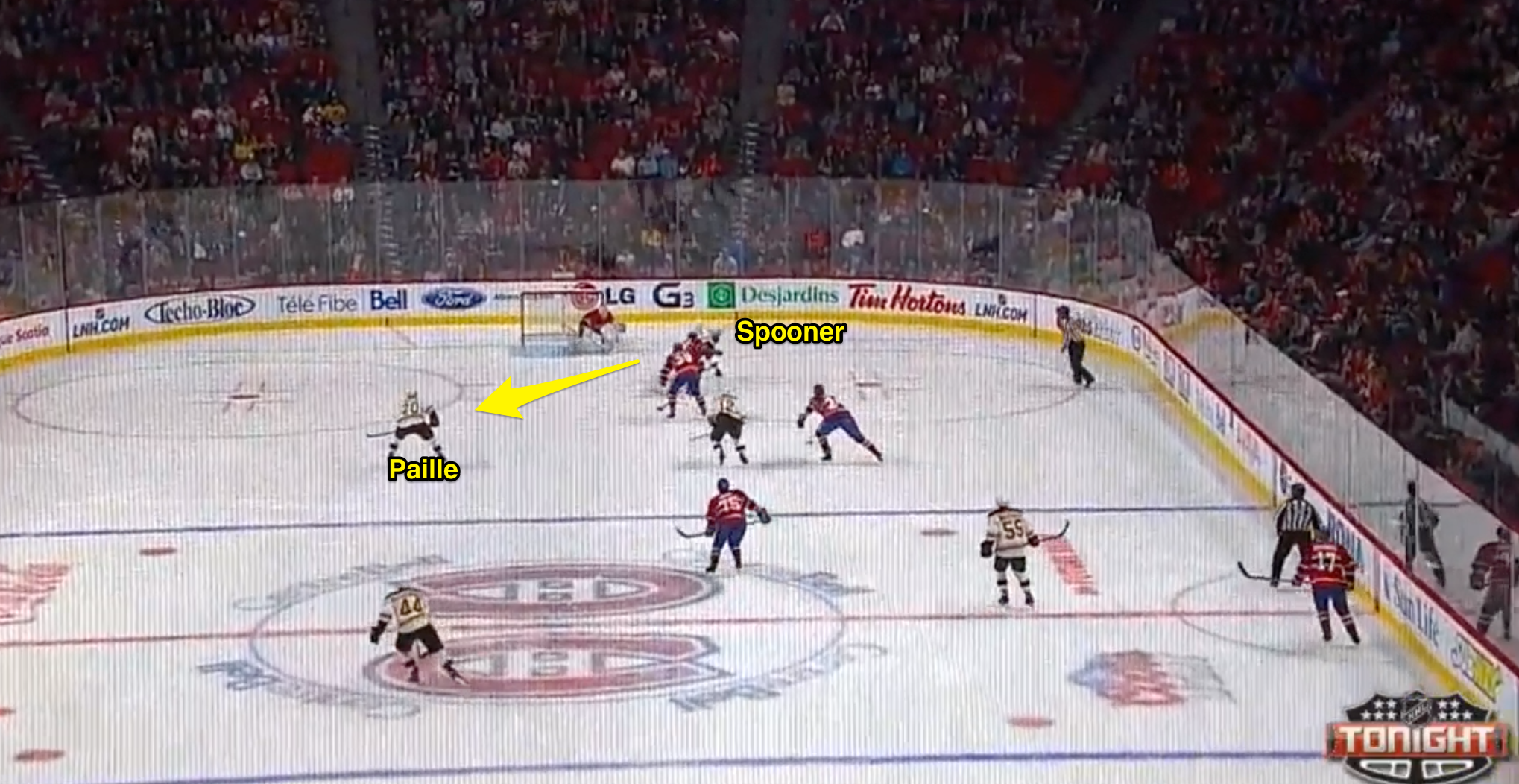 Pateryn has not only lost his check on Spooner, but he confused Scherbak into changing his check too. Indecisiveness is absolutely killer at this level. In fact, if Spooner wanted, he could likely feather a nice pass to Dan Paille for a shot here too, which would probably also be a goal since Tokarski is focused on Spooner. 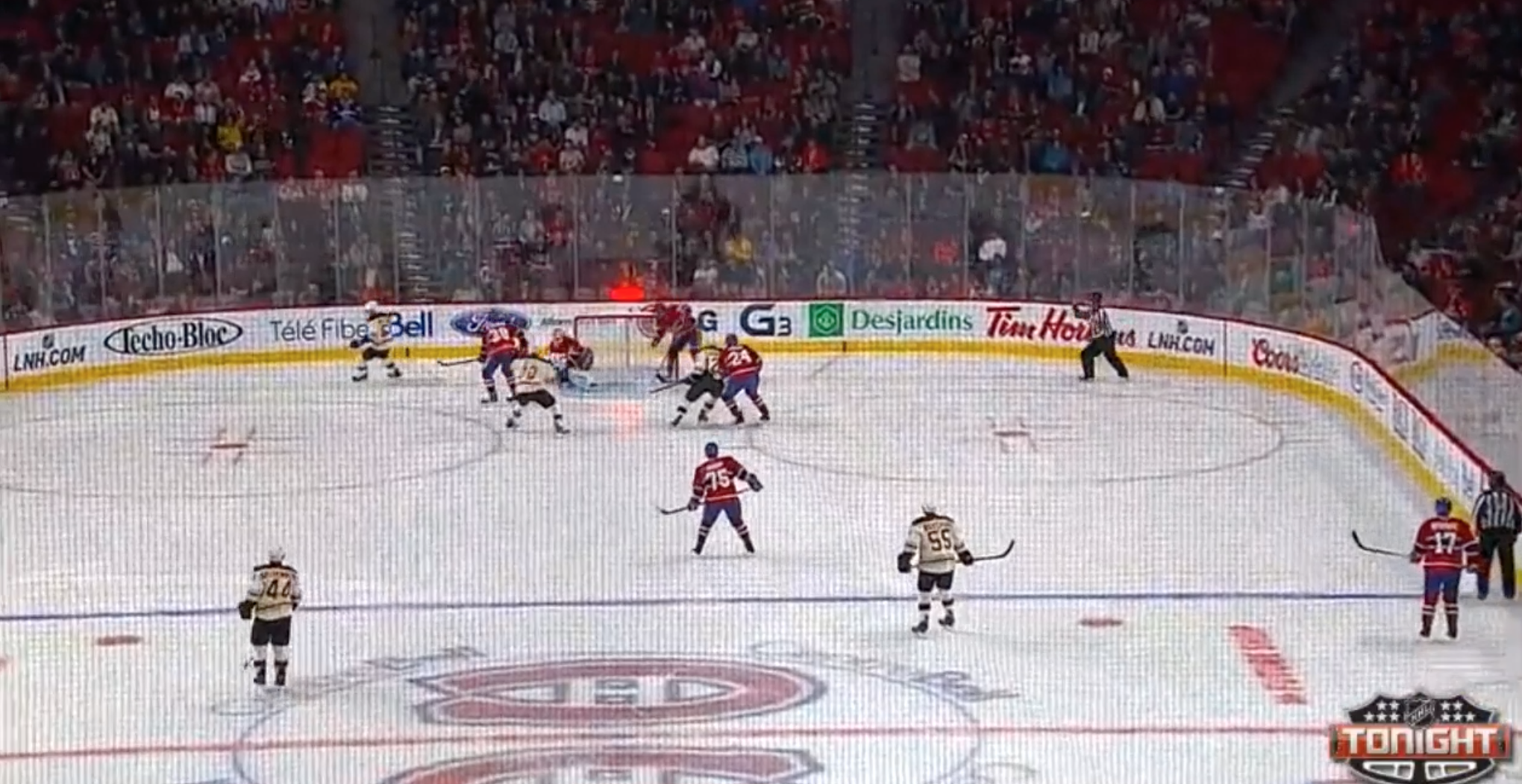 And it's a goal. It's preseason and it's expected to be messy, but this is a good example of "not NHL level defense".