The 'swarm' defense technique can work, but only if applied properly

In our third breakdown of the year, we'll take a look at what led to Carey Price being abandoned, and forced to make a fantastic save.

Share All sharing options for: The 'swarm' defense technique can work, but only if applied properly

In yesterday's game versus the Blackhawks we were treated to a ridiculous save by Carey Price, which has become the standard for him. Once we digest the save, it quickly becomes apparent that Duncan Keith shouldn't have had so much time in such a valuable scoring position. What went wrong? Let's take a closer look. 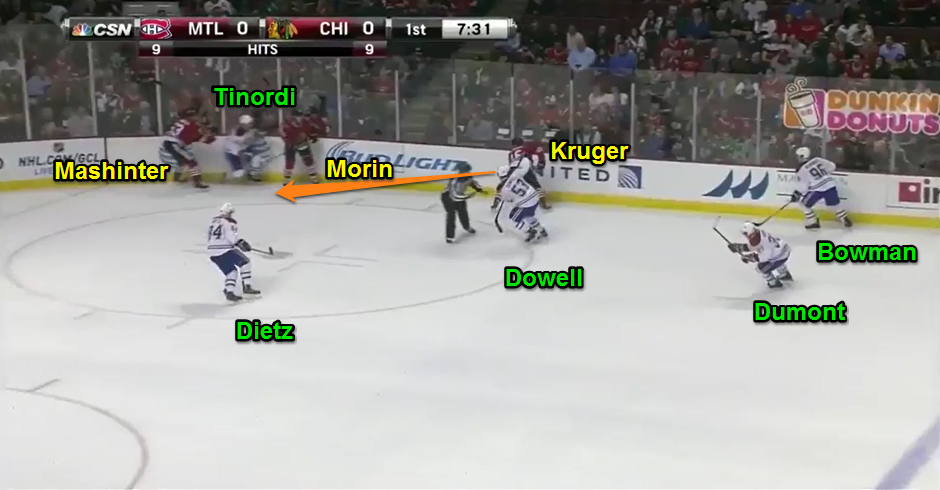 The play starts innocently enough. Marcus Kruger has the puck on the boards, and quickly shuffles it in towards the the two Blackhawks that are deep. 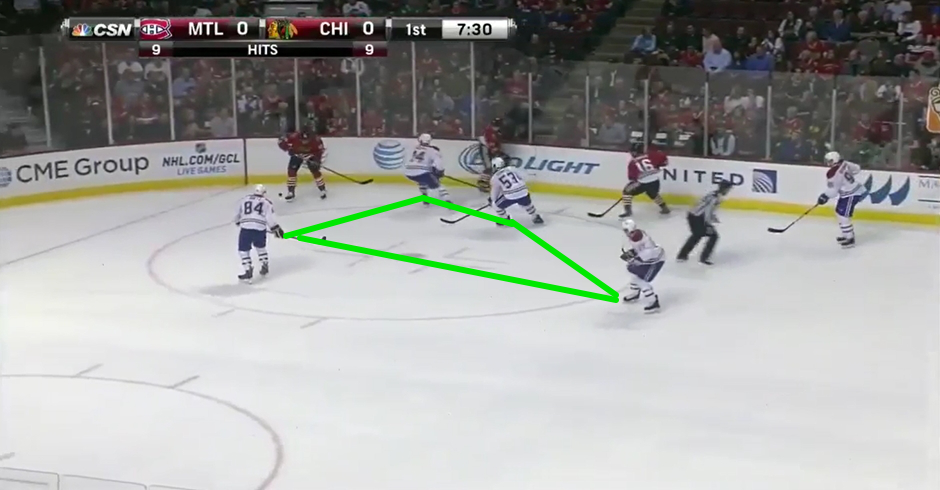 At this point, the Habs are in a decent position. They control the center of the ice, and are keeping the Hawks to the outside. 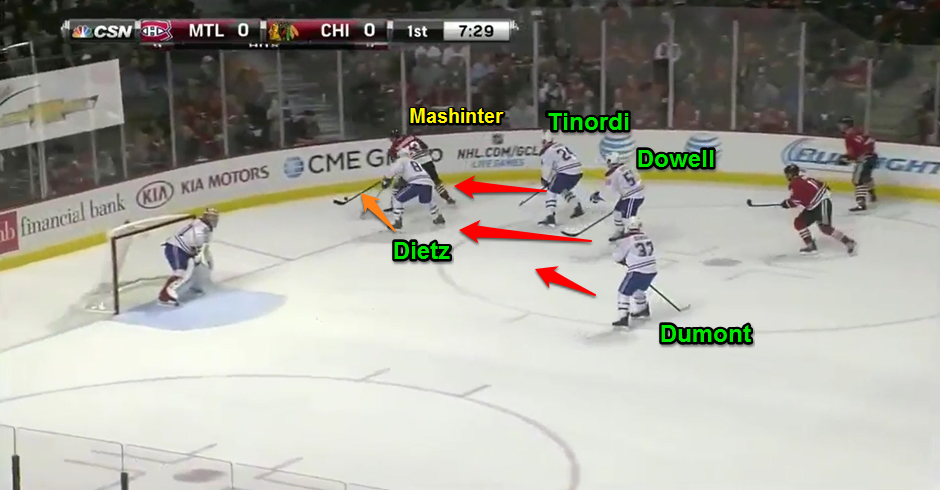 Swarm! Swarm! Swarm! With Dietz already picking up Mashinter, there's really no need to swarm here, however it's one of Montreal's preferred strategies. Here's the thing with that strategy: It has to work, or else there are usually severe repercussions. 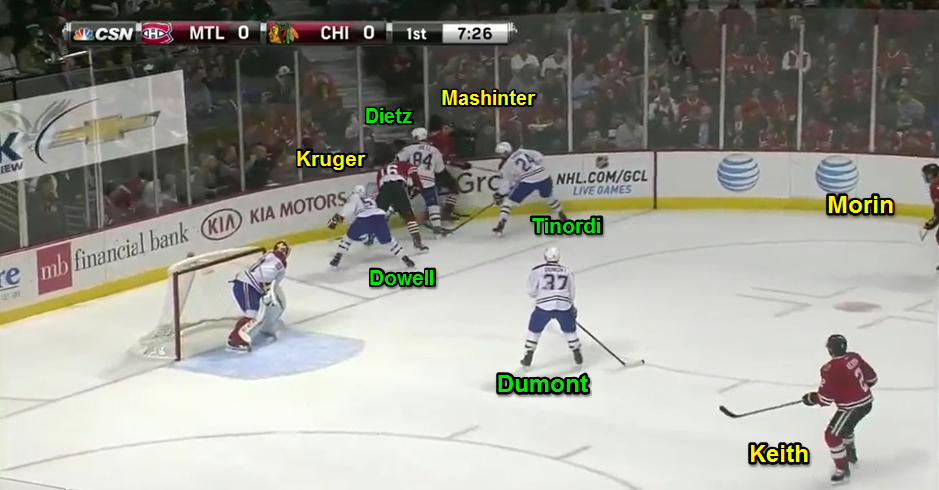 Marcus Kruger sees that Mashinter is in trouble, and quickly comes to the rescue in an attempt to deny the Habs swarm. 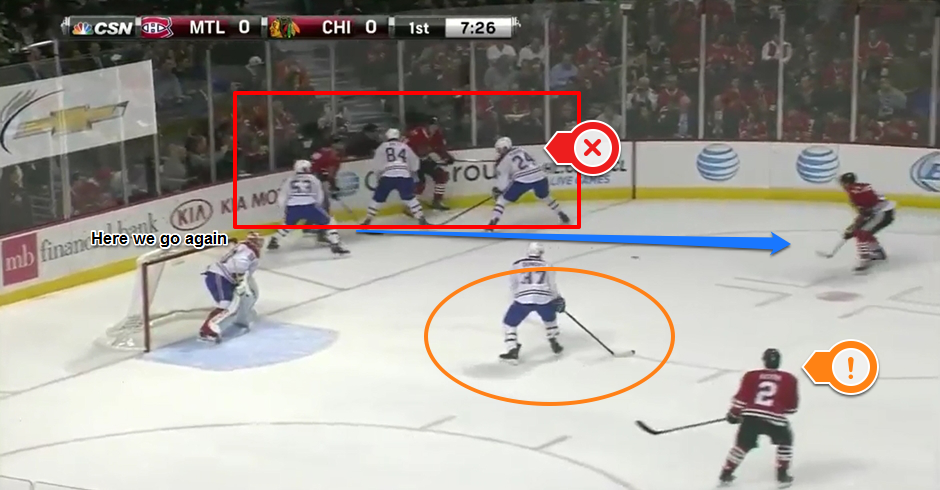 Mashinter outworks Dietz and Tinordi, gets the puck to Kruger, who evades a rather weak stick check by Jake Dowell. Drayson Bowman completely abandons the play, which leaves Gabriel Dumont in a precarious position. He's the last man back, and with both his defencemen behind the net, has no choice but to play a zone defense. 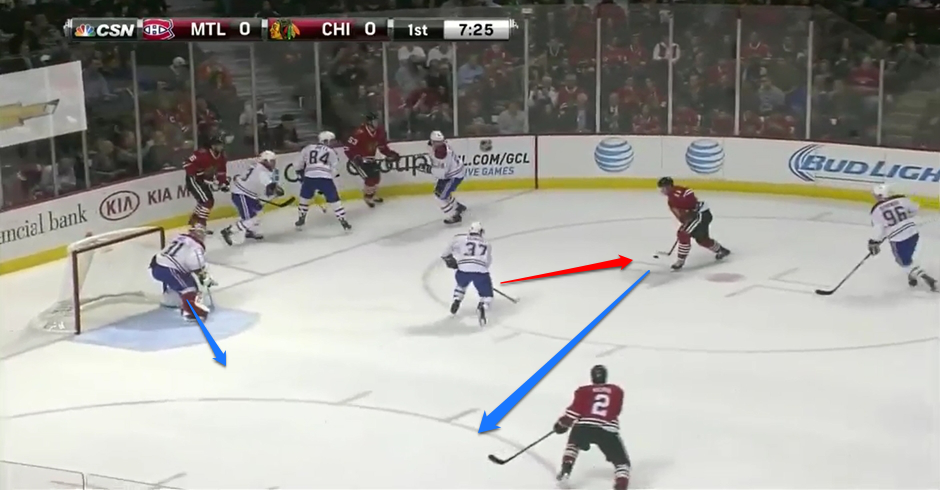 Did I say zone defense? I meant, "Screw it, rush the shooter/passer, we'll figure out the rest later." Dumont tries to rush Morin, but he's too far away. The best call would have been to place his stick in the passing lane, as opposed to the shooting lane. In Dumont's defense, he was in a lose-lose situation. If he blocks the the shot, he opens up the pass, if he plays the pass he allows Morin a high scoring chance. He gambled, and lost. Bowman on the other hand doesn't even show up to the table. 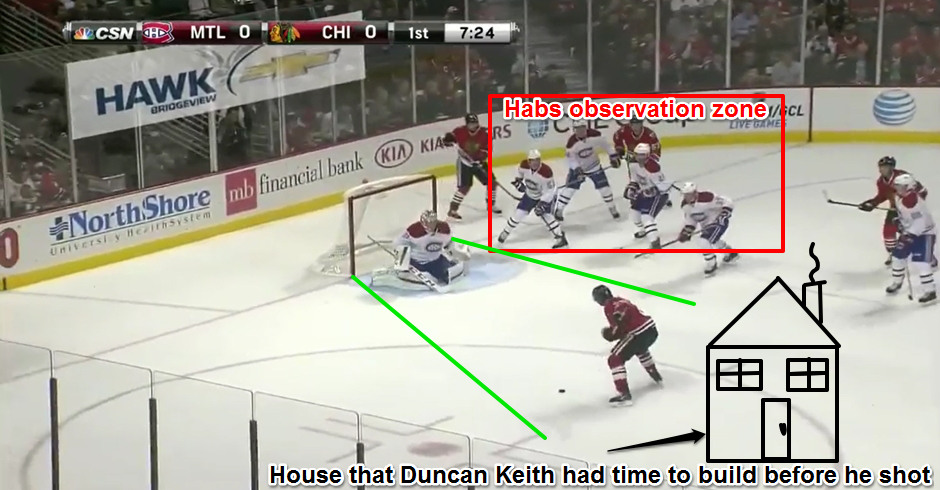 Price anticipated the pass very well (due to a lot of experience being in this particular situation), although he fumbles a little when he pushes off his left post. This leads him to be down a little early, making the save on Keith that much more impressive.

A few things are worth noting in this play. For one, Carey Price has way too much practice with this exact play, and can see it coming from a mile away. He managed to make the save even if he was down too early, although if we're being fair Keith's shot didn't have the best shot placement possible.

Drayson Bowman is completely lost, since he doesn't pick up on the swarm strategy. He should be in most of those frames, but isn't. And that, in essence, is enough to render this the swarm defense useless. Every single player has to be in on the play.

Thankfully, this happened during the preseason, although Habs fans have seen this exact same scenario several times in the past.

Even though there were several rookies on the ice for the Habs, this wasn't Patrick Kane and Jonathan Toews that created the play; it was Brandon Mashinter and Marcus Kruger. Hopefully the Habs can limit their use of the swarm to appropriate situations as the season rolls out, or at very least make sure everyone is on board before applying it.