The Canadiens surrendered a 3-0 lead to Ottawa before pulling out an overtime victory. I break down what was the worst defensive breakdown of the night here.

Early in the season, I ran a series called Breaking Down Film (you can read all of the past posts here) which looked specifically at things that lead to goals against or general technical or tactical breakdowns that needed to be remedied. Unfortunately, being a full time student with a job, the series fell by the wayside for some time. Well if there was one positive from Thursday's game against the Senators (other than Carey Price's amazeballsness and Subban's OT winner), it was that it inspired me to dust off the ole' series and look specifically at the Senators' second goal, which occurred only seconds after their first. You can watch the goal here:

Now let's break down exactly what happened, and let's start with the faceoff following the goal. Against a line centered by the Senators' top offensive player and captain in Jason Spezza, Head Coach Michel Therrien opted to put out his fourth line of Brandon Prust, George Parros, and Travis Moen (UPDATE: Turns out it was an icing that forced this matchup, but putting out the fourth line right after a goal against was still playing with fire). The idea behind this, I would imagine, is that Therrien felt his team - which had been badly outshot to that point despite building its lead - needed an energy shift to change the momentum. The issue is that what the Canadiens needed wasn't energy, it was defensive structure and competent transition play, neither of which this line was likely to provide. On the brightside, Therrien put top defense pairing P.K. Subban and Josh Gorges behind his grinders, and not the likes of Douglas Murray or Francis Bouillon. That said, let's look at what happened. We pick up the action with a defensive zone faceoff in front of Carey Price. 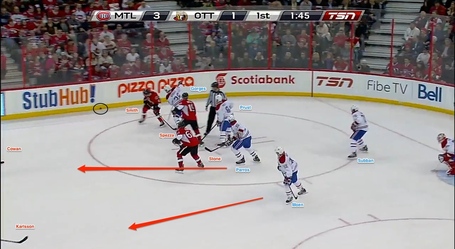 The most common defensive zone faceoff setup is five across, which is pretty self-explanatory. All five players set up level with the puck, and the defenseman will have to hustle to retrieve it if the faceoff is won. The Canadiens, however, prefer to set up with Subban slightly behind, making it easier to transition quickly. Off the lost faceoff, the wingers will rush out to take the two points - Parros will ideally give Mark Stone a shove as he goes past. Prust's job is to stick with Spezza, and Gorges to do the same with Zack Smith (and in this case attempt to get the puck). Subban needs to move up to take Stone. 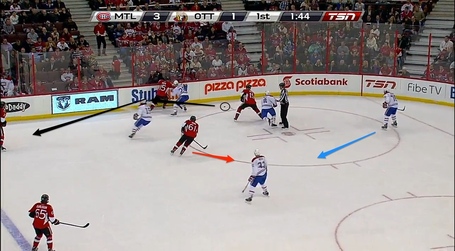 The puck movement here from the Senators is really sharp and I'd presume comes from a set play. Spezza fends off Prust to recover the puck off the boards, and quickly rims it around to the point with Jared Cowen. All of the Canadiens are doing their jobs at this point - although the lost puck battle along the boards isn't ideal - as Subban is about to move up and cut off Stone at the hashmarks. 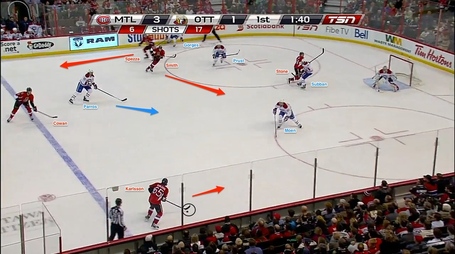 Cowen continues the cycle over to Karlsson, who is obviously the catalyst for this play (which seems like something one might draw up in an EA Sports NHL game). Smith cuts towards the middle, and Parros, seeing this, drifts towards the slot to try and cut off a potential pass. Spezza heads to the point, as it appears the Senators are rotating as one might on a power play. Ideally, Parros would stay high and cut off the pass to Cowen or Spezza, but he doesn't see the latter creeping up behind him, and (rightfully) guesses that Prust and Gorges are too far behind the play to cut off Smith. 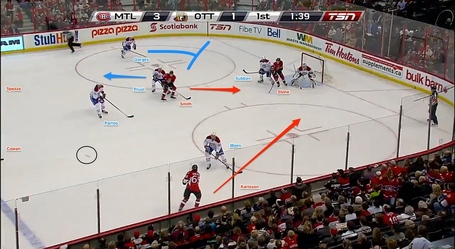 Here's where communication comes into play. With Parros now in no-man's land, Erik Karlsson threads a pass through to Spezza on the left point. At this point, confusion ensues because Spezza is Prust's man, but Prust has now engaged with Smith in the slot. Gorges is slow to get back in the play, and although he's the closest guy to Spezza, as a defenseman he needs to get to the net-front to help out Subban. Prust decides to rush out to meet Spezza, and Gorges isn't quite sure what's happening and winds up in no-man's land himself to the side of the net. What needs to happen is that one of Gorges or Prust shouts to the other to switch, so that Gorges knows where to go. Moen, once Karlsson makes a pass, should drop off to be able to help a little more in the middle of the ice, and of course to get a jump on Karlsson if he decides to rush the net. But of course he doesn't. He stays too close to the star defenseman, and isn't able to react quick enough once he realizes what's happening. 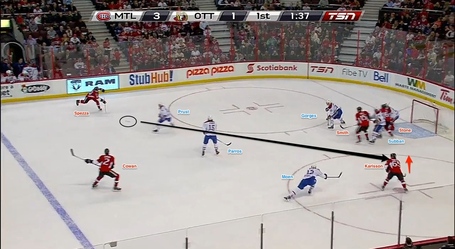 At this point the play is broken. Subban is having to contest with two large forwards near the crease because Gorges is doing nothing other than maybe screening his goalie. Prust, Parros, and Moen are in a straight line parallel with the net, which you never want (if Parros isn't defending the passing lane through the slot he should at least be closer to Cowen to cut off a potential one-timer). Prust isn't able to block Spezza's slap-pass as it goes through his legs, and of course Moen is beaten cleanly on the right side. Karlsson has a gaping open net and there is nothing Price can do. 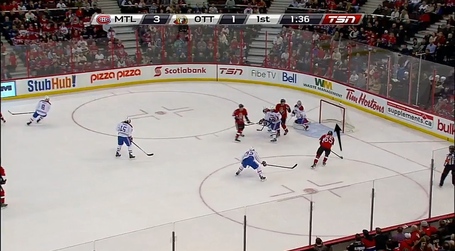 It's easy to blame the play entirely on Moen, and that wouldn't be too harsh. He's known as a defensive guy and a breakdown like that shouldn't happen against a player as dangerous as EK. That said, nobody (except maybe Subban) is blameless on this play. Prust doesn't communicate. Gorges isn't decisive enough in getting back to help. Parros doesn't do a good job of pressuring the point or covering anyone, and it all leads to a far-too-easy goal. When you talk about a play being "just as we drew it up", this is what we're talking about from a Senators perspective. Paul MacLean must have been absolutely thrilled. There are few better feelings as a coach than having a play you drew up come to fruition. As for the Canadiens, there's work to do.