Carr joined the Habs in December, and the rookie quickly drew warranted comparisons to Brendan Gallagher.

Following a fantastic NCAA career which saw him score 79 goals and 78 assists in 160 games for Union College, Carr was signed as a free agent by the Habs. He showed immediate promise at the professional level, both with the Hamilton Bulldogs and the St. John's IceCaps.

Opportunity came knocking for Daniel Carr in early December, and the young forward definitely answered. He scored during his first game, on his first shot, and first shift. Not bad.

His first few games saw him on the fourth line alongside players like Brian Flynn, Torrey Mitchell, and Christian Thomas. He quickly graduated to the third line, with David Desharnais and Dale Weise. However it was once he was placed with skilled wingers that he really started coming into his own.

This speaks to the value of placing young players in a position to succeed. Most coaches will force a youngster to play a lesser role in the NHL compared to the plethora of ice time they're used to in the AHL, and that's simply not conducive to scoring.

In Carr's case, he seemed to take over for the injured Brendan Gallagher, and there's no denying that he did a fantastic job despite being a rookie.

Carr's sample size is definitely smaller, but it goes to show why he quickly endeared himself to the coach. He actually shoots on average from closer to the net than Gallagher, which is quite the feat.

He ended up with six goals and three assists in 23 games, which is a 21-goal pace if you prorate it over 82 games. Again, quite impressive for a rookie.

But again, this shouldn't come as a surprise for anyone who's followed Carr's progression. All he seems to do is score. If you go to the net, good things will happen. Carr goes to the net. A lot.

That's not to say that you should mark down Carr as a guaranteed 20-goal scorer for the Habs next year, but the potential is definitely there. He could even surpass that mark if he remains healthy and is given the opportunity to play in the top six.

Essentially, he played hard, his results were very encouraging, and the analytics support giving him a guaranteed spot on the roster next season. 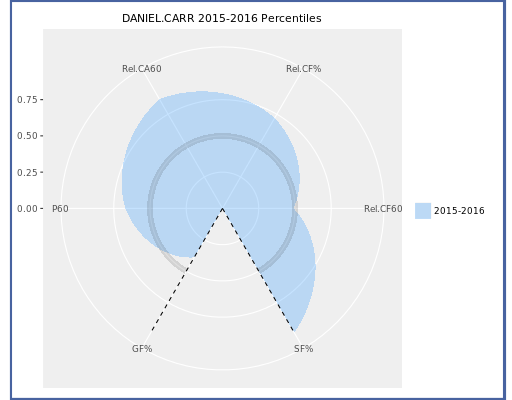 Which brings us to the question, where does Carr fit in the lineup?

His versatility is an asset, seeing as he can play on both the left and right wing. This could end up being Carr's trump card heading into 2015-16, and may see him thrust into the top six once injuries hit.

I mention injuries, because realistically speaking I'm not convinced the Habs can, or rather should, count on Carr repeating his fantastic rookie season. Ideally, he seems to be destined as a fantastic third line winger next year, with the potential to crack the top six, which isn't a slight towards Carr. He has only played 23 games in the NHL, meaning we'd be best off tempering our expectations moving forward.

Carr is a restricted free agent this summer, and he'll probably sign a contract in the $1M range, which will end up being a bargain no matter where the Habs use him. He's arguably Montreal's second-best option on the left wing, behind only Max Pacioretty, especially now that Alex Galchenyuk has been returned to his natural position.  Of course, the Habs will be looking to upgrade their wingers this summer, but as it stands Carr is in a good position on the depth chart.

A potential third line of Artturi Lehkonen - Lars Eller - Daniel Carr is worth considering, seeing as they're all responsible defensively, and have the ability to dominate the puck. Of course, I'm getting too far ahead of myself at the moment, but the fact of the matter is that Carr gives the Habs some much needed options on the wing heading into 2016-17.

Regardless of where he ends up, Carr should provide the Habs with goals, scoring chances, energy, and fantastic value on the salary cap.