Why the Dane is Great: The case for Lars Eller

Understanding the value and effectiveness of Lars Eller

Share All sharing options for: Why the Dane is Great: The case for Lars Eller

If you follow the Habs at all, you know that Lars Eller has a rather polarizing effect on the fanbase. If you follow EOTP, you'll know that our staff tends to view him in a rather positive light, and has for some time.

While GMs around the league have long shown interest in the Great Dane, writers and fans alike often criticize him for lacking in hockey sense, not scoring 20+ goals a season, and inconsistency (among other things), without seeming to take into account the role he has assumed on the team.

To understand Eller's value and to develop reasonable expectations for him, it is necessary to understand his role and deployment on the team. Once you take a look at that, it becomes much easier to understand and accept his offensive output for what it is.

Whatever Michel Therrien's  other shortcomings as a coach are, he clearly understands the defensive wizard he has in Eller. Therrien entrusts a lion's share of defensive zone starts to Eller. Among players who played more than ten games, only Manny Malhotra, Torrey Mitchell, Jacob de la Rose, and Brandon Prust have fewer Offensive Zone starts at even strength.

Given that Mitchell and Malhotra were essentially employed to win faceoffs in the defensive zone, before rapidly leaving the ice, it is not surprising that they took the most defensive zone faceoffs, but played the least per game. Eller, De la Rose, and Prust, on the other hand, had other responsibilities, namely to get the puck out of their own end, generally against stiff competition. It is here that Eller's other defensive strengths show themselves.

His transition game, together with his strength in the faceoff circle (51.7%), ability to drive possession, and to make successful passes, make him an ideal player in his own end. The chances are statistically quite good that he'll get the puck out; though he only started 37.1% of his shifts in the Offensive Zone, he ended 48.8% of them there.

He did all this while playing a shutdown role against players such as Sidney Crosby, Evgeni Malkin, Patrick Kane, Anze Kopitar and Alexander Ovechkin. Moreover, he accomplished this task with a wide variety of bottom six linemates, including the black hole that was Rene Bourque. I will always fondly remember the January 3 game where Eller and his line made Crosby and Malkin run around their own zone for entire shifts at a time.

For some perspective as to the disadvantage Eller faces in zone starts and linemates, at even strength, David Desharnais played 21.82% of his ice time with Max Pacioretty and Brendan Gallagher, 18.03% with Pacioretty and P.A. Parenteau, 16.37% with Pacioretty and Dale Weise, and 8.15% with Galchenyuk and Gallagher. He started 59.58% of his 5-on-5 shifts in the offensive zone.

Eller, on the other hand, spent the most time (22.15%) with Jiri Sekac and Prust. His second largest percentage of time a with de la Rose and Devante Smith-Pelly (10.44%), 4.66% with JDLR and Weise, and of course, the largely disastrous 4.2% and 3.57% with Rene Bourque and Sekac, and Bourque and Weise respectively. All this while starting 37.48% of his shifts in the Offensive Zone.

While Sekac, Prust, JDLR and Smith-Pelly all proved to play well in their own end with Eller, Weise was middling, Bourque was abysmal, and none of them were exactly scoring powerhouses. Which leads us to the next issue, Eller's lack of scoring.

While even Eller's critics seem to be accepting Eller's defensive value more, there is a persistent belief that Eller is a disappointing and inconsistent accumulator of points. Now the inconsistency can hardly be argued, and two years in a row now, Eller himself has talked about needing to be more consistent. However, there are a number of factors which ought to be considered before deciding that his offensive output is, in fact, a disappointment.

Given the scoring woes of anyone on the team not named Pacioretty, Plekanec, Gallagher or Galchenyuk, Eller's contribution, while not spectacular, was nothing to scoff at given (as mentioned above) his deployment and his linemates. All told, Eller's most frequent linemates only scored 21 goals between them. Of those goals, most of Weise's nine were scored with Pacioretty, not Eller. This unfortunate state of affairs meant that Eller didn't have a lot to work with in terms of collecting assists.

Of Eller's 12 assists, only two (both Sekac goals) came from his usual wingers. The rest came from Subban (three), Pacioretty (two, both short handed) Gallagher, Desharnais, Bournival, Petry, and Emelin (one each).

In addition to playing with bottom-six wingers (who were, themselves, struggling to score) in very tough defensive minutes, often against the best lines of other teams, Eller got almost no powerplay time. In fact, over the course of the year, he only played 35.1 minutes (roughly .46 minutes per game) but still collected a goal and an assist- contrast that to Desharnais' 195.52 minutes (2.4 minutes per game) with two goals and nine assists.

Shorthanded, Eller was tied with Plekanec for second in points (two assists) among six players.

At even strength, Eller had 13 regular season goals and nine assists - good for fifth on the team behind Pacioretty (22 goals, 20 assists), Gallagher (18 goals, 15 assists), Galchenyuk (15 goals, 17 assists) and Plekanec (14 goals, 19 assists). Given that Eller played with worse wingers and in harder and fewer minutes than all four of the players in front of him, I have a hard time considering this output a disappointment.

All told, Eller's 15 regular season goals are still good for sixth on the team (behind the same four forwards and Subban), and tied with Desharnais, despite the later's easier zone starts and better linemates. Of course, one could argue that most of the Habs roster could score more, but that would be, by and large, a systemic issue rather than an individual player issue.

Moreover, Eller has a habit of scoring when it counts, not just in the playoffs. This year, of the 15 goals he scored, seven of them were game winners, including the overtime winner in Carey Price's record breaking 44th win. Among centres who had similar zone starts (in the 37% range at even strength), and who played a significant number of games, Eller produced comparable number of points.

Comparing Eller to other "typical quality third liners" (as Marc did previously), turns up similar evidence. His work is comparable with that of his peers, and it's hard to put up big points if you're buried in the defensive zone. 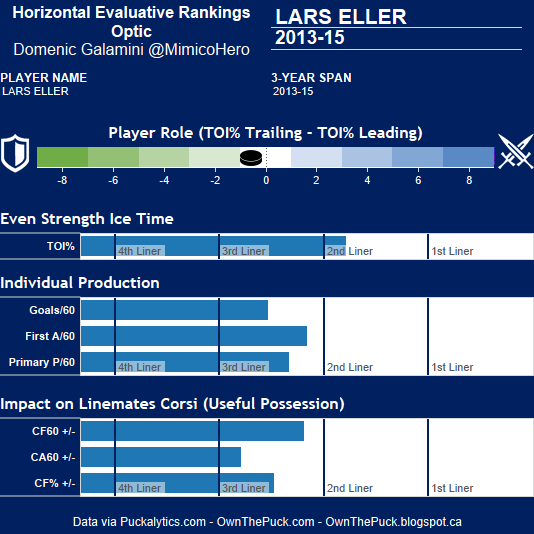 So unless his deployment changes, or he gets better, more consistent linemates, it would be wise to accept Lars Eller as he is. In fact, we should be incredibly grateful that he's able and willing to take on this largely thankless and herculean task as well as he does.