A lot has been made of Kirby Dach’s inability to consistently win faceoffs in his young career – and especially last season, where he ranked last in the NHL in faceoff win percentage. Reading many comments and discussions on this topic made me think: how bad was Dach’s last season in a more historical context? Conventional wisdom seems to be that young players struggle more with faceoffs and improve with age and experience. Does the data confirm this trend, and can Dach’s struggles be explained by his youth? How did other young centremen develop after having very bad faceoff seasons? What could a reasonable projection for Kirby Dach’s faceoff performance be? I will try to answer and visualize all these questions based on a descriptive analysis of NHL data from the last 25 years (going back to the 1997/1998 season).

Before we begin, a quick introduction of myself. I’ve been a long-time lurker at Eyes on the Prize but have not actively engaged much – although I enjoy reading all the comments and discussions here. Living in Europe I find this community an amazing way to stay up to date with the Habs and the hockey world. I am currently studying Data Science in Gothenburg, Sweden and am interested in applying the things I learn to topics I enjoy. So, let’s get on with it!

Before we truly begin, a few words about the data that is used for the analysis here. I accessed the NHL API to create a database with all player game data going back to the 1967/1968 season. This is mostly based on the "Boxscore" access point of the API. What this means is we can get stat summaries for every player in a single game, such as TOI, goals, shots, faceoffs etc. Here is an example of such a page for a Habs-Bruins game from last season, in case anyone is interested. In total, this database now includes nearly 2 million rows of data. For the following analysis, we will only use approximately half of this data, going back to the 1997/1998 season, the first for which faceoff data is available.

The first thing we should do is put Kirby Dach’s 2021/2022 season into a historical context: how bad was it really? The following graph shows every season-long faceoff percentage for every player with at least 500 faceoffs in that season since 1997/1998. The table below shows only those seasons with a faceoff percentage lower than 40%. This 500 faceoff threshold is of course a somewhat arbitrary cut-off point to only include "real" centres (and include Dach’s 2021/2022 season, where he took 545 faceoffs). 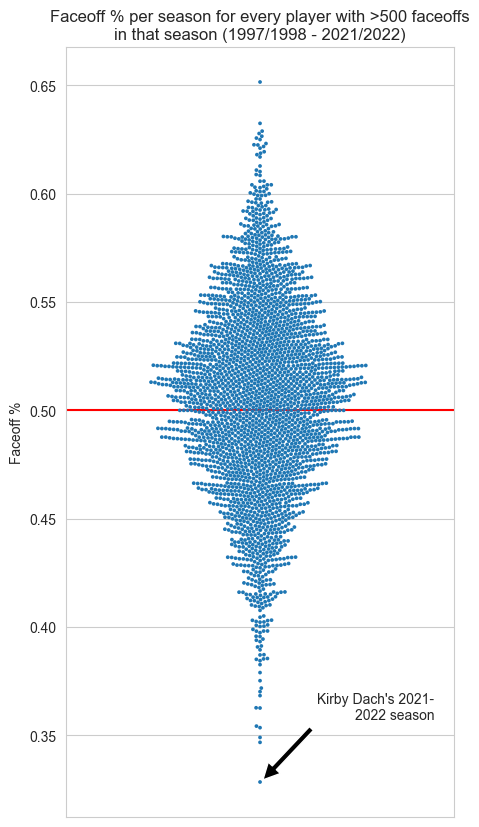 The following table shows us who else had truly awful faceoff seasons – and many very interesting names pop up (more on these comparables later on). Another observation is that 22 of these 32 seasons belong to players who were less than 23 years old at the start of that season. This leads us to the next question: are young players just bad at faceoffs, and do they improve with age? Conventional wisdom says yes, but let’s take a look at the data! 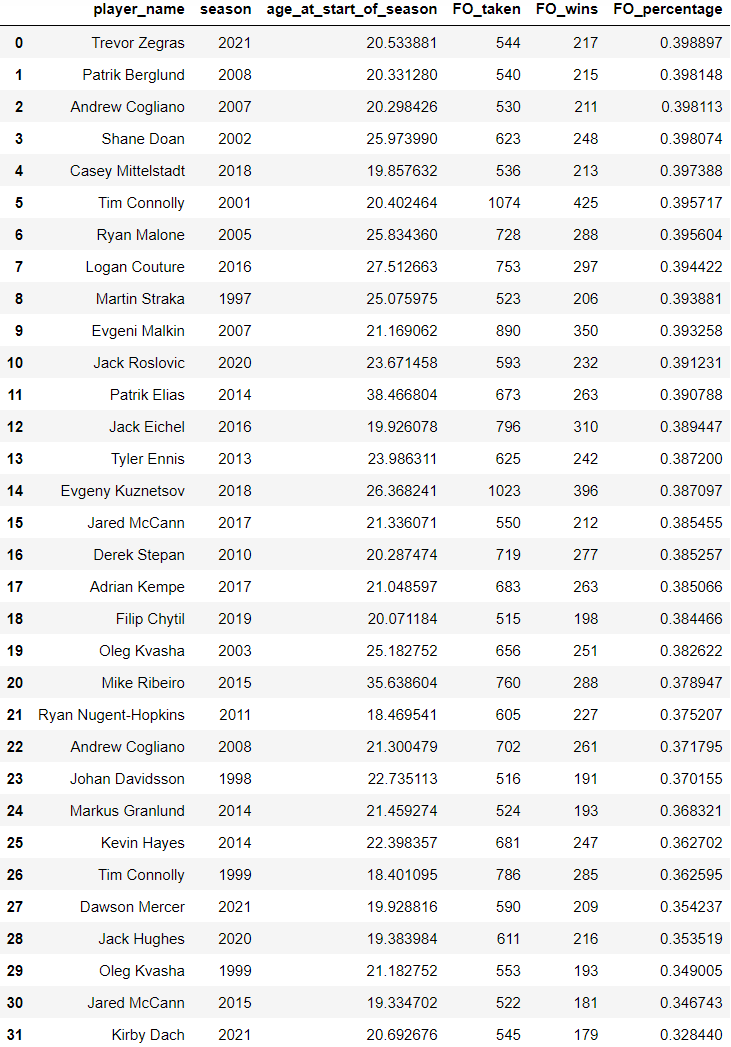 Before we move on, I want to make clear that all of this analysis is based purely on the data, and does not take any other context into consideration that could explain these seasons – Kirby Dach’s past wrist injury for example. My goal with this article is not to dump on Kirby Dach, but rather to show reasonable development paths based on historical comparisons.

Do players faceoff abilities improve as they age? Let’s first look at the average faceoff win percentage for each age group. 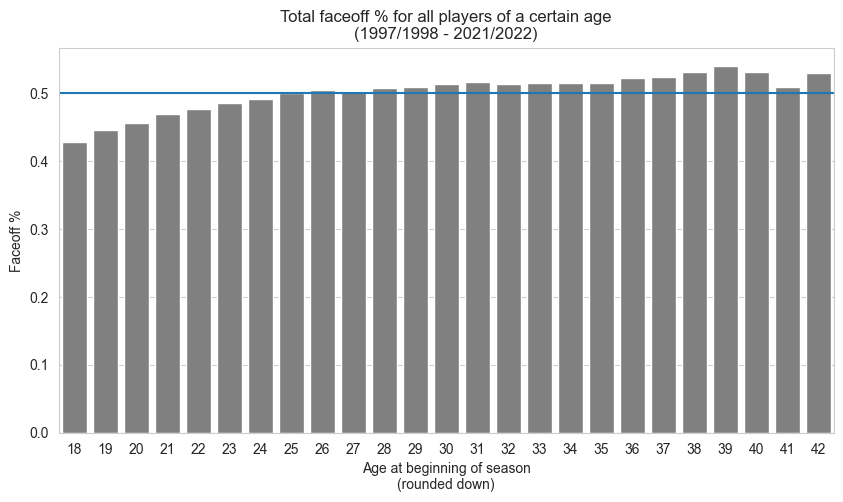 Conventional wisdom seems to be right; we can see that average faceoff win percentage improves as players age. The total number of players in these groups that actually take a lot of faceoffs differ largely, however. Therefore, the next graph shows the actual distributions for all age groups, similar to the first graph but now divided into separate groups (again only for players with >500 faceoffs in a season). (If the image shows up too small, you can try opening it in another tab). 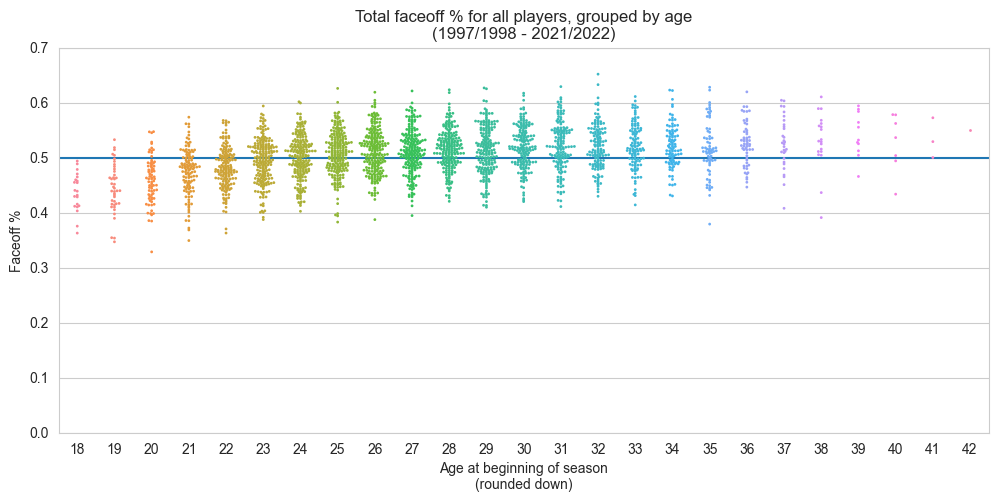 Again, we can see the clear upward trajectory from age 18 to age 25, after which the average faceoff win percentage remains relatively stable. It is important to note, that this does not actually prove that a players faceoff win percentage improves with age – the data points in the different groups don’t necessarily include the same players at different ages (it is likely that many do however). Additionally, this is a clear area where a certain survivorship bias is in play. If young players don’t improve their faceoff win percentage, they will likely not remain at centre and/or take many faceoffs and thus not show up in the numbers anymore at an older age. In other words: the older players taking faceoffs are those that have proven to be at least decent at it. This also explains the second uptick in average faceoff win percentage after the age of 35 – only the very best/effective players will still be in the NHL at this point, thus raising the average for the age group.

Just looking at this seems not to be enough to conclude that Kirby Dach will likely improve his faceoff prowess with age. To gain more insights into possible development paths, let’s take a concrete look at how other players with comparable awful seasons at a young age have developed.

In the table in part 1, we identified all players that had a season with at least 500 faceoffs and a faceoff win percentage of < 40%. Excluding all players over the age of 23 at the time (to keep things comparable to Kirby Dach’s situation), Johan Davidsson’s 1998 season (he only played two seasons total in the NHL) and Trevor Zegras’ and Dawson Mercer’s 2021 rookie season, we are left with the following 15 players that were in a similar situation to Dach: Patrik Berglund, Andrew Cogliano, Casey Mittelstadt, Tim Connolly, Evgeni Malkin, Jack Eichel, Jared McCann, Derek Stepan, Adrian Kempe, Filip Chytil, Ryan Nugent-Hopkins, Markus Granlund, Kevin Hayes, Jack Hughes and Oleg Kvasha.

The following graphs will show the development paths these players have taken in regard to their faceoff win percentage. These graphs will now also include seasons with less than 500 faceoffs taken. The size of the datapoints indicate the amount of faceoffs taken in that season.

The first two graphs show that 8 of the 15 players had a clear positive development in their faceoff win percentage. None of these develop into consistently strong (or even average) faceoff takers, but mostly settle into the "below average but passable" category of around 45%. 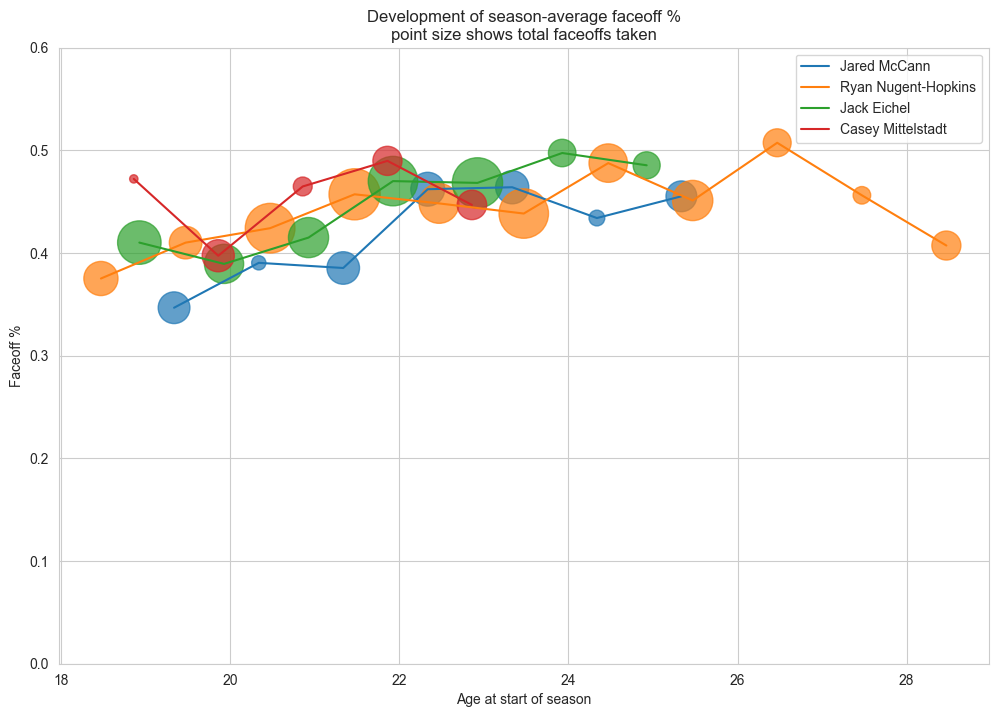 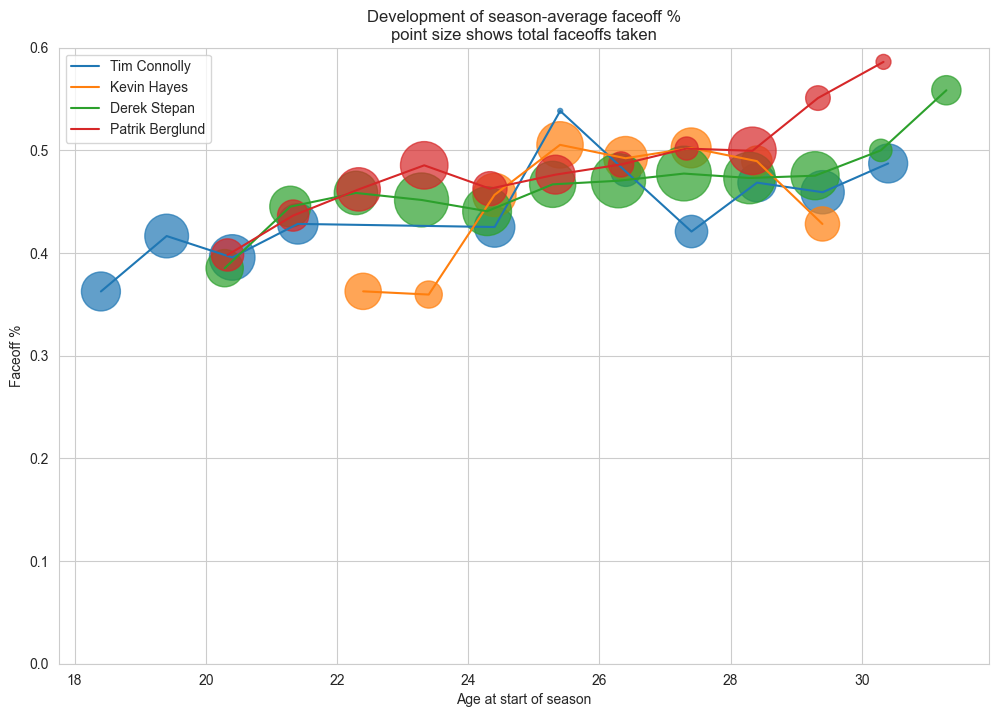 In contrast, three players (Cogliano, Kempe and Granlund) seem to be clear victims of the survivorship bias mentioned above. They did not improve enough and ended up not taking many faceoffs in the NHL in following seasons. I would assume this would be the worst-case scenario for Kirby Dach. 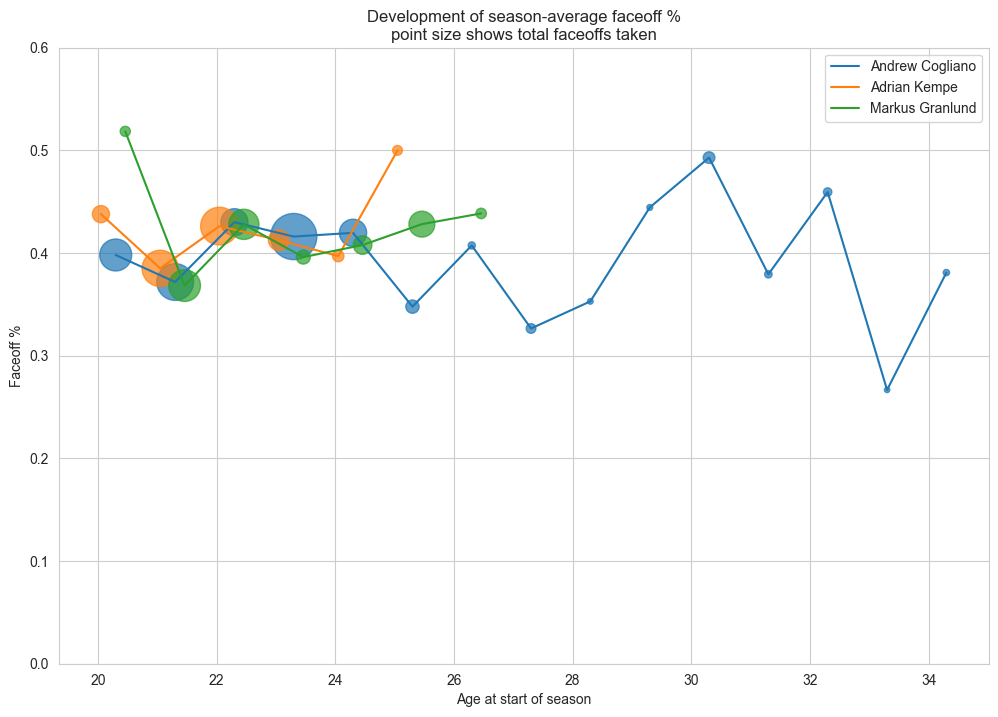 Two other players (Malkin and Kvasha) are more difficult to pin down, as their faceoff win percentages are all over the place. Especially Evgeni Malkin seems to alternate between passable and pretty bad phases on the faceoff dot. 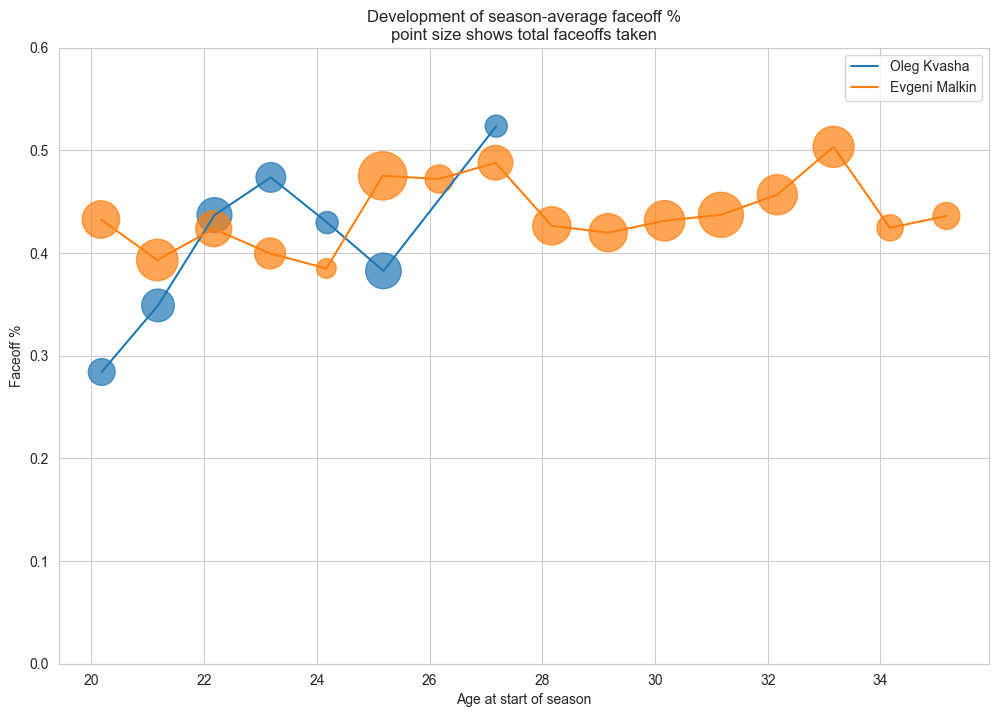 The last two players are Jack Hughes and Filip Chytil. Both are currently in the same situation as Dach: Young and very promising centres that currently struggle with winning faceoffs consistently. It might be my focus on the Canadiens, but I haven’t heard quite as much about Jack Hughes’ consistent faceoff struggles (well below 40% for each of his first three seasons) in comparison to Dach. 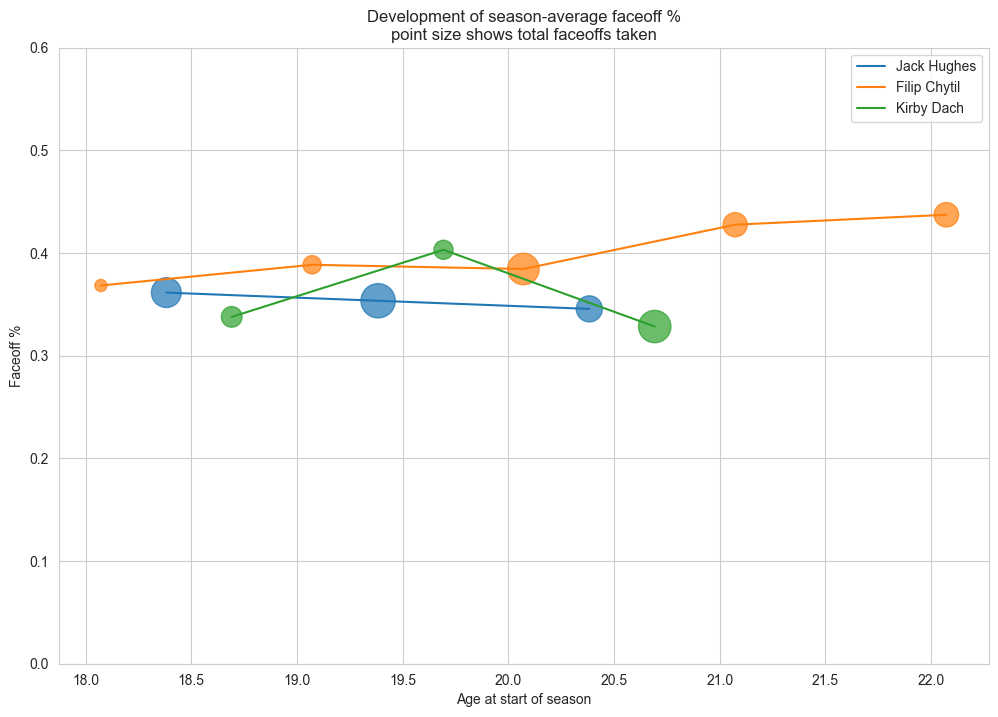 So, what do all these graphs and comparables now actually tell us about Kirby Dach? While some players remained inconsistent and a few lost their coaches trust to take faceoffs, most players with a very bad faceoff season before they turned 23 improved. None of them turned into Yannic Perreault, but most became good enough at taking faceoffs to remain effective (and in some cases outstanding) centremen. I believe this is what an optimistic but reasonable expectation for Kirby Dach could be: improve enough so that he gets by while his other attributes carry his value on the ice.

Of course, it is also completely possible that he does not significantly improve in this area and starts playing on the wing or is paired with wingers that can take his faceoffs. We have seen Martin St. Louis already utilize both of these strategies this season, with Dach’s faceoff win percentage currently under 40%.

What do you think? Will Dach improve or stagnate? Should he be sheltered right now or take as many faceoffs as possible in order to learn? I would love to hear from you in the comments.

Thank you to everyone who read this far! This is the first time I’ve ever written something like this for hockey, so leave me some feedback if you enjoyed it or if you have ideas what I could improve. Also leave a comment if you have any questions regarding the graphs, data etc. If you have any interesting ideas that could be explored with this historical data, hit me up as well!