From one end of the spectrum to the other: Rediscovering a love for the game

Spending years looking at multiple sporting events in their smallest details, it was a move to a more humanized approach to the game of hockey that made me a fan again.

Share All sharing options for: From one end of the spectrum to the other: Rediscovering a love for the game

I was standing outside the locker rooms in the arena of the Zurich Lions. I was about to speak to one of the most talked about ice hockey players in the world: Auston Matthews. I was thinking it would be a piece of cake to interview an 18-year-old kid.

This project started off with Jonathan Species writing a great article about how he had to adjust his hockey watching habits in his role at Pension Plan Puppets. Paul Wheeler followed up with his story at Stanley Cup of Chowder. They set me off thinking about my first year at Eyes on the Prize, and how that has changed my approach to watching the game.

I was sitting at work: a nice office in the western part of London, UK. I had every sport at my fingertips. If you asked me about a score in the Uzbeki football league, or who was serving in a women’s tennis ITF tournament in some obscure location, odds are I would have been able to answer it within 10 seconds, without resorting to a search engine.

My last big project for the sports betting company I was working at had been a success: the Commonwealth Games. I had been asked to "sort it out" after my handling of a previous project — the Winter Olympic Games in Sochi — had been a glorious success not only for me but for the company itself. I should have been happy and proud because of this, but the reason I was smiling and my heart was beating in my chest on this particular day was that I had just gotten an e-mail from the managing editor of Eyes on the Prize asking me to join the ranks.

Damn, I was proud. I had read their articles since 2010, taking my first step in posting comments some time in 2012. I had written in English for most of my University degree, and had lived and worked in London since 2006, but to actually gain the confidence to participate in the discussion took a while.

To then be approached to cover something weekly at EOTP ... what could I bring to the forums? These guys knew it all. On top of that, English is my third language, after Swedish and Norwegian, and I have a mild case of dyslexia (nothing major, but I fail to spot mistakes more often than not). Just to start commenting on articles was a huge step for me.

I was to be in charge of a new specialized project to cover the Montreal Canadiens prospects playing in European countries, and contribute what I could on top of that assignment.

I can do this. This is cool, I thought to myself. I remember asking about my spelling problem and was assured it was going to be okay, but the biggest concern I had was from another source.

The problem was that I had been working in sports for more than six years, albeit from a very different perspective. I was getting tired of working in sports day in and day out, so could I really let them bleed into my spare time, too? Could I go from what was a monitored game, inputting data into live-betting models and developing new bet offers to actually watching a game with the purpose of maybe focusing on just one player? Would I be able to make that change within a matter of minutes, or even do both at once if my work and blog lives overlapped for a specific hockey game?

The dream job that I held was killing my general sports interest. I was worried that taking another job in sports would kill the last bastion — ice hockey, and specifically the Canadiens — for me, too.

In the end, I accepted the role with EOTP. My top priority was to do something different than what I did professionally. I wanted to work with people. I wanted to talk to them, to understand the person behind the visor, because in my line of work I hadn’t been interacting with people for a long time.

At first, my new project was challenging. I knew no one; no one in Europe, and certainly no one in North America. I started from scratch with fewer than 30 Twitter followers and no connections. I had to see it as a strength that I wasn’t pigeon-holed. It would be a challenge, but it was something to be relished. 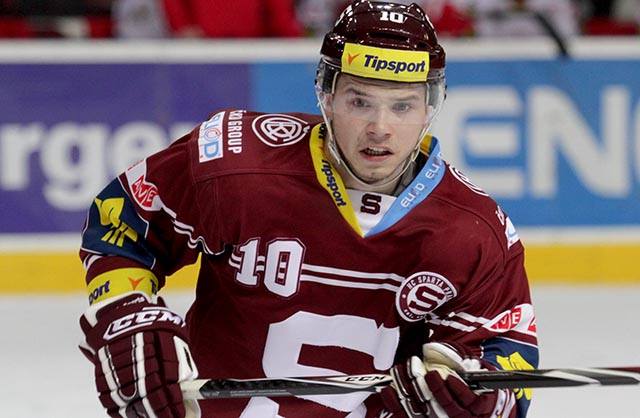 I lucked out from the start. Frölunda HC allowed access to Artturi Lehkonen, Djurgården to Lukas Vejdemo, and Sparta Prague gave us controlled access to Martin Réway. That gave me a base to stand on, other clubs took notice, and I slowly built up some sort of pedigree.

One change I noticed immediately was that the detachment I experienced while working in sports betting was replaced with a greater interest in analyzing the play of the prospects in our weekly updates. I swore when the camera pulled away so one of my targets — one of my players — wasn’t in the frame anymore. I was sitting on the edge of my seat following clubs I had never really bothered with before, in leagues for which I wouldn’t have been able to name more than two teams before the season began.

The main thing that changed was that I started to fall in love with the game again. Maybe not the same love as when I was a child, when every player on my favourite team was a star, but a love that was needed to start appreciating ice hockey again.

How do you evolve your craft? What is your next target? Those are the questions that run through my mind now. Whereas previously I was just working, now I am pushing my own boundaries. I learn as I go along. I challenge myself at least once a month in regards to my writing, and end up in places I never thought I’d be.

Zurich is of course one such place. A few days later I was in Bratislava, Slovakia, and I've been to different games in Sweden. I've received contact information for players and national associations. Everywhere it was the same; if you ask politely, you usually get some good answers and opportunities.

I think the main thing I learned was that if you source it correctly, no one really minds if you take a bit of an article to strengthen a point or in order to get a quote. That became clear when I asked some of the beat writers for help with a photo after Frölunda had claimed the SHL title, and the reply I got was "here is a picture, use it as you want, I know I can trust you."

Even if we as writers work for different media outlets, we also need each other in different ways during a season. The cooperative effort (at least that I have seen) has been something to aspire to be a part of; to belong in this place of exchanged information and ideas. Because if you belong and do something you love, you never want to quit.

As it got to my turn to get my five minutes with the projected number one pick in the 2016 NHL Entry Draft, I got speechless. I struggled to find my footing, and I managed some typical questions about the game, and got some typical answers from a very-well-media-trained Auston Matthews. I snuck in a few questions about the World Junior Hockey Championship that was going to start later that month, and in the end I think I was done in three minutes.

After I had finished my follow-up interview with Canadiens prospect Martin Réway (who had played for the opposing team), some of the Swiss media took me aside and offered me a beer, saying I had survived my trial by fire. It was camaraderie at its finest, and they told me their stories from similar experiences. Again, I come back to the support from the veterans.

Two days later, when I did an interview with KHL players Francis Paré and Louis Leblanc, I felt like I belonged, This was what it was all about. I still made mistakes, but I was with people talking about real things. Things that mattered. About the person behind the visor.

To me it brought me closer to the game, it brought me both forward and back to a time when I was sitting in front of the radio or TV, listening to the reporters making these players into persons.

This is what writing about ice hockey has done for me. I am more involved, and to tell the stories about the human side of the game became the most important thing for me.

By that extension, writing about it gave me back my love for hockey.