Eller didn't have a great year, nor did he have a bad one. But one thing is for certain, it's beyond time to use a little more nuance when evaluating players.

In the hockey world there seems to only be two ways of describing a player.

Either he's amazing, or he's terrible. This leads us to narratives that are set in black and white, without much room for nuance.

The truth is you need all types of players to build a successful team, and in reality there's several categories we're overlooking. A forward can be an offensive threat, but overpaid. A player can be useful, but offensively challenged. A defender can produce on the third pairing, but lack the skill set to play tougher minutes, etc.There are too many variables to paint every player in two shades.

Which brings us to Lars Eller.

What you'll see online is two viewpoints. Either he's useless offensively, or he's a possession monster.

The truth is somewhere in the middle. You won't get a 50-point season from the Danish forward, however saying he's useless is incredibly shortsighted. On the flip side of things, yes he does drive possession, however we do have to accept that his offensive upside is limited.

Essentially, Eller provides the Habs with solid minutes, but he'll probably never crack the 20-goal mark in the NHL, especially once we consider his usage.

You can expect him to score 10-15 goals per year, while providing versatility to the head coach. This year Eller was used as a left-wing, a center, and on the right side. He also spent time on 10 different line combinations, none of which lasted more than 135 minutes of ice time.

He maintained a positive Corsi For % throughout the majority of the year, which explains why he finished 6th on the team in that department, and fourth among all forwards, behind only Max Pacioretty, Brendan Gallagher, and Alex Galchenyuk. A remarkable feat considering he played a rather large portion of the season in a new position on the left wing, eventually shifting to center, and then to the opposite wing as well. He was put in a tough situation, and his possession metrics were overwhelmingly encouraging.

The main bump in the road when it comes to discussing Eller's value, is his lack of offensive production. 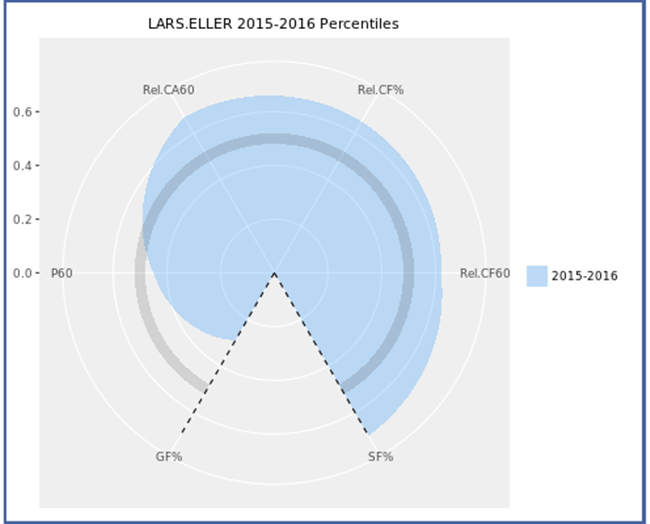 And it's true, he's not extremely gifted in the offensive zone, however you have to consider that he's never had the opportunity to play in the top six for an extended period, which definitely mitigates his production. He finished 10th on the Habs in terms of points per 60, which is underwhelming, although he did manage to place 7th in scoring among regularly used forwards this season.

Should we expect more? No, not really.

Despite his timid production, we have to keep in mind Eller received the 9th highest average ice time for forwards, which goes a long way in explaining his lack of scoring.

There's something to be said about players that fulfill a certain role within the team, and when it comes to Eller you have recognize that his versatility, penalty killing prowess, and possession driving ability.

He's paid handsomely for his responsibilities as well, so you don't need to feel sorry for Eller, but if you're expecting a forward that constantly receives third-line minutes to produce as a top-six player, you need to readjust your expectations towards a more realistic result.

Eller will probably never become an elite NHL player, but the fact of the matter remains that he helps his team win, and in the long run that's the most important thing a player can bring to the table.