There's no doubt about it, Subban is still one the best defensemen in the league.

It was another good season for P.K. Subban, as is tradition.

He started the year on a tear, along with the rest of the team, putting up 0.90 points per game over his first 20 games. As November started to dig in, his production dropped to 0.70 points per game, until he started to heat up again around the beginning of January. He ended on a run of 24 points in the final 20 games of his season before he was injured in his 68th game. 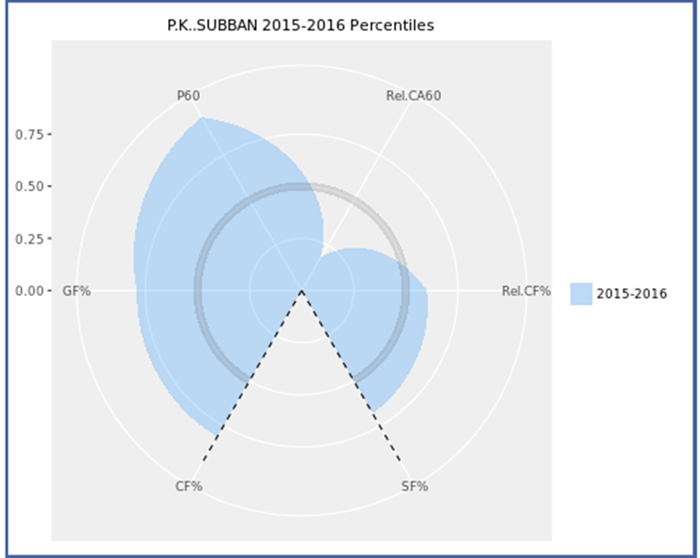 When he was not at his best, neither was the rest of the team. During that stretch of the season between the end of November and mid January where Subban was 0.70 points per game, the Habs had a record of 7-12-1, including a six game losing streak.

It would be around this point in the season that his lack of goal production would become a factor, with only one goal his first 44 games, and finishing the season with the lowest goal total of his career with six. He had a 4% even-strength shooting percentage, half that of his 2014-15 results.

Subban started all but eight games alongside Andrei Markov, with the pair putting up a combined Corsi For of 51.9%. The only other partner he saw heavy action with this season was Nathan Beaulieu, with the pairing combining for an excellent 56% CF. Overall, Subban was a positive possession (52.1% CF) player, while facing the highest quality players from the opposition.

It's not a surprise that Subban was the most used player on the team, with 26:22 in average ice time for the season, good for fifth in the league. He was on the ice for 100 of the Canadiens' 181 goals up until his injury on March 10 that saw his ironman streak of of 434 straight regular season games (489 including playoffs) come to an end.

Subban's obvious importance to the organization is not only glaringly apparent in the numbers he puts up, but also in his leadership on and off the ice, highlighted by the $10M donation he made at the beginning the season to the Montreal Children's Hospital.

It seemed as though he was dedicated to being the best human possible last season, and amid controversy proved time and time again who he was in the face of undue criticism of his character.

A rocky relationship with Michel Therrien was probably on display more than ever last season. This rose to the surface more than once, including after a loss to Colorado in mid-February, where he gave up the puck in the final two minutes of the game on a play where he lost his edge. The play garnered a description of selfish from the coach, who did not play his star defenceman in the final minute of the game despite the Canadiens' still being in the playoff race at the time.

It wasn't  Subban's best season of his career, but given the weight on his shoulders as a leader of a struggling team, he dutifully fulfilled his role. Whenever he was marred in controversy he never asked for, he masterfully diffused the situation. His skills as a player and qualities as a person set him apart, and do often seem to shine brighter than the rest of his team, but that is not something to fear or try to contain.

To add to the contrived drama surrounding his star player, Marc Bergevin made waves at his end of season press conference by stating that any player can get traded. With a no-trade clause kicking in on Subban's contract as of July 1, there is a small window of time to attract offers and gauge his value to other teams.

While a trade is unlikely, the fact the Bergevin did not outright deny he would trade his best skater made for troubling news to some fans, only further underscoring Subban's importance to the fan base.

One thing that was proven without a doubt this season is that it's impossible to make use empty rhetoric and baseless rumours to break Subban. He's too solid for those low level shenanigans.

He will always do his job, answer questions, take criticism in the best way possible, and make an impact with a big smile on his face.

He can't be broken. Oh, and he's dominant on the ice as well. What more could you ask for?