Dale Weise is only worth bringing back under ideal circumstances

Dale Weise wants to come back to the Montreal Canadiens, but it may not be in the team's best interest

Share All sharing options for: Dale Weise is only worth bringing back under ideal circumstances

If you were to tell Chicago Blackhawks, New York Rangers, or Vancouver Canucks fans that Dale Weise is, other than Carey Price, the Montreal Canadiens player with the most clutch playoff moments over the last three years, they'd probably laugh in your face.

The fact is, Dale Weise is a bottom-six player who has a penchant for coming up with huge goals and antics that increase his perceived value. And as an unrestricted free-agent, that's a dangerous combination for teams.

For every chest bump, there's a turnover. For every break he gets on a chip off the glass, there's a time he leaves the defensive zone too early.

It was a year ago yesterday that Weise scored the tying goal in the third period and the winning goal in overtime in game three of the Atlantic Division semi-final. It's one of those games that skews your perception of what he really is.

There is no denying that Weise can provide great value at $1.5 million per year. However, there are some caveats to that. The odds he gets $1.5 million on the open market are slim. And, if he comes back to Montreal, his best value is in the bottom six. It is not taking a top-six role and power play time.

If Weise takes away NHL playing time from Daniel Carr or Sven Andrighetto (which he has) or power play time from Alex Galchenyuk and Lars Eller (which he has), it eliminates all of the positive value he brings.

For all of Weise's heroics and him exceeding even the highest of expectations when he was acquired for Raphael Diaz, he's a pretty average third or fourth line player using luck and increased ice time to put up points. But even in his best season, the comparable players are not kind to Weise.

Weise had 14 goals this year, a lot of them came from playing in the top six. He will not get those numbers if he stays in a bottom six role where he has his most value. Once he traded to Chicago he struggled to stay in the lineup and has played only one of the four playoff games to date.

His best stretch was with David Desharnais and Tomas Fleischmann on the Canadiens third line to open the season. But that was based on smoke and mirrors and unsustainable percentages, a trend that goes with his entire time in Montreal. The line was producing, no doubt, but they were also scoring on half their chances, which explains why the production rate didn't last. 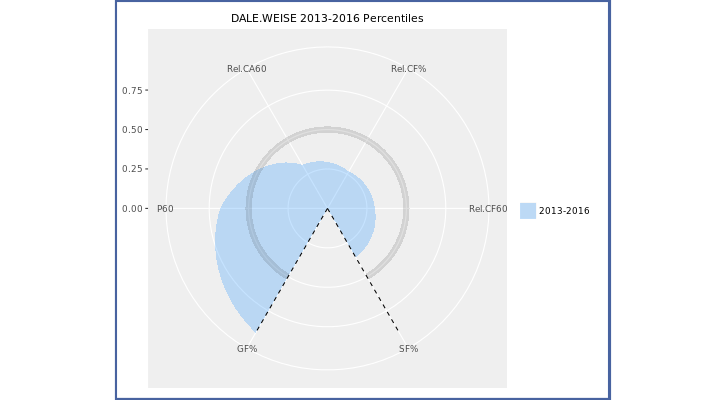 It's not a surprise that Weise wants to come back to Montreal. It's where he's had his most success on the ice. He obviously has a lot of friends in the room and enjoyed his time here. But how much he wants to come back (meaning how much of a discount he's willing to take) will ultimately decide whether it would be the right move.

Montreal has a ton of bottom six players. Paying anything close to $2 million for another one in a cap world is counter productive. Marc Bergevin needs to be spending money on getting top six forwards.

I would want Weise to come back as much as he wants to come back. However, it would only be a positive move under the right circumstances and those circumstances don't mesh well with an upcoming unrestricted free agent coming off a career year.