Acquired on the waiver wire, the speedy fourth liner ended up being a highly useful tool for Michel Therrien this past season

When the Calgary Flames opted to place Paul Byron on waivers back in October of 2015, it provided Marc Bergevin and the Canadiens an opportunity to add some low-risk depth to their lineup. While he spent his first few games with the club watching from the press box, he eventually joined the lineup and provided great value in the bottom-six.

When he broke into the lineup, he was placed on a line with Torrey Mitchell and Brian Flynn. That trio was a constant threat, in addition to handling their fair share of defensive duties. This was no more apparent than at the Winter Classic against the Boston Bruins, when the Canadiens fourth line feasted on the Bruins, and Byron collected a pair of goals in the 5-1 rout.

Perhaps Byron's biggest contribution came on the penalty kill, where he was a threat to break out shorthanded and create scoring chances for himself or his linemates. Used heavily in these situations, he put up five points on the year, and was a constant threat to score if the opposition didn't properly cover him.

Over the course of the 62 games he played, Byron posted a 49.22% Corsi For in nearly 700 minutes of ice time. He was one of the few Montreal players fortunate enough to mostly avoid the injury woes, and as a result he was relied upon much more heavily than he typically would be.

You can see in the chart above exactly where Byron returned from injury in February and was thrust into a much larger role, which hampered his overall effectiveness. However, he still managed to be an effective shot suppressing forward for Michel Therrien overall this year.

This was reflected in his Corsi QoC (Quality of Competition) which clocked in at 50.4% for the year, the highest he's ever experienced in the NHL. It's not the highest by a huge margin, but it illustrates how he was relied upon more and more by his club as the injuries kept piling up. Towards the end of the year, he saw time on the wing of Tomas Plekanec, who typically handles some of the toughest assignments against opposing teams. 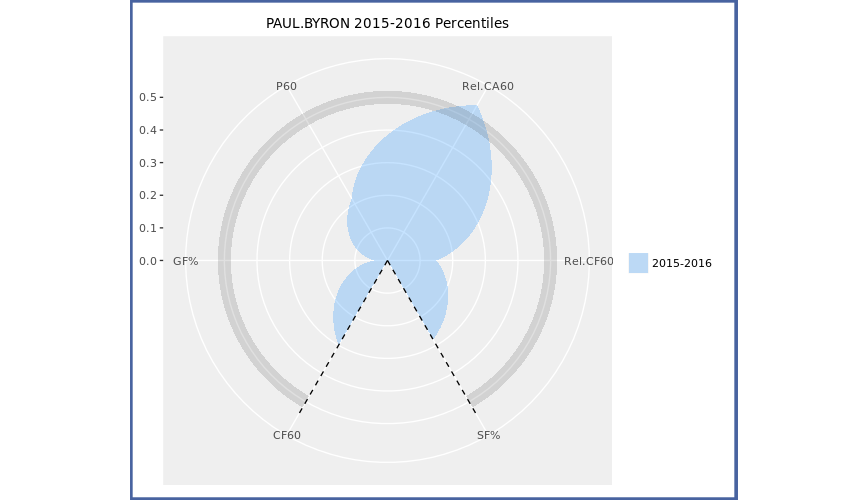 Despite not generating that many shot attempts at opposing nets, Byron ranks above the NHL average at preventing them on his own net at even strength. It's apparent going forward that the speedy forward will continue to feature prominently in the Canadiens penalty kill, as those shot suppressing abilities lessen the workload on his goalies.

He inked a new three year deal with Montreal in February, and with an AAV of 1,166,666, it is a cap friendly deal for a player who can anchor the fourth line. Providing the Canadiens don't suffer the same horrible luck on the injury front next season, Byron should be able to face softer competition, and thus his numbers would stand to improve.

For a waiver wire pick up, Paul Byron ended up being one of Marc Bergevin's best moves as GM of the Canadiens. Acquiring a fourth line player who chipped in 10+ goals and can effectively kill penalties should be considered a steal, if not outright robbery.