The big-bodied left winger was acquired in a trade with the Devils on deadline day and struggled to become a regular in the Habs lineup. Devante Smith-Pelly was shipped to New Jersey in the deal and scored eight goals and five assists in 18 games. So far the trade looks like a bust for Montreal.

Stefan Matteau has what should be a good pedigree for the NHL. He grew up in hockey and was part of Team USA's development program, having won a silver medal with the U17 team in 2011.

He has decent foot speed despite his highly-coveted size, at 6'2" and 220 lbs. He uses his body along the boards to create turnovers, and has a reputation for taking too many penalties; he was the U18 USA player with the most penalties in 2011/12 - the same achievement earned by Michael McCarron the following year.

Since being traded on February 29th, Matteau played in 12 of the Canadiens' 19 games and picked up a solitary assist. He was used as a defensive forward by Michel Therrien, starting 58.2% of his shifts in the defensive zone. His size was likely a contributing factor to his deployments, though it must be said his possession numbers are not pretty.

His Corsi For percentage has always been on the wrong side of average, and his 12 game stretch in Montreal was his worst yet, clocking in at 43.7%. He racked up a -8 differential of high-danger scoring chances in his dozen games, which is a total more attributable to a player with nearly three times as many games. The only forward with more than 10 games played who had a worse rate of high-danger scoring chances per 60 minutes was Jacob de la Rose.

Between the Devils and Habs this year, Matteau played a career-high 32 games, but failed to see his average ice time climb much past the ten minute mark. He is in his third season since being drafted and has yet to prove he can be a regular NHL player. He is 22, lacks the scoring finish to play his way into the top nine, and can struggle in defensive assignments. His cheap contract ($650k next year before becoming an RFA) is attractive, but his skill set probably doesn't justify a roster spot on an NHL team.

Despite such limited playing time, Matteau found himself on no less than 37 line combinations in his 12 games as a Habs forward. His most regular linemate was Michael McCarron, and he saw a rotation largely featuring Phillip Danault, Lucas Lessio and Mike Brown. Danault and Lessio both show promising signs of being able to routinely contribute as depth players and their auditions went much better than Matteau's.

Being the offspring of an NHL player doesn't always translate to being able to duplicate the feats of the previous generation. Matteau's father Stéphane played in part of 13 seasons with six teams, winning two QMJHL championships and a Stanley Cup with the 1994 New York Rangers. Even his sister Alyson is part of Team Canada's women's hockey program having won a silver medal at the women's World Juniors in 2015. 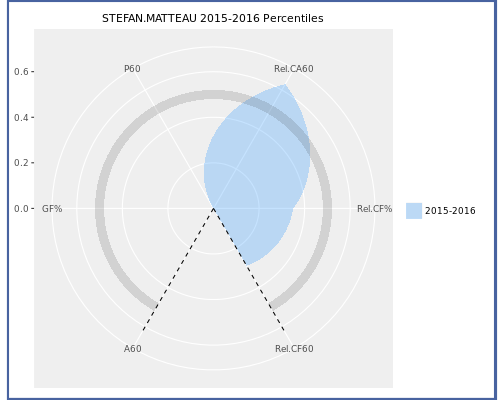 A quick peek at the Habs' depth chart should tell you that Matteau should be playing in the AHL next year. He's not one of the top four left-wingers, and any of the team's six centers are better players; all of them save Galchenyuk and Plekanec can easily play the wing. Charles Hudon should see more time with the Canadiens next year, and is yet another player with a more complete and useful tool kit than Matteau.

Devante Smith-Pelly had a great stretch of games in New Jersey, which was more than the Devils had gotten from Matteau, but time will tell if that lasts. DSP's performance in Montreal wasn't noteworthy, it will be interesting to see just how he plays next year. He probably won't keep his pace up the way he finished the year, but Matteau on the other hand has simply been a negative impact player since joining the Canadiens.

Surprisingly, Marc Bergevin has indicated that as far back as his days in the Blackhawks organisation he has been a fan of Matteau. While I'm still hopeful that Matteau can develop into an above replacement-level player, I won't hold my breath.