The 22 year-old winger was used on all four lines, was a healthy scratch, was bounced up and down between Montreal and St. John's, and still had himself a decent season.

Sven Andrighetto had a season of ups and downs, being juggled between the St. John's IceCaps and the Montreal Canadiens, ultimately finding his stride on the depleted Habs' top six. His speed, creativity, and positioning stood out as his main strengths with the Habs.

Andrighetto began the season with the IceCaps, where he scored an impressive 0.88 points per game, good for 31st among all AHL players. This places him just above his teammate Daniel Carr at the AHL level, though that wasn't the case in the big league.

After a brief call-up in November, during which he was relatively productive, Andrighetto was sent back down to the AHL in January, only to be recalled again a couple of weeks later. He since has spent time on all four offensive lines, never staying too long with the same two linemates.

Performing an eye test and taking a look at the underlying advanced statistics reveal a much more interesting potential in Andrighetto.

He averaged a mere 13:07 of ice time and started the majority of shifts in the offensive zone. Despite the small sample size and scarce deployment, he appears to have a positive impact on possession, having played in six different combinations of forwards, all having a positive Corsi For % when he was on the ice.

Six of his first seven points with the Canadiens this year were goals, as he established himself as the kind of player a team can count on for secondary scoring.

The 22 year-old winger got a boost to his point totals late in the season, thanks to some injuries to key players and a lack of depth on the right wing. Eight of his season points came in March, when his ice time was on average about five minutes higher than it had been earlier in the season. Essentially he took advantage of every extra minute he was given.

His late-season push of 11 points since February 12th was made up of mostly assists, but this also coincided with his being paired with Max Pacioretty and Alex Galchenyuk, so this shift isn't unexpected. If anything it shows he has the ability to beat NHL goaltenders with his shot as well as to set up his teammates.

He finished the season with 1.53 points per 60 minutes, good for eighth among Habs' forwards (with more than 100 minutes played). His goals and assists per 60 were seventh best in the club, and most comparable to players like Lars Eller and David Desharnais.

Andrighetto's most common linemates were Eller and Alex Galchenyuk, with whom he spent over a third of his time and collected 36% of his points. Overall, he had a 53 CF%, although it has to be said he wasn't producing  a lot of shots. To his credit, he was all over the lineup at both the NHL and AHL levels, never finding a permanent home with any two forwards. If he plays a full season in Montreal next year he may shoot and score with more regularity.

His usage this year was detrimental to his ability to fully showcase his skills, and was a prime example of Therrien's patented blender style of shuffling players throughout the roster; he was sent down to the AHL when he was the team's 6th best shooter in five-on-five situations (G/60), and was even was demoted from the first to the third line in a game where he picked up two points.

When Andrighetto was recalled to the Canadiens in February, he spent time on all four lines, was a healthy scratch in the press box and spent a few games on the injured reserve. Despite his speed and offensive skill, he seemed unable to gain any favour with his coach, who saw fit to promote players like Paul Byron and Torrey Mitchell over the young prospect.

The more minutes he played, and the better his linemates, the more Andrighetto appeared comfortable on the ice. The March 29h game against the Detroit Red Wings jumps to mind, when Andrighetto was constantly being found open by teammates, and in return found them with crisp passes. He found open ice without the puck and let his hockey IQ shine through that entire match. He was, however, demoted off the first line in favor of Paul Byron during that game, but still collected a goal and an assist, his third game with multiple points this season.

What did this year teach us about Sven Andrighetto? He looks like a third line player with the ability to replace a top-six forward when injuries occur.

His potential as an offensive player is not clearly defined, though he has many of the right tools. However, like most younger players, he struggled against premier shut-down defenders across the league when he was on the first line. He backchecks hard and has positive possession numbers, but doesn't play an aggressive, physical style, which Therrien tends to favour.

The Habs will try to land at least one genuine top-six forward this summer, and have a nice complement of shut-down wingers. In all likelihood, Andrighetto will be competing for a spot in the lineup with Daniel Carr, who is more consistent offensively and plays an aggressive net-front game like Brendan Gallagher.

Paul Byron was shown more confidence by the coach down the stretch this season, although you'd be hard pressed to argue that he has a superior skill set compared to Andrighetto. 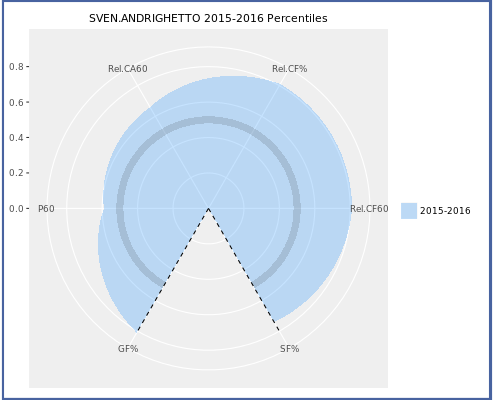 Whoever plays on the wing between David Desharnais and Lars Eller (should they both return) will also push Andrighetto down the depth chart. This doesn't even take into consideration a player like Charles Hudon, who appears poised and ready to break into the NHL, and could also be fighting Andrighetto for a spot in the Habs' lineup.

With so much competition for a spot on the roster next year, Marc Bergevin could elect to add Andrighetto to a trade package. He is an RFA this summer, and could be re-signed for cheap but he also could easily be flipped while his value is on the rise. I really like what I see from him so far, but if Andrighetto can be shipped out along with other pieces that bring back a top-six scoring winger as a return, it would make sense for the Habs.

It was a generally positive season for the former third-round draft pick, who showed improved scoring, passing and smarts despite being juggled between St. John's and Montreal, as well as up and down the depth chart. He never looked completely out of place throughout all the movement. He's the Canadiens' own littlest hobo.

"Every stop I make, I make a new friend,
Can't stay for long, just turn around and I'm gone again