It was a frustrating season for Tom Gilbert. Following his absence for the entire month of January, Gilbert returned to action on February 2, but he wouldn't make it to the end of the month. He left the game versus the Flyers with a lower-body injury, and shortly thereafter it was announced that his season was over, as he underwent surgery on his knee.

He started the season alongside Nathan Beaulieu, and the two performed way below average whereas the rest of the team was running on high octane. Beaulieu and Gilbert combined for a woeful 45.99 Corsi For % in almost 300 minutes. 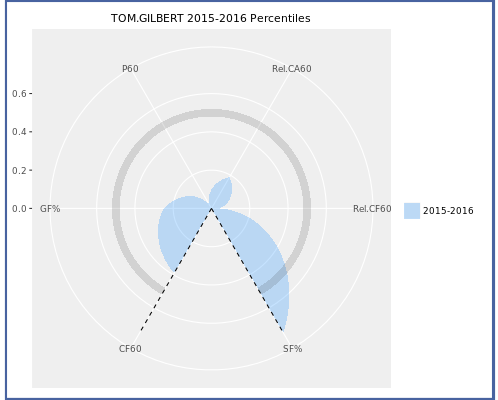 In mid-November Gilbert was paired with Greg Pateryn, and the pairing provided excellent numbers, cracking the 60 CF% mark. Second-pairing duties with Alexei Emelin were next on the docket, followed by ice time with Mark Barberio for a few games before Gilbert succumbed to injury. In the second half of the year he performed about at, or slightly below average.

Once all the dust had settled, Gilbert ended the season with the lowest overall CF% among regular defenders, with 49.84%. He only managed one even-strength point, a goal, even if he benefited from the second-most offensive zone starts among his peers. Gilbert wasn't a high event player, in that the only defender that enjoyed fewer Corsi events while he was on the ice was Greg Pateryn. Additionally, the Habs only created 51.42 shot attempts per 60 when Gilbert was present, which wouldn't be an issue if they allowed fewer shot attempts against, but that wasn't the case (53.21).

He ended up with a relatively low quality of teammates throughout the year, but that was offset by him facing a lowest quality of competition among all defenders.

Interestingly, despite being on the ice for less than 50% of the shot attempts, he managed to control over 52% of the shots that hit the net, ranking just behind Jeff Petry on the Habs.

Defenders over the age of 30 are always risky in today's NHL, and in Gilbert's case he seems to have hit the 30+ cliff in a hurry. His offensive production has more or less dried up since he joined the Habs, going from 0.4 points per game to 0.1 points per game.

Despite providing the team with reasonable play throughout the duration of his contract, it's becoming clear that he's no longer in a position to help the Habs win.

With Greg Pateryn and Mark Barberio hungry for more ice time, and P.K. Subban, Andrei Markov, Jeff Petry, Nathan Beaulieu, and Alexei Emelin assured a spot on the blue line, there doesn't seem to be any space left among the Canadiens defenders for Gilbert.

Of course, as we saw this season, there's no limit to how much defensive depth you can have in the organization, but there will be cheaper and more efficient options on the market if the Habs can't fill Gilbert's minutes internally. He's not a bad player, but given his age, lack of offence, and recent health issues, it's easy to project the Habs steering clear of contract renewal negotiations.

While Gilbert's time with the Habs may be at an end, we'll always remember his Bobby Orr-esque highlight goal.