His stint with the Habs was brief, but Fleischmann was an important part of the franchise-best start to the season.

Tomas Fleischmann's time with the Montreal Canadiens began with an audition during training camp after signing a professional tryout contract. After impressing with his speed and playmaking in the pre-season, he was signed to a one-year deal just before the season began.

He started the year playing opposite Dale Weise on David Desharnais' left wing, and the trio thrived in the opening months of the season. Capitalizing on a high percentage of scoring chances created, Fleischmann scored seven goals and added eight assists before the end of November, prompting an analysis of the players offering the best value to their teams, in which his $750 000 deal ranked among the very top.

In his short career with Montreal, he was one of the best offensive players on the team, ranking sixth among skaters with at least 500 minutes played at five-on-five in goals per 60 minutes, and eighth in points per 60.

The production dried up for the line after the hot start, and offensive struggles throughout the rest of the lineup began to be exposed. The Canadiens' free-fall from the top position in the NHL was underway. 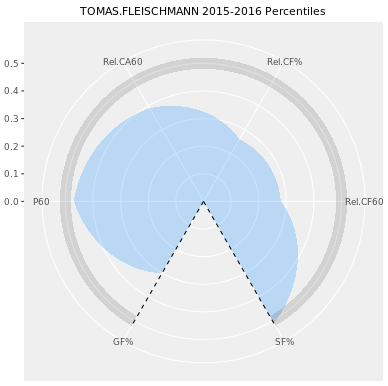 The lack of production quickly brought his deficiencies to the surface, most notably his scoring chance differential. He ranked in the top five for scoring chances allowed, and, unlike P.K. Subban and Alex Galchenyuk who also found themselves in that group, he wasn't helping to generate enough chances to compensate. A sky-high PDO in the first part of the year fell back to the average, and revealed Fleischmann to be a player in need of some sheltering.

In an attempt to right the ship, Michel Therrien broke up Desharnais' line and tried Fleischmann with steady two-way performer Tomas Plekanec, but kept coming back to the original trio hoping they would regain the scoring touch they had enjoyed.

When it became clear that the magic had ceased, Therrien banked on a duo that had been a key contributor to what was one of the best penalty-killing teams in the first part of the season, placing Fleischmann alongside Lars Eller. Starting just one third of their five-on-five shifts in the offensive zone, the new line had great possession numbers (with a Corsi-for percentage of 57.1%), but couldn't find the net.

On February 26, just days before the trade deadline, Fleischmann was packaged with Weise and sent to the Chicago Blackhawks in exchange for Phillip Danault and a draft pick.

His 20 points ranked him 10th in scoring on the team — eighth among forwards — so if the the plan was to bring in a third-line winger to add some depth scoring, the Canadiens succeeded.

The issue with Fleischmann, though it's not something he can be blamed for, is that he was given the third-most ice-time among all forwards in the first half of the season; more than all forwards other than Max Pacioretty and Plekanec, including Galchenyuk and Brendan Gallagher.

While he was a value addition to the team, his signing wasn't paired with the removal of one of the existing bottom-six players already on the roster, meaning that he occupied one of the slots that could have been used to transition a young prospect to the NHL level.

Many assumed that his contract would be followed by a player like Brian Flynn or Devante Smith-Pelly being placed on waivers. Instead, the Canadiens' opening-night lineup featured all three of those options.

At the end of the season, even with that unsustainable pace from the beginning of the year factored in, Sven Andrighetto and Daniel Carr both proved to be better offensive options in terms of points per game. You wonder where the Canadiens could have ended up if their roster had been constructed with more of an offensive orientation from the beginning.