Torrey Mitchell set a career high in goals, and even played in the top six for a few games, but otherwise it was business as usual for the reliable fourth liner.

It was an interesting year for Torrey Mitchell. In the 2014-15 review, he was reasonably projected to hit 10-15 points, which given his roll and deployment, would have been perfectly acceptable.

Instead, Mitchell scored 11 goals (three of which were game winners), and picked up eight assists, all while playing heavy defensive minutes with Brian Flynn, and Devante Smith-Pelly or Paul Byron.

Mitchell started off the season on one of the best fourth lines in the NHL, where he, and some combination of Brian Flynn, Smith-Pelly and Byron were fast, adequate in their own end, and even chipped in a decent amount of points - including a number of shorties.

From the start of the season to mid November, Mitchell collected five goals and five assists, two of which were on Byron shorthanded beauties, before doing his time on the IR with a lower body injury. Mitchell missed eleven games altogether, and came back just in time for the abysmal December skid, during which he was as stone cold as the rest of the team.

During the months before and after the trade deadline, Mitchell played with a revolving cast of linemates, including (but not limited to) Dale Weise, Phillip Danault, Jacob de la Rose, Stefan Matteau, Michael McCarron, and Lucas Lessio, even playing wing for a few games with McCarron or Danault as his centre.

Then, due to the utter devastation of the Habs roster, he would wrap up the season playing second line winger for Lars Eller and Tomas Plekanec. Together, they scored five goals and allowed one--though only one of those goals for belonged to Mitchell.

Re-signed, as he was, to be an upgrade on Manny Malhotra, Mitchell certainly delivered. While his faceoff totals may not have been as sterling (though still perfectly acceptable at 51.6%), he was significantly better in nearly every other aspect of the game.

Overall, given the Habs' 82% success rate on the penalty kill, the fact that Plekanec, Pacioretty, Eller and Byron are all accomplished penalty killers in their own right, and that the Habs were 20th in the NHL in penalty minutes, it really isn't that bad. In fact, given how wretched the Habs' powerplay was, maybe it's not such a bad thing Mitchell took more penalties than he drew!

Joking aside, though, in the other aspects of his game, Mitchell's contributions were quite good. Averaging 12:41 a game, and seeing a crushing 21.86% of his zone starts in the offensive zone at even strength, he still managed an ES CF of 48.3% overall, which, while not stellar, certainly isn't terrible, especially considering his linemates and his zone starts.

However, as you can see in the chart above, although his possession numbers averaged out to an acceptable number for his deployment, the second half of the season was pretty rough. 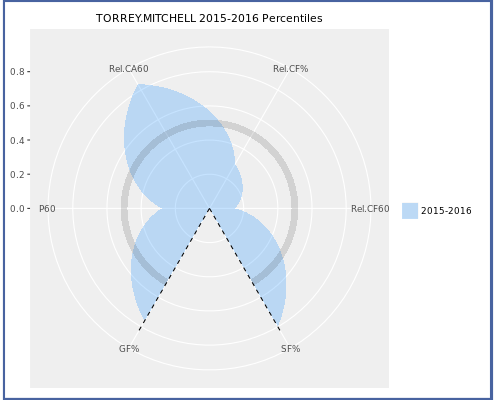 Production wise, at evens, Mitchell had 1.1 points per sixty, which actually had him ahead of players like Nazem Kadri (who, admittedly, was obscenely snakebitten to start the year) and Henrik Zetterberg. As his shooting percentage was a hefty 15.9%, it is unlikely that he will score quite as much in the future, but on a goal starved offence, his contributions, and those of his linemates, were much appreciated this season.

It will be very interesting to see where Mitchell falls in the Habs' plans going forward, given the log jam at centre, what with Galchenyuk hopefully claiming his rightful spot on the first line for good, leaving Plekanec, Eller, Desharnais and Mitchell (not to mention any prospect who should have the wild good fortune to beat the odds and make the team out of camp) left to jostle for the remaining three spots.

Mitchell is under contract for next year and the year after at 1.2 million which is reasonable for what he brings to the table. Moreover, he has proved to be a reasonably versatile player, playing wing and centre up and down the roster as injuries dictated.

While it may be wise to not expect quite as many goals next season, if the Habs chose to keep him, he should continue to perform in other areas like a high level fourth liner, or even a low-end third liner across the board, which is just about (if not rather better than) was expected of him.