Of the 15 defencemen used this season by Montreal Canadiens coach Michel Therrien, Victor Bartley was the only one who joined the organization during the season.

He arrived as part of the confusing three-way trade that sent Jarred Tinordi to the Arizona Coyotes for Bartley, who had just arrived from Nashville in return of Stefan Elliott and John Scott.

To say the reaction to the trade was underwhelming would be an understatement. Bartley had been a healthy scratch for the Predators all season long, much like Tinordi, before eventually clearing waivers and being assigned to the Milwaukee Admirals while he awaited a trade.

What Montreal got in Bartley was a depth left-handed defenceman, a position that needed strengthening. Bartley came with a lower cap hit than Tinordi, and will be an unrestricted free agent at the end of the year.

Initially Victor Bartley was assigned to the St. John's IceCaps so that he could learn the Habs system on the farm, while the Canadiens continued to evaluate Greg Pateryn and Mark Barberio.

Bartley managed to get an assist in his first game with the Habs farm team, but unfortunately suffered an injury that would keep him out of the lineup for the next five games.

On the IceCaps he played on the first defensive pairing for 5-on-5 play with Morgan Ellis, as well as first unit power play, and first unit penalty kill.

He would receive over 20 minutes of ice time per a game, and played a total of ten games with the IceCaps, scoring a goal and two assists, which coincided with the team's only three-game win streak of the season.

He was called up to the Montreal Canadiens on February 23rd when Tom Gilbert suffered a season-ending knee injury where he played roughly 15-20 shifts per game under coach Michel Therrien, paired most often with Mark Barberio. 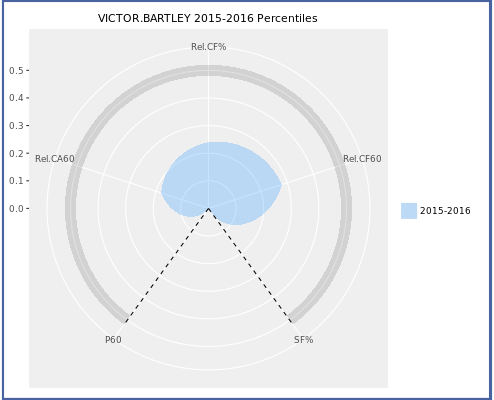 On March 19th Bartley suffered a season-ending knee injury, which ended up limiting him to only nine games played with the Habs. During those nine games however, some rather unflattering statistics began to emerge.

His presence did have a dramatic impact on GA/60, as the number drops from 3.50 to 2.05 when he was on the ice. However that's not unusual for a third pair defenceman.

Digging deeper into the analytics, it becomes obvious that Bartley played some very protected minutes, with the lowest quality of competition (QoC) along with his defensive partner Barberio (-0.114 and -0.137, respectively). This is to be expected from a third line pairing.

However the Corsi Relative statistic could not be any more opposite for the two. The numbers showed that Bartley actively hurt the team with his presence on the ice (a whopping -13.8), while Barberio was one of the strongest in this category (+8.6). The variance with Barberio can be explained by the fact that he spent significant time playing away from Bartley (primarily Emelin and Markov), and therefore his number is the more impressive that the QoC would have been higher with those on-ice partners.

This season was unquestionably unique season filled with injuries on the blue line, which offered Bartley the opportunity to return to the NHL. His short stint provided little evidence that the Canadiens should re-sign the pending unrestricted free agent.

At best he will return as a depth defender for the IceCaps, and provide a cheap option in case the Habs had to once again dig really deep into the depth chart for players.