#2 Meghan Agosta-Marciano: She played her NCAA hockey at Mercyhurst College, before joining the Montreal Stars (now les Canadiennes) in 2011. In just two CWHL seasons, she scored 57 goals, adding 69 helpers for a total of 126 points in 50 games. Oh, she also happens to be a three-time Olympic gold medalist (Turin, Vancouver & Sochi). In 2014, she took a break from hockey to pursue a career in law enforcement. She graduated from the Vancouver Police Department Academy in May of 2015. 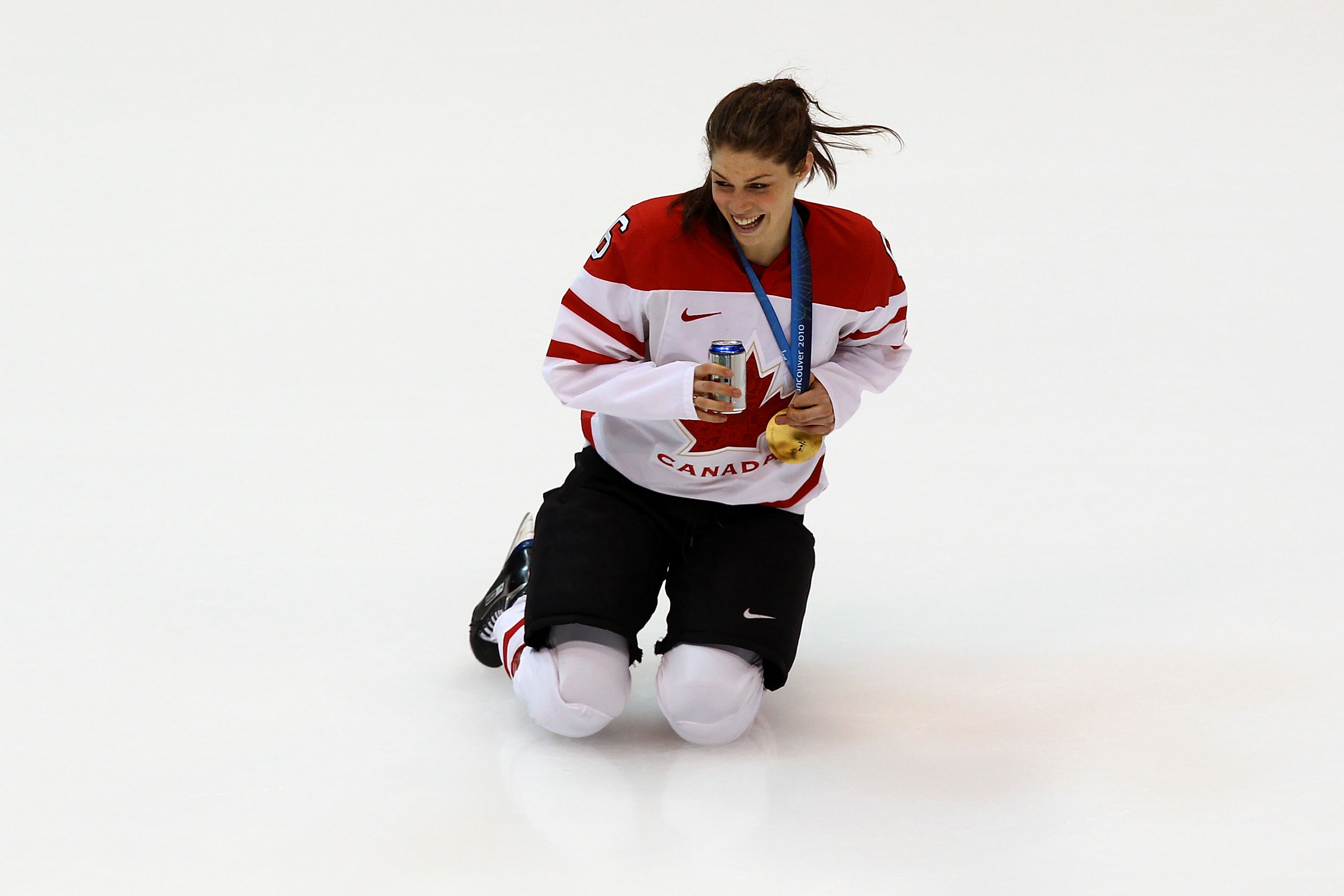 #6 Rebecca Johnston: Played NCAA at Cornell University before starting her CWHL career in 2012. She spent her first season with the Toronto Furies, before moving on to the Calgary Inferno last year, where she clinched the Angela James Bowl as the league's leading scorer. She saw minimal playing time in the CWHL this season due to an injury, but rejoined the Inferno in time to help the team to their first ever Clarkson Cup championship. Johnston was a member of the Olympic gold-medal winning squads in both 2010 and 2014.

#7 Jamie Lee Rattray: The Brampton Thunder forward won gold at the 2010 IIHF World Women's U-18 Championship. Rattray played her NCAA hockey for the Clarkson Golden Knights, where she helped them to their first women's hockey championship in 2014. She's one of the best players who didn't compete in Sochi, though she seems to be making a case for herself as a mainstay up front on Team Canada, particularly as the older players retire.

# 9 Jennifer Wakefield: She started her NCAA career a the University of New Hampshire before moving to Boston University, where she would be named captain in 2011. She was cut from Team Canada's Olympic squad in 2009, but was a member of the 2014 team that won gold in Sochi. For the past two years, she has been playing professionally in Sweden in both men's and women's leagues.

#11 Jillian Saulnier: The Cornell University alum just won a Clarkson Cup with the CWHL's Calgary Inferno, where she finished third in scoring on an offensively gifted team. What stands out about Saulnier is her team-leading four game winning goals, making her a clutch player. You can never have too many clutch players on the national squad, even when you already have Marie-Philip Poulin on your roster.

#17 Bailey Bram: The five-foot-nine forward played CHA hockey at Mercyhurst College, before being drafted by the Brampton Thunder at the 2012 CWHL Draft. She was traded to the Calgary Inferno prior to the start of the 2014-15 season. Bailey has played in the last three world championships for Canada, and was among the last cuts from the Olympic squad in 2014. She comes into this tournament hot, having just won a Clarkson Cup championship with the Inferno. Her sister Shelby is also in the National Team program and plays for the Buffalo Beauts in the NWHL.

#19 Brianne Jenner: A Cornell University alumnus, Jenner currently sits second in scoring in her first season with the Calgary Inferno in the CWHL. She won an Olympic gold in Sochi in 2014 at just 22 years of age. The five-foot-nine forward shoots right, and is a mainstay in the Hockey Canada program. She was also part of the Inferno's Clarkson Cup winning roster this season.

#22 Hayley Wickenheiser: Perhaps the greatest woman to ever lace 'em up, Wick will undoubtedly be inducted into the Hockey Hall of Fame when she retires. Wickenheiser just wrapped up her rookie(!) season with the Calgary Inferno, where she joined the triple crown club, winning her first ever Clarkson Cup championship to go along with her Olympic gold medals and world championships. Wick finished up her CIS hockey career at the University of Calgary last year. Wickenheiser has been on every Olympic women's hockey roster, winning four gold medals in the process. She was the first woman to score a goal in a men's professional league when she played in Europe. She made her World Championships debut in 1994 at the age of 16.

#24 Natalie Spooner: The Scarborough native spends her days playing up front with the Toronto Furies, where she won her first Clarkson Cup two years ago right after winning gold in Sochi. Spooner played her NCAA hockey at Ohio State, where she ranks second all-time amongst Buckeyes in points, with 163. She is one of the most electrifying women's hockey players right now, definitely ranking in the top three in the CWHL alongside Johnston and Marie-Philip Poulin. Speaking of which... 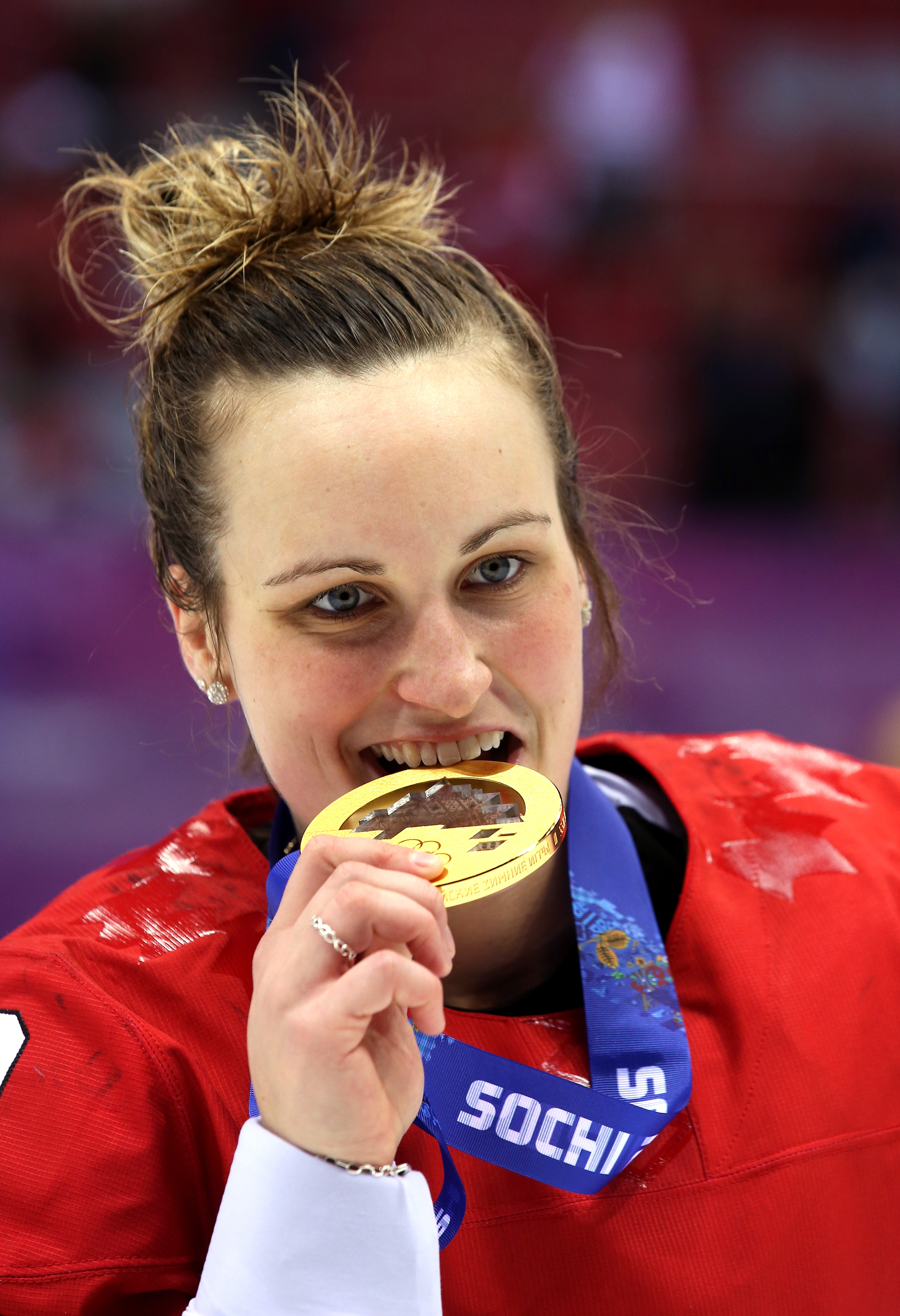 #29 Marie-Philip Poulin: It feels almost silly writing anything here other than the fact that she scored two Olympic gold medal winning goals (she scored the game-winning-goals in both Sochi and Vancouver). Poulin was the Angela James Bowl winner as a member of the Montreal Canadiennes in the CWHL this season. She was also named league MVP and won the inaugural Jayna Hefford trophy (voted by the players as the woman who shows leadership and tenacity). Poulin is a national treasure, for goodness sake. Enjoy watching her play in Kamloops.

Earlier today, she was named captain of Team Canada.

#37 Sarah Davis: Another member of the Calgary Inferno organization, Davis also played for Team Canada at the 2015 IIHF World Women's Championship, where she won silver. Fun fact: Davis is the first woman from Newfoundland to make the women's national team.

#39 Emily Clark: The five-foot-seven Saskatoon native made her debut with Team Canada at the 2014 4 Nations Cup. Also in 2014, she joined the Wisconsin Badgers program, where she is currently playing. Clark shoots left, and won silver at last year's championships.

#40 Blayre Turnbull: The five-foot-seven 22 year old has competed in back-to-back 4 Nations Cups as a member of Canada's team. A rookie with the Calgary Inferno, the Nova Scotia native scored two goals in Calgary's 8-3 rout of the Canadiennes in the Clarkson Cup final. Turnbull rounds out the offense quite nicely for Team Canada.

#3 Jocelyne Larocque: A mainstay on the Brampton Thunder's blue line in the CWHL, Larocque is an Olympic gold medalist who played her NCAA hockey at the University of Minnesota-Duluth, where she helped her team to an NCAA national title in her freshman season (they would repeat as champions with Larocque on the back end in 2009-10). 2016 marks the Manitoba native's fifth appearance at the World Women's Championship, where she'll be looking for her second gold medal.

#4 Brigette Lacquette: The University of Minnesota-Duluth hockey program is great at churning out defensive talents, and Lacquette is just another example of that. Lacquette graduated in 2015, and was then drafted by the Calgary Inferno of the CWHL in the fifth round. She went on to help the Inferno to their first Clarkson Cup win, notching an assist in the 8-3 victory over the Canadiennes in the championship game. Lacquette made her debut with the national team in Malmo, Sweden last year, when Team Canada won silver. 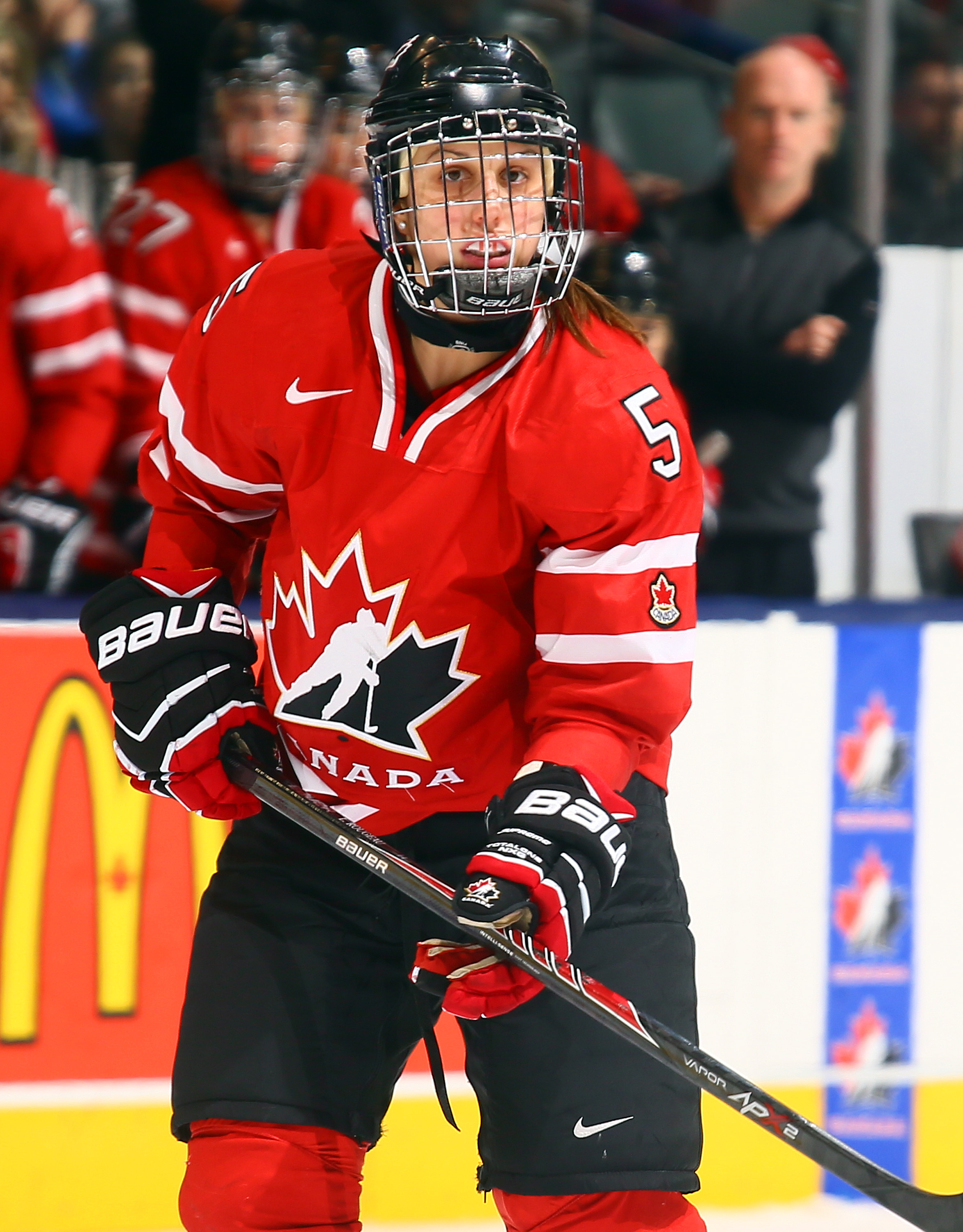 #5 Lauriane Rougeau: Rougeau is manning Team Canada's blue line at the World's for the fourth time, looking for her second gold medal. Rougeau was also part of Team Canada's 2014 Olympic gold medal winning roster, and can be found on Les Canadiennes' back end in the CWHL. She finished the 2015-16 CWHL season tied for second in scoring among defensemen. Rougeau is part of a small group of women who belong to the triple crown club, having won a world championship, and Olympic gold, and a Clarkson Cup. The 25-year old defender shoots left, and stands tall at five-foot-eight.

#8 Laura Fortino: Fortino was the 2016 CWHL defenceman of the year, finishing first in the league among blue liners with 28 points in 24 games. Fortino was part of Cornell University's Big Red hockey program, where she led all defenders in the NCAA in scoring in her rookie season. She may be small (she's only five-foot-four) but she is one of the fastest players in the women's game. The Hamilton, Ontario native didn't just win an Olympic gold medal in 2014, but she actually assisted on Poulin's game winning goal in the gold medal game in Sochi. Fortino has a gold and two silver medals at the World Championships.

#12 Meaghan Mikkelson: Mikkelson is one of the rare blue liners on this team who shoots right. She's coming off a Clarkson Cup win with the Calgary Inferno, in a season in which she only played 11 games (she missed the beginning of the season due to the birth of her son, Calder). Mikkelson adds size to Team Canada's back end, standing at five-feet-nine-inches. She's got a wicked shot from the point that is enough to intimidate any netminder. She joined the triple crown club when she won the Clarkson Cup with the Inferno, as she was already a two-time Olympic gold medalist (Vancouver 2010 and Sochi 2014), and won gold at the world championships in 2012. This is Mikkelson's sixth appearance in this tournament. 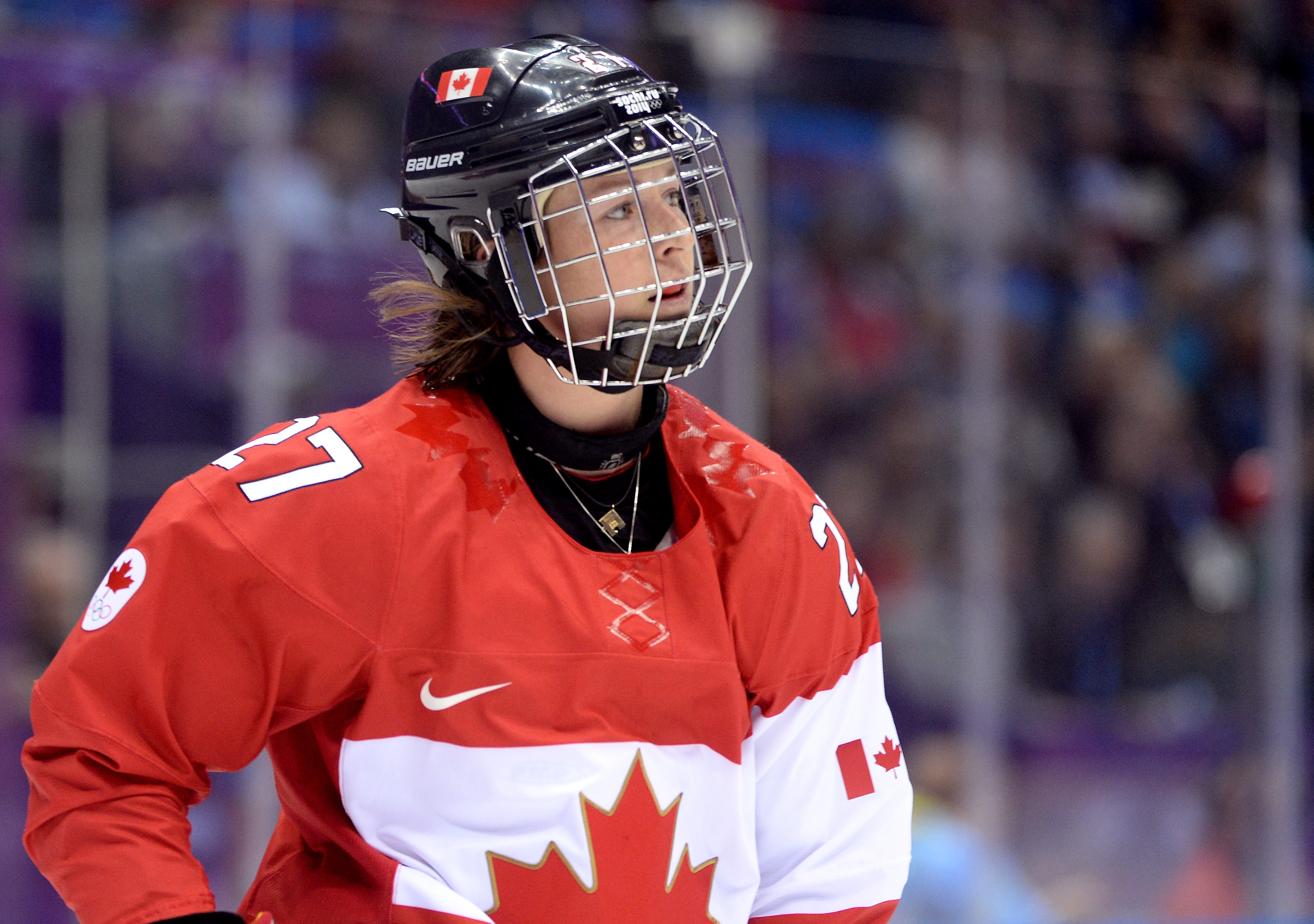 #27 Tara Watchorn: If there's one player on this roster who has to be the happiest to be in Kamloops this week, it's Tara Watchorn. Coming off the hardest season of her CWHL career with the last-place Boston Blades, Watchorn is going to be hungry for victory. The five-foot-nine Ajax, Ontario native is looking for her first world championship. If she and Team Canada accomplish this feat, she will join the triple crown club, having already won a Clarkson Cup with the Blades last season, and an Olympic gold medal with Team Canada in 2014 in Sochi. Fun fact: the 25-year old southpaw played on the same hockey team as the Colorado Avalanche's Matt Duchene when she was younger.

#38 Halli Krzyzaniak: She is making her second appearance at the world championships, having gone to Sweden with Team Canada last year. The five-foot-seven Manitoba native is no stranger to winning on the international stage, having won gold with Team Canada in 2012 at the U-18 World Women's Championships. Krzyzaniak is still playing NCAA hockey, and just wrapped up her third season with the University of North Dakota.

#30 Emerance Maschmeyer: Maschmeyer plays for Harvard in the NCAA. She was drafted by the NWHL last year (the NWHL drafts NCAA juniors a year before graduation, while the CWHL drafts players upon graduation.) She has played two exhibition games and appears to be the backup goaltender and should get at least one game for Canada in these championships. 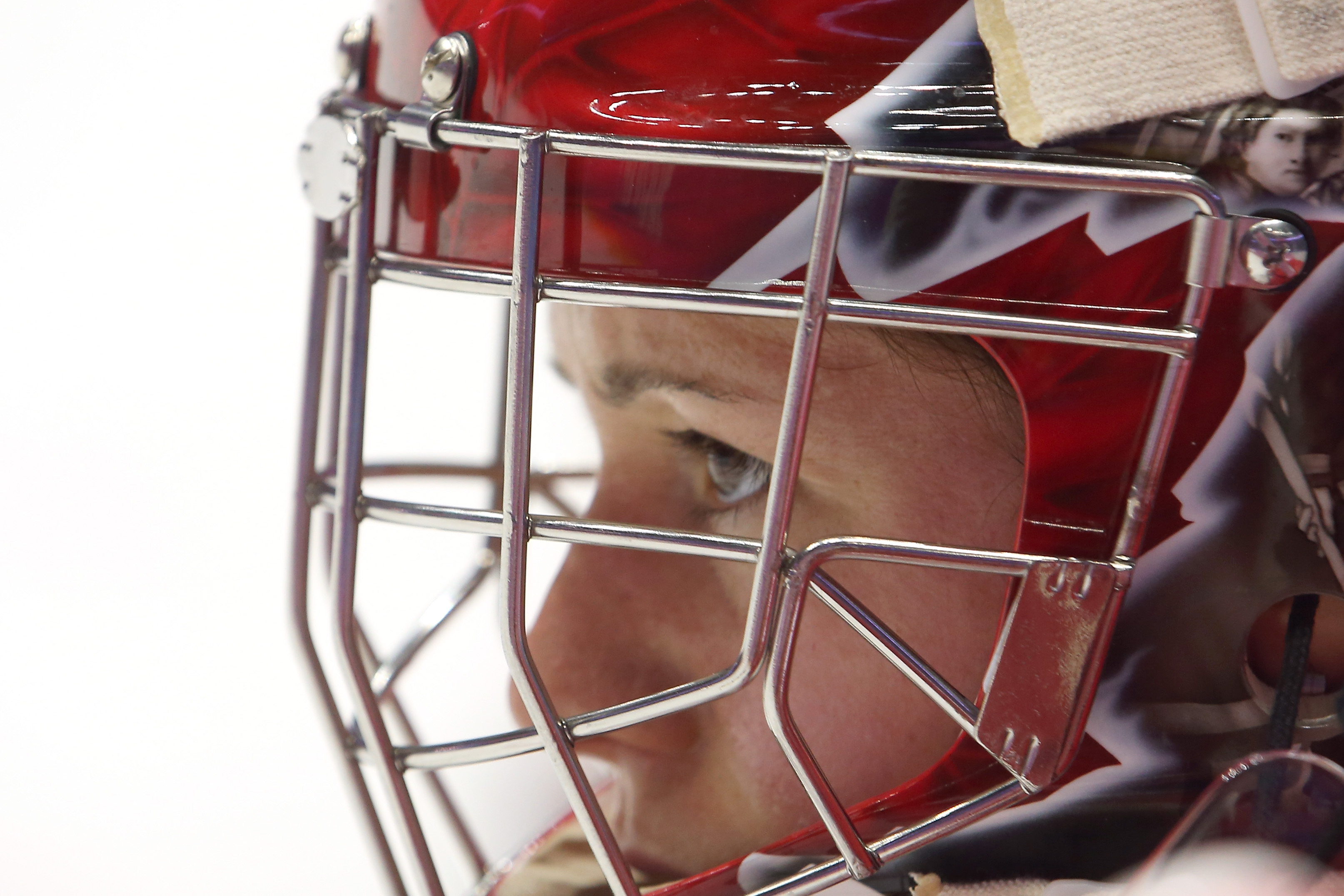 #32 Charline Labonté: Charlie talked all year along about the sour taste that Montreal's overtime loss to the Blades in the Clarkson Cup final last year left in her mouth, only to lose again in the CWHL's championship game again this season. She was not a happy camper after the 8-3 loss to the Inferno, and will be looking to close out her season on a positive note. Winning her third world championship should do the just the trick! Labonté has been part of Hockey Canada's Olympic program since 2002, where she was the third goaltender. She led Canada to the 2006 gold medal and she was also part of the 2010 and 2014 gold medal winning squads. She played CIS hockey at the McGill University, where she was arguably one of the best goalies in Martlet history. Labonté was named goaltender of the year for the second straight year at the end of the CWHL's regular season. She should be the starter for Team Canada at this tournament.

#33 Erica Howe: The Brampton Thunder netminder is making her first appearance at the world championships with Team Canada, though she is no stranger to the international stage. Howie, as she known to her teammates, won gold with Hockey Canada's U-18 squad in 2010, and has participated in several 4 Nations Cups, winning gold in 2014. She played NCAA hockey at Clarkson University, where she won a national title in her senior year in 2014. She didn't play in the pre-tournament games and is conceivably the third goaltender in Kamloops.