The Habs took on the Rangers in Montreal and an embarrassing lack of effort led to yet another loss.

Sven Andrighetto will be suiting up for the first time since the hit he took from Dion Phaneuf on March 19th. The lines were interesting with Paul Byron remaining on the first line and Michael McCarron on right wing. 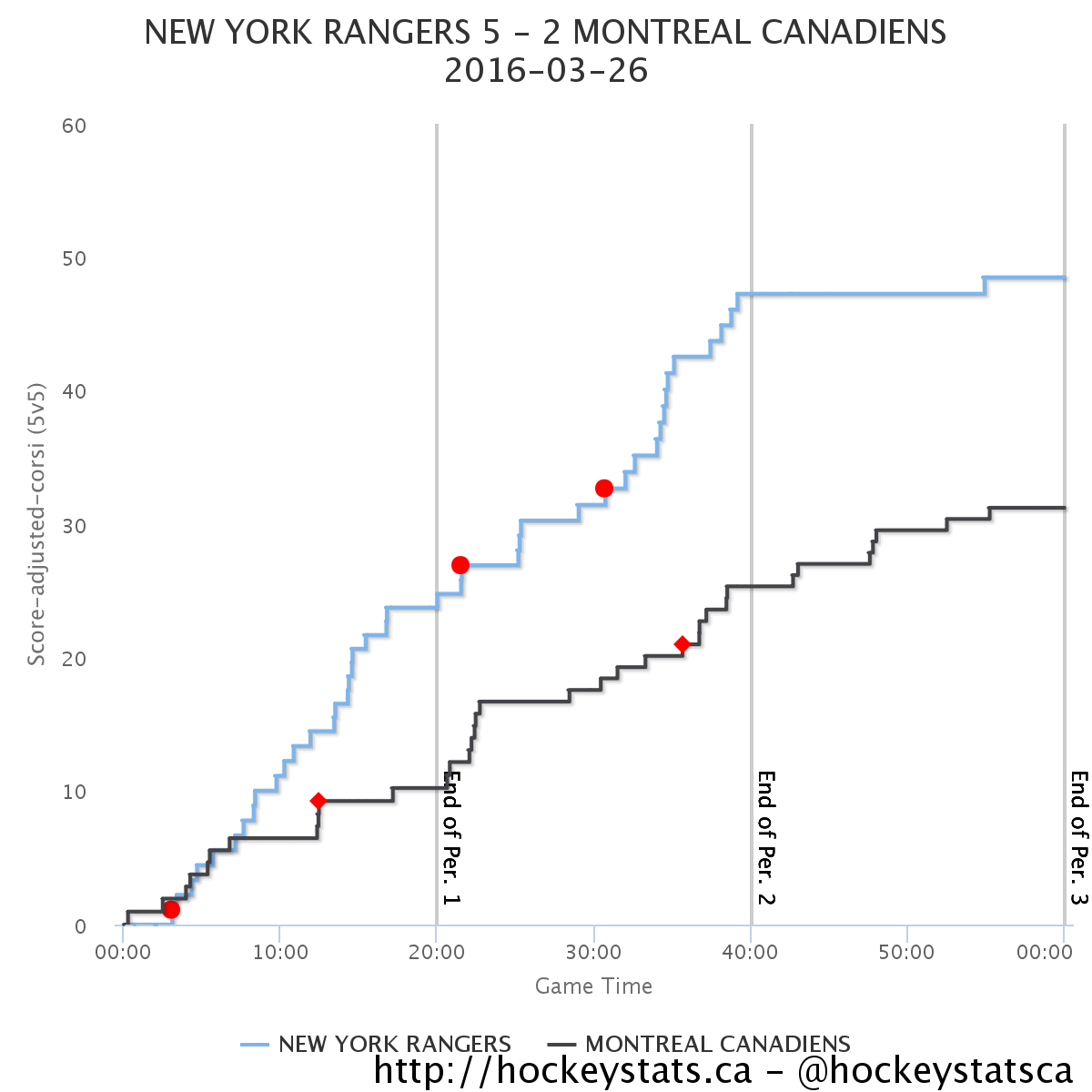 The Habs looked pretty decent for the first few minutes of the period, however an ill-timed hit by Alexei Emelin on Derek Stepan led to a beauty of a dangle by J.T. Miller on Andrei Markov to put the Rangers up 1-0. I am not a fan of the Emelin-Markov pairing. Not one bit.

Lars Eller was a total beast during the first period; jumping on loose pucks and continuously winning puck battles. Mid-way through the first, Eller jumped on a rebound off of a block by Ryan McDonough and snapped a high one. it tied the game at one and can I just say that my Larry love knows no bounds.

Mike Condon made some huge saves during the first period to help keep the score tied at one. At the end of the first, shots were 10-7 in favour of New York.

The tie didn't last for long as just 1:32 into the second period, Derick Brassard nabbed his first of the game. Brassard capitalized on the rebound off the boards and Condon let yet another one in through the five-hole to give the Rangers the 2-1 lead.

Markov got a penalty for holding against Rick Nash, and after a little bit of back and forth between Brassard and Keith Yandle, Brassard passed over to Chris Kreider who snuck in to the left of Condon and sniped it right by him. New York up 3-1. The Rangers' PP is now 4/9 in their last three games.

Not too long after, another giveaway led to Kreider's second of the game. Alex Galchenyuk made a pass back to Emelin who lost the puck. Emelin absolutely cannot catch up to Kreider, who speeds up the ice and nets another. Rangers lead 4-1. At least some EOTP staff members are still

Kreider scored without plowing a goalie onto the injured reserve. He's the real MVP.

Following a deafening round of boos from the Bell Centre crowd and 1:25 struggling in the defensive zone, the Habs managed to create a solid breakout led by Andrighetto and David Desharnais who set-up Phillip Danault to put the Habs within two.

It was short-lived. Emelin took a penalty with less than a minute left in the period. The Habs end up chasing the puck, which left Stepan alone in front. It took the Rangers all of eight seconds to score on their powerplay. Montreal, take some notes, will you? At the end of the second period, shots were 18-17 in favour of New York with a score of 5-2 - meaning that of the 8 shots the Rangers had on net this period, four ended up in the net.

The Habs had six straight minutes on the power play due to three separate tripping calls. You guessed it - they were not successful. Joel Hanley even saw some time because hey why not try everything! The Rangers received a power play, followed by two minutes of 4-on-4 hockey, but nothing came from it.

The Habs got their sixth power play with a little over four minutes left in the period. They are 0/5 with only eight shots. By the sixth, even the announcers said, 'For the sake of pride, you want to come close or get one." Yeah. They didn't.

End of the game, shots were 26-23 in favour of Montreal with a final score of 5-2 for the Rangers.