Canadiens vs Flames Game Recap: Big Mac gets one as Habs lose again

Share All sharing options for: Canadiens vs Flames Game Recap: Big Mac gets one as Habs lose again

Maybe Montreal teams should just stop playing Calgary. One week after Les Canadiennes fell to the Calgary Inferno in the Clarkson Cup, the Montreal Canadiens fell 4-1 to the Calgary Flames on Sunday at the Bell Centre. 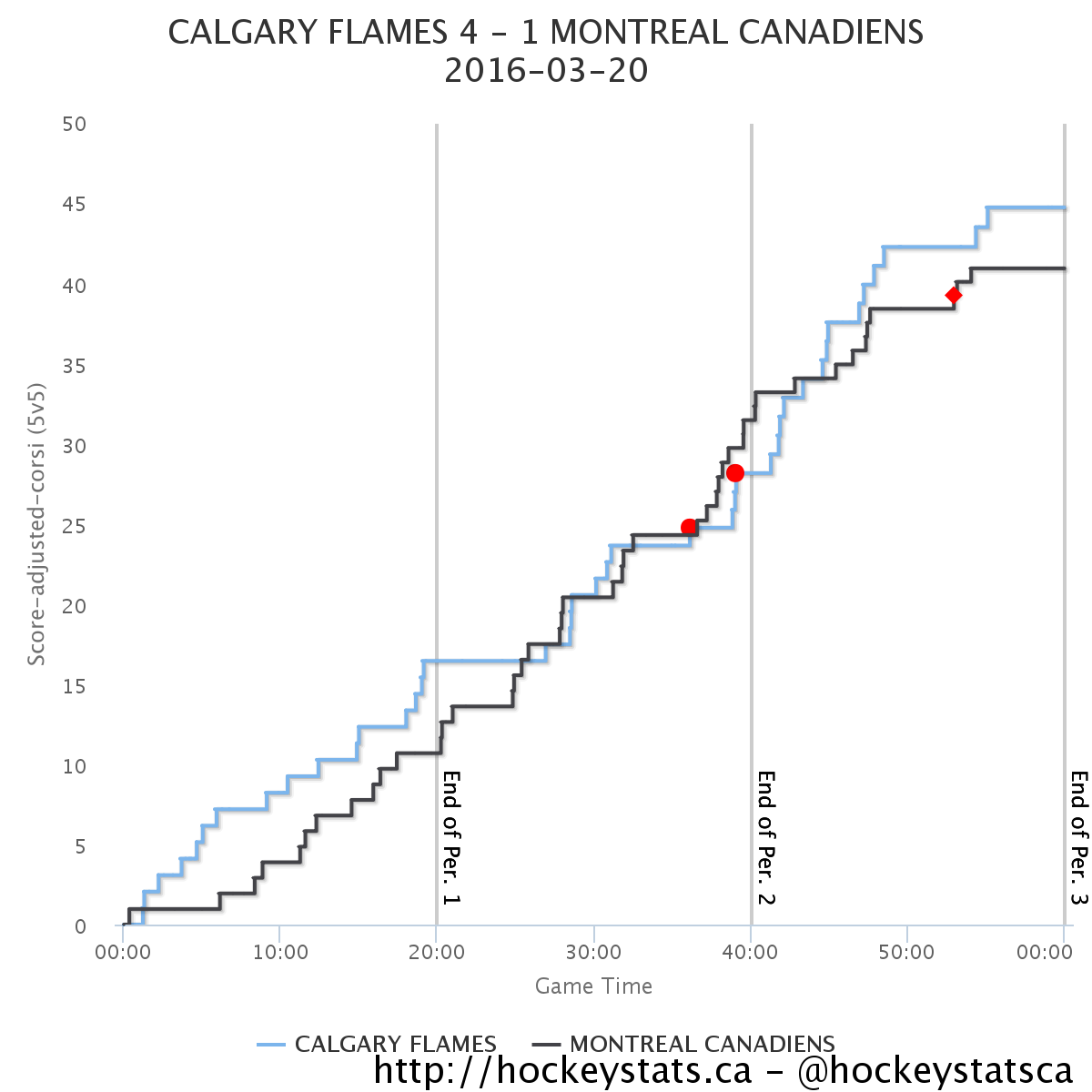 Calgary was starting Niklas Backstrom, who was making his first start in over a year. Seriously. His last start was January 13, 2015 when he allowed six goals against the Pittsburgh Penguins. That was before Devan Dubnyk. Montreal was a playoff team. And he won, making 21 saves. He wasn't tested much, but did make some big saves early on when the game was still scoreless.

Mike Condon got the start for the Canadiens and it was a weird beginning. Ben Scrivens was initially in goal as Condon was late to get to the ice. It was suspected he was hurt by a Greg Pateryn shot in warmup, but Condon did make it in time for the opening faceoff and was pretty solid on the night, making many saves, including this one in the first period.

Joe Colborne opened the scoring late in the second period finishing a perfect tic-tac-toe passing play between Sam Bennett, T.J. Brodie and Colborne was standing on top of the crease and had an easy tap in past Condon.

Before the end of the period, Sean Monahan was left alone in front much like the first goal and tipped in a Dougie Hamilton shot which Condon had no chance on. It was pretty much a carbon copy of the first goal as the Habs inexperience on defence is showing.

Calgary made it 3-0 when Monahan found Johnny Gaudreau who fired a shot on Condon that snuck its way through. If the first two goals were ones where the team let Condon down, this is one that Condon would probably want to have back.

Less than three minutes later, Monahan scored his second of the game when he put home a Hamilton rebound on the power play. He was battling with Alexei Emelin, and put home his own rebound over Condon's pad.

The Canadiens finally got on the board when Michael McCarron tipped a Nathan Beaulieu shot past Backstrom for his first NHL goal. It is the type of goal that you would expect McCarron to score many times in the NHL due to his size and he made a really skilled tip.

Phillip Danault got an assist on the McCarron goal, but there was an injury scare earlier in the game when he was hit hard. He laboured to the bench but did not miss a shift.

- It wasn't a great game by any means for the Canadiens, but it wasn't as lopsided as it appeared. The 5 on 5 shots were pretty even. But let's get real. This team is barely an NHL team right now. They are dealing with tons of injuries, tons of new faces and with people in and out of the lineup, little chance to create some chemistry. They also aren't very good. These players want to win, they are playing hard, but they just can't get anything going.

- Getting 22 shots on a goaltender playing his first game in 14 months is embarrassing. There's no way around that. Yes, it was their second game in two nights, but you can't excuse that. Yes, they have injuries - and I literally just talked about them - but there are enough NHL players on this team to create more offence than what we saw. I don't know what's wrong with this team. It's part injuries, part system, part luck, part frustration but it all combines to a loss.