Canadiens vs Flyers Game Recap: Groundhog Day means another loss for the Canadiens

Another game, another injury, another failed comeback, another loss.

Share All sharing options for: Canadiens vs Flyers Game Recap: Groundhog Day means another loss for the Canadiens

The Habs entered Philadelphia having won a single game in their last nine attempts there, and a fan could be forgiven for lacking optimism that the team would come out on the winning end tonight. 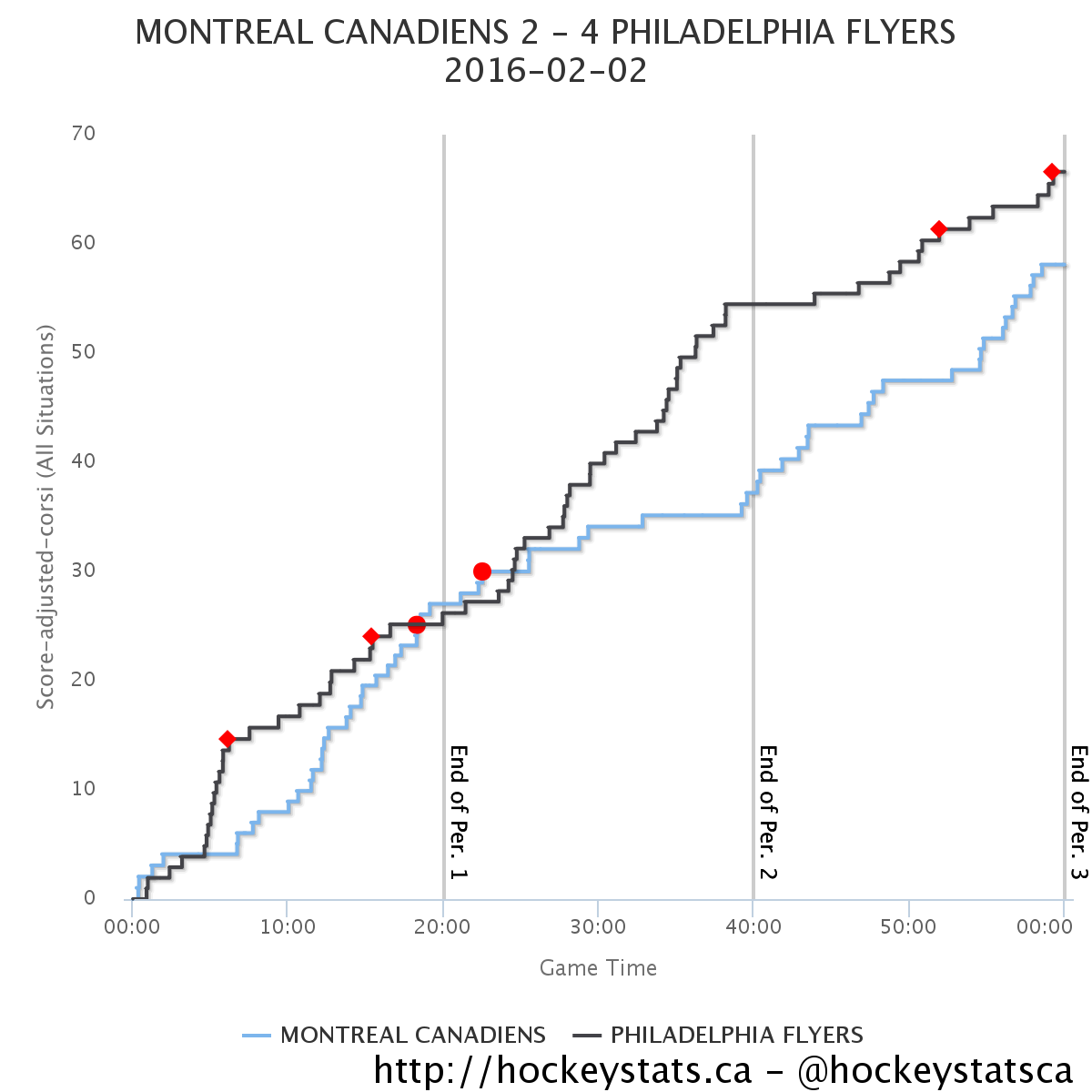 The All-Star break has done little to leaven the pervasive pessimism that has settled on the Canadiens like a thick fog, and facing a team that has manhandled the Habs for the better part of two seasons didn't seem a recipe for correcting the issues that plague the team.

Alexei Emelin's delayed return to the team following the break made for an interesting combination on the back end, with Gilbert and Barberio joining Markov, Subban, Beaulieu and Petry to form an enviable complement of puck-moving defenders.

The forward lines? Well, Pacioretty was back with Desharnais and Weise. Galchenyuk started on the wing. Smith-Pelly slotted in the third line over Andrighetto. Basically, it was the same lousy status quo.

And that status quo would be maintained throughout the first period, as Philadelphia took advantage of a powerplay four minutes into the game and scored just prior to its expiration, with Wayne Simmonds finishing the type of passing play that makes Habs fans water at the mouth. East-west passing, quick puck movement: it works.

Although Montreal would begin to control play, Max Pacioretty would find himself the victim of a questionable interference call moments later. Montreal's starting goalie Mike Condon again suffered a goal against on the powerplay, this time a tip in from Brayden Schenn from just in front of the goalmouth.

It looked like it was gonna be bad. In a sense, it already was.

The Habs continued to press though - you can fault this team for a lot, but you can't fault them for giving up easily - and it was a Philadelphia penalty that offered an avenue for the team to get on the scoresheet. Alex Galchenyuk zipped a shot towards the net and was thwarted by an acrobatic toe save from Steve Mason, but the rebound bounced off the end boards to a sneaking Andrei Markov.

The period would end with Montreal trailing 2-1.

Montreal would continue to press for the equalizer in the second period, and it wouldn't take them long to find it. Two and a half minutes in, some good work from Nathan Beaulieu led to him setting up Jeff Petry, who beat Mason through a screen to tie the game. According to Sportsnet's Jon Bartlett, it was the first time Montreal had two goals from defencemen since November 20. For the uninitiated, that is a long-ass time.

This being Montreal, though, no good news comes easy. Philadelphia would proceed to walk over the Habs for long stretches in the second, including through a few powerplays, and the shots would favour the Bullies 17-7 at period's end. Montreal's propensity to leave loose pucks drifting in front of Condon led to more than a few point-blank saves from the netminder, who kept his team in it through a dismal second period.

Through two periods, the teams had combined to go 3/6 on the powerplay, and it's abundantly clear to anybody familiar with the Canadiens' season that a special teams' game would not favour the visitors. Discipline was going to be essential if the Habs wanted to carve out a win here, but with Condon's stalwart goaltending and more timely scoring, the Canadiens could start their post-All-Star break season on a high note.

But of course, this being the 2015-2016 Montreal Canadiens, it wasn't to be. Less than a minute into the third period, Jakub Voracek offered the Habs a golden opportunity to take the lead by taking a penalty against P.K. Subban. The Habs failed to capitalize.

Wayne Simmonds scored halfway through the third, left wide open as a crowd of Montreal sweaters gathered in front of the net. Wayne Simmonds always seems to have a strong game against the Habs, and that's certainly the case for him against a lot of teams, but the fact that he's just the type of player Montreal needs only hurts more.

It wouldn't truly be a stinging loss if Montreal didn't have another opportunity to tie the game, though. Enter Radko Gudas.

The five minute penalty for clipping would see a powerplay that iced Tomas Fleischmann, Dale Weise, and Devante Smith-Pelly at various points. This is the murderer's row of snipers Michel Therrien opted for when hoping to tie this crucial game against a fellow challenger for a wildcard spot.

Yes, Alex Galchenyuk botched a bouncing one timer, and yes, Steve Mason was tuned in to P.K.'s point shots all night. Yes, an empty netter was all that separated this from a one-goal game. But in the end, Montreal lost, they lost the game again, and the collective soul of this team is absolutely shattered as they continue to plummet in the standings.