Canadiens vs Coyotes Game Recap: Well, that could have gone better

It wasn't a bad start but much like the Canadiens season, this one got a lot worse, quickly

Share All sharing options for: Canadiens vs Coyotes Game Recap: Well, that could have gone better

The Montreal Canadiens looked like they were turning a corner. Only they turned the wrong way and went straight into the wall. There are many other metaphors you could use to describe the latest in a bunch of low points on the season.

The only thing for sure is that their 6-2 loss to the Arizona Coyotes makes you wonder why there was any hope in the first place.

After a pretty good start, Martin Hanzal tipped an Anthony Duclair shot past Mike Condon less than five minutes into the game. It wasn't a particularly bad goal to let in, but one of those goals that you'd like your goaltender to stop to keep the game scoreless.

The Canadiens answered right back when Jacob de la Rose used great speed to get deep in the Coyotes zone and made a no-look pass to Dale Weise who didn't miss from there to tie the game at one.

It was the best play I've seen de la Rose make at the NHL level and something he needs to show more of to stay at this level. He has more talent than a fourth line player and some offensive potential and the quicker he can show that, the better off the team will be and the quicker de la Rose will stick in Michel Therrien's lineup.

I usually think of de la Rose as a grinder, but he's always had offensive upside and finally was able to show it. 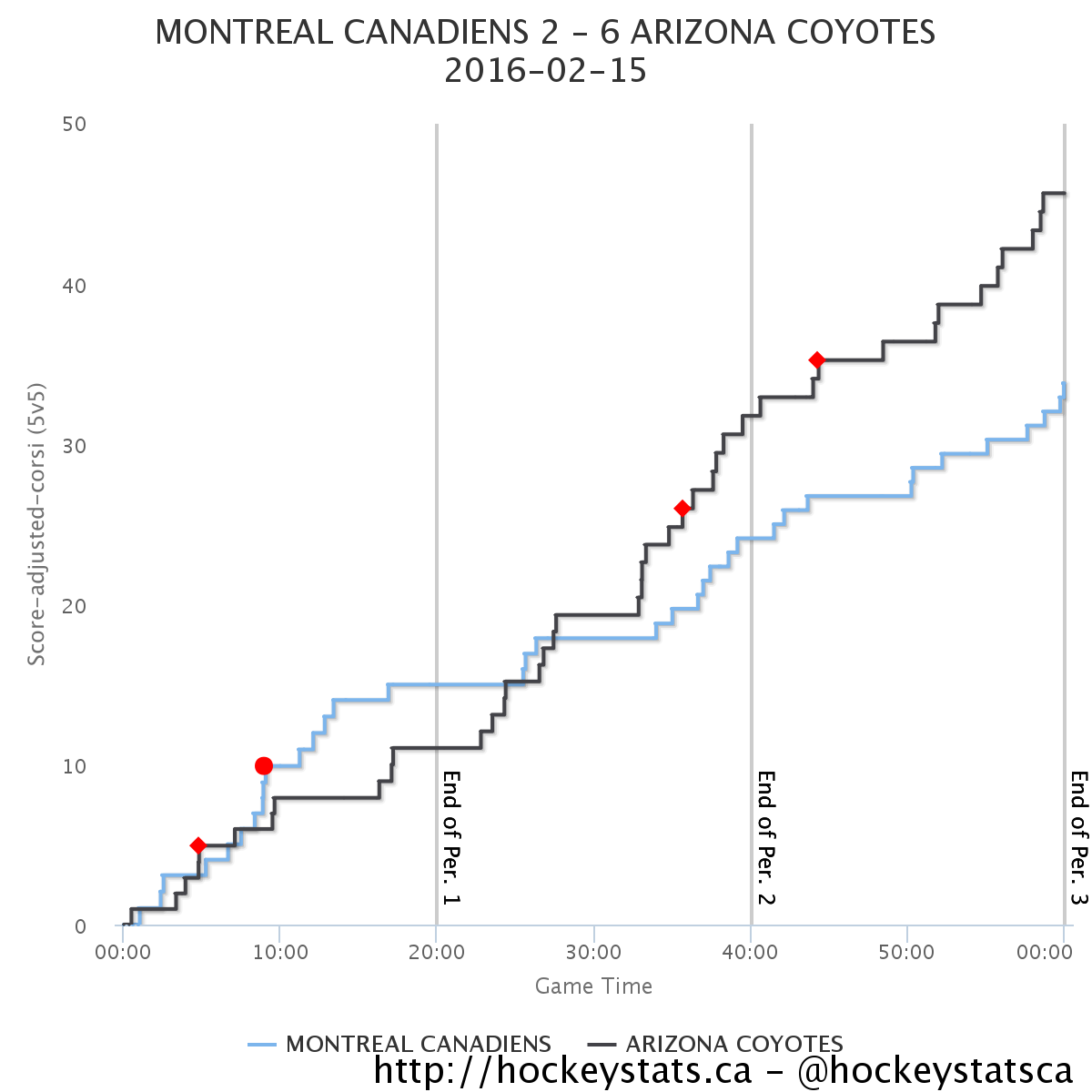 After a questionable penalty to David Desharnais, Condon had trouble handling a puck and the rebound went right to Anthony Duclair who didn't miss a wide open net to make it 2-1. Alexei Emelin was labouring after getting a puck to the leg and couldn't get off the ice.

Emelin was also covering Hanzal who tipped in the Coyotes opening goal.

After the goal, the Canadiens had a three-on-one when Brendan Gallagher passed the puck to Alex Galchenyuk but Domingue made the save. The Coyotes came right back and drew a penalty on P.K. Subban.

Things got dicey in the second period and it started with the skirmish in front of the net between Greg Pateryn and Max Domi. It ended with Pateryn getting called the major and game misconduct for cross checking.

During 4 on 4 action, the Coyotes struck again. Brad Richardson scored his sixth to make it 3-1.

The Canadiens came right back when Brendan Gallagher scored a weird one that somehow made its way past Domingue.

When the Domi penalty ended, Paul Byron had a shorthanded breakaway that he just couldn't bury, hitting it off the post.

It ended up being costly because it was almost immediately followed by a power play goal from Oliver Ekman-Larsson who fired a wrist shot off the post and in to make it 4-2.

It was more of the same when Kevin Connauton and Antoine Vermette scored for the Coyotes as if there was any doubt left in the game.

If the loss to the Buffalo Sabres was OK because they showed some fight, this game was pretty much the opposite of that. They did find their way back into the game, but fell apart in the second half of the second period and never recovered. Therrien left Mike Condon in the game, probably because he didn't want to look like he was blaming his goaltender.

This was a team effort tonight. An effort in futility.

At this point, there's not much hope. Any optimism from the Super Bowl weekend sweep and win over Tampa Bay is gone. The Canadiens put themselves in a bad situation and can't afford any games like they had tonight.

There's still fight in the locker room, the players still seem to care. They can go on a run, but there may just be too many teams in between them and the playoffs and it may be time to hope that they don't end up in no man's land.

Today was ugly, but maybe there will be some blue skies ahead. Finland is blue, right?