To tank or not to tank: The costs and benefits of gaming the draft process

With the season slipping away, there are calls to sacrifice the remainder of the campaign and hope for a high draft pick. But is that the right course of action?

Share All sharing options for: To tank or not to tank: The costs and benefits of gaming the draft process

In 2011-12, the general manager of the Montreal Canadiens panicked and fired the head coach after the team posted a record of 13-12-7.

Earlier that season, they had experienced a losing skid of six in a row, followed by one stretching to four. Those were not all regulation-time losses, and the team was competitive ... but it was lacking something. The power play was one of the worst in the league, and wasn't helped by a mid-game trade that sent Mike Cammalleri to Calgary.

The Habs went on to finish dead last in the East that year. As a result they were able to draft third in the 2012 NHL Entry Draft, and took the player who has shown to be the best of the class to date: Alex Galchenyuk.

The Habs hadn't drafted that high since 2005, when a non-weighted lottery of all 30 teams gave the team the fifth overall selection, which was used to select Carey Price; arguably the current best player in the NHL.

With the season in disarray, some fans wonder if the team would be better off to tank and to get another elite talent with an early-round selection.

A tank is not done by the players voluntarily losing games. The competitive nature of elite athletes and the short window for a professional career in sport wouldn't allow that to happen. The team's management, on the other hand, could make decisions that move the team in that direction. Replacing an under-performing head coach with an unqualified interim option, playing goaltenders with established below-average performance, or keeping promising young players from the NHL to play less-skilled ones in the top six can all work to keep a team's ability to win low enough to finish near the bottom of the standings.

To avoid such a tactic, the NHL altered its draft rules. First it introduced a weighted lottery, then it skewed those odds away from the lowest-finishing teams (as seen in the table below), and then, for this year, went to a three-lottery system designed to keep the worst teams from automatically claiming a high draft position.

Effectiveness of the draft

Since the lockout a salary cap has been introduced for the first time since the economic situation during the Great Depression necessitated a spending limit.

Some have complained that it's now hard to craft a winning team with a limit on spending, so let's take a look at who has won the Stanley Cup in the years since the lockout (Finals appearances and record are in parentheses):

There have been 10 champions since the last full-season lockout. The same two teams make up half of them. I won't talk about each championship, but suffice it to say that it's possible to win the Cup more than once with the current system.

Pittsburgh has won once since selecting Sidney Crosby first-overall in that open lottery in 2005, and has also been a finalist in that time. Crosby won with a supporting cast of Evgeni Malkin, Marc-André Fleury, and Jordan Staal; all top-five picks. The Penguins were bad for a long time, amassed a great pool of talent, and won the Cup with a team full of young players.

Five players remain with the Chicago Blackhawks who have been key members of their three Stanley Cup wins in the last six years. Free agent signee Marian Hossa, Niklas Hjalmarsson, Duncan Keith, Brent Seabrook, Jonathan Toews, and Patrick Kane. Toews and Kane are top-three picks who have become key players for their team, and two of the elite talents in the NHL.

The Los Angeles Kings have taken a slightly different path.  While they are led on the back end by a third-overall selection in Drew Doughty, their best forward, Anze Kopitar, was selected 11th. That still required the team to have missed the playoffs the previous year, but not exactly needing a full-on tank to achieve. The team has benefitted from being an attractive destination for players and their families to go, and has also had a significant helping hand from one Jarmo Kekäläinen in recent history.

The Edmonton Oilers are another example of a team collecting top picks. The team went to the Stanley Cup Final in the first year after the lockout, and have not made the playoff since. Since that post-season appearance, the Oilers first-round selection positions, from 2007 to 2015, have been:  6th, 22nd, 10th, 1st, 1st and 19th, 1st, 7th, 3rd, and 1st again in 2015. 4 first overall pick in 10 years and yet they are not in a position to make the playoff this year.

It is safe to assume that to win the Cup you need talented players at a fair cost. While I'm not going to be the latest to make the mistake of calling a return to form for the Oilers, they have accrued enough top-end assets to get them into position to do so. Drafting high gives you that luxury, but how do you develop prospects into key contributors and manage your assets when they come off entry-level contracts is just as key.

I have to agree that it's tough to win without your best players available, and the Canadiens were without the best goaltender in the world and their top-line right winger for an extended period this season. However, sidelined talent hasn't been the only issue facing the Canadiens this season. Allowing a coaching staff that can't even figure out how to best deploy their personnel on the power play effectively to control the development of a raw talent may not the best solution to the team's goal-scoring woes. 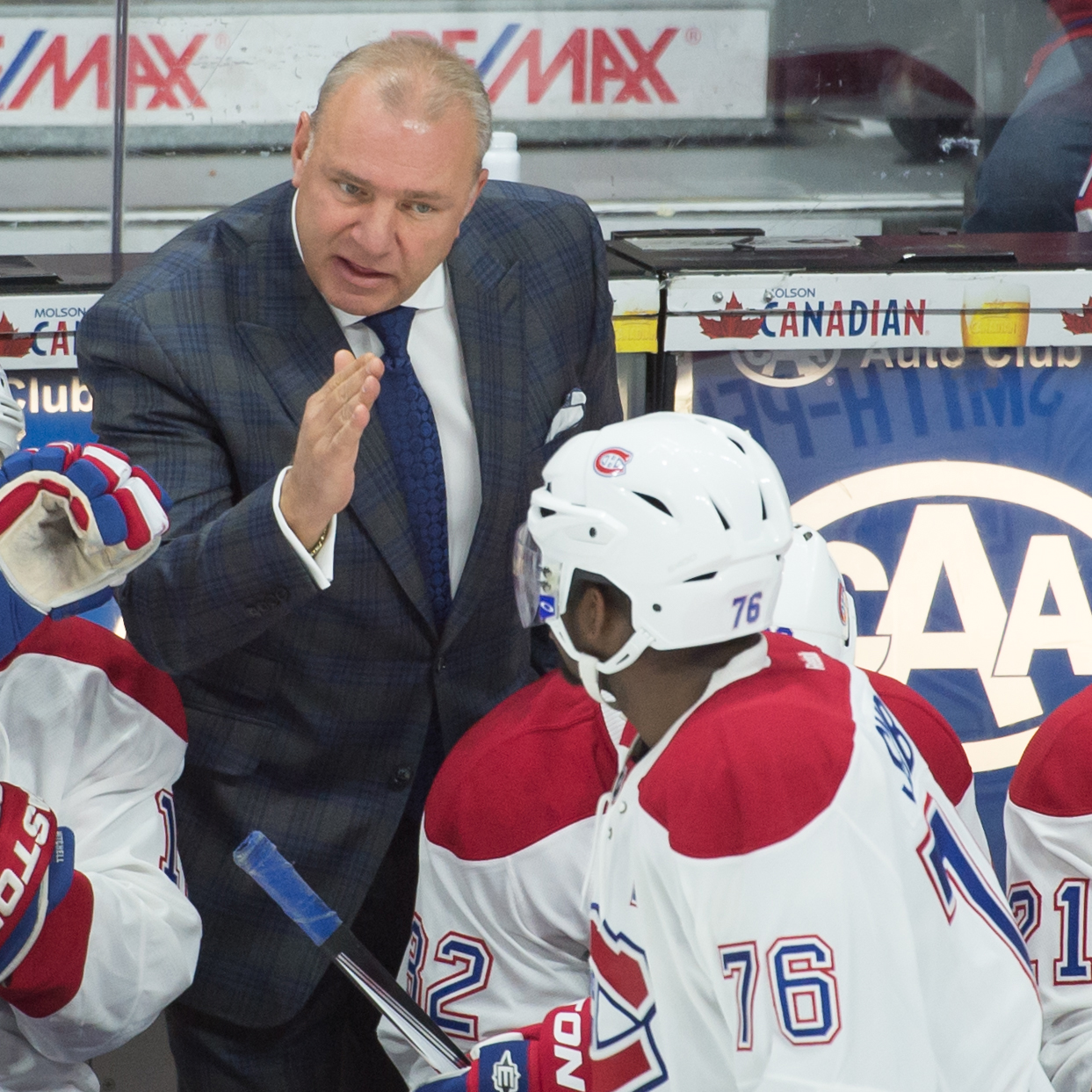 When losing becomes a trend, it is not just a roster issue. Players are stating after games how they're disappointed in their effort level in their latest defeat, suggesting that the motivation is just not there, for whatever reason. No amount of skill can overcome the belief that a one-goal deficit is insurmountable.

This year's setback may not be limited to just this campaign, either. How are you going to convince free agents of your contender aspirations when this season exposes your organization as a house of cards? You always need free agents to fill the gaps that your internal development can't fill.

Real contenders can underpay free agents, getting the favour of a pay cut for a chance for a veteran to win the Cup. Remember that Brad Richards signed for $2 million to play in Chicago before taking $4 million from a transitioning Red Wings teams.

A losing team will always need to overpay when searching the market for assets, and the cap is the same for every team, from the worst to the best. Value contracts from young prospects in their first NHL season is an effective solution to the cap limitations, but that is beginning to change.

Kyle Turris, P.K. Subban, Ryan O'Reilly, Ryan Johansen, and, most recently, Jonathan Drouin have all fought their teams for a deal more representative of their talent (or at least potential talent). This new generation of players is showing that it is unwilling to accept to be underpaid, and while the restricted nature of their situations will place the leverage with the GMs, having a hold-out from one of your stars will negatively impact your team's standing. Don't be surprised if there are more players like Jonathan Drouin sitting at home instead of toiling away in a lower league.

What's the best course of action?

Clean the house. Evaluate your staff. Start with the scouting personnel. I don't think they are the issue, but it's crucial to have people who can correctly assess the talent in the team before making decisions on it. Shake the hands of the coaching staff as they head out the door, but don't hire new ones in interim positions. Hire the right guy now and build something over the remainder of the season.

A lost season is a good opportunity to offload some unrestricted free agents, and trade some redundant or aging RFAs for picks and buy yourself some time.

Once that's taken care of, you play your rookies in an environment where winning games is irrelevant and you can get a true glimpse of what you have. While Sven Andrighetto and Jacob de la Rose have been given time for some NHL evaluation, it would be a good time to see what Charles Hudon, Ryan Johnston, Max Friberg, Michael McCarron, Morgan Ellis, and Bud Holloway can offer the club.

In 2011-12, we saw Max Pacioretty break through and Subban start his rapid rise to superstardom, and one of the IceCaps may replicate that over the remainder of this campaign.

The fan in me wants to see talent on the ice, and it's appealing to draft the cream of the crop. My analytical instincts worry of the consequences of using an elite player as a band-aid for a broken team composition. If that new savior is injured your house of cards is doomed to fall once again.