John Scott: The unlikely hero of the All-Star Game

Scott's tumultuous ride to the All-Star Game is coming to its end, and throughout it all he's been a consummate professional.

Share All sharing options for: John Scott: The unlikely hero of the All-Star Game

To call the situation surrounding the All-Star Game and John Scott a fiasco is an understatement, yet the man embroiled in the middle of it all has shown hockey fans his true character. Yes, John Scott punches people for a living in the NHL, and yet he has become a fan favorite in less than a months time.

So, how exactly did a 33-year-old career fourth liner end up in something that sounds like a poorly written Disney movie?

Scott overwhelming received the most votes for the Pacific Division captaincy for the All-Star Game in Nashville this year, and the chain of events that followed is unprecedented.

He was originally sent down to the minors by the Arizona Coyotes, called back up, then traded to the Montreal Canadiens, who then promptly dumped him in St. John's, thus technically making him ineligible for the All-Star Game.

Scott himself detailed his emotions about this trade in a Players Tribune article, he had been with his Coyotes teammates when it happened, and it's hard to not feel for the guy.

I've been gone for a couple of days - but now I'm back in Phoenix, at the Coyotes practice facility, catching up with the boys. We're getting some stretches in, and passing around my new gloves.

I've seen my name in the news,on the press release,on the official rosters. But even still: there's something about gear, you know? I, John Scott from Michigan Tech, at 33 years old...have All-Star gloves.

Now we've all had that shining moment at one point or another in our lives, this was supposed to be that moment for John Scott and unfortunately it was nearly ripped away from him.

With two young kids at home and a wife pregnant with twins as well, Scott would have to pack up everything and move to the other side of the continent to play minor league hockey.

He could have outright refused to report, yet the long time enforcer showed up at the Mile One Centre on a Saturday night and with two suitcases in hand he happily signed autographs for fans. He was part of a post game scrum too, even after a full day of flying and getting settled in an unfamiliar city without his family. Again he was all smiles and laughs despite the rough situation he found himself thrust into.

Shortly thereafter, the details started to emerge surrounding Scott and the All-Star Game, how Don Maloney and Bill Daly had both asked him to not go, offering a paid vacation instead. In perhaps in the lowest point of this entire saga, someone at the NHL tried to use Scott's children to bully him out of the game.

It means a lot to my family.

So when someone from the NHL calls me and says, "Do you think this is something your kids would be proud of?"

That was it, right there. That was the moment.

Because, while I may not deserve to be an NHL All-Star, I know I deserve to be the judge of what my kids will - and won't - be proud of me for.

The gall shown by the league representative is reprehensible, Scott, for all his faults, at least wants to go to Nashville for the game. Jaromir Jagr has said several times now he doesn't want to go because he's too old, and Johnathan Toews along with Alex Ovechkin withdrew from the festivities at the last minute.

Even Scott's teammates knew the league would try to prevent him from going.

"They'll never let you play, John. They're never going to let you be there.

Despite this, Scott never stopped smiling, and managed to keep his positive attitude. 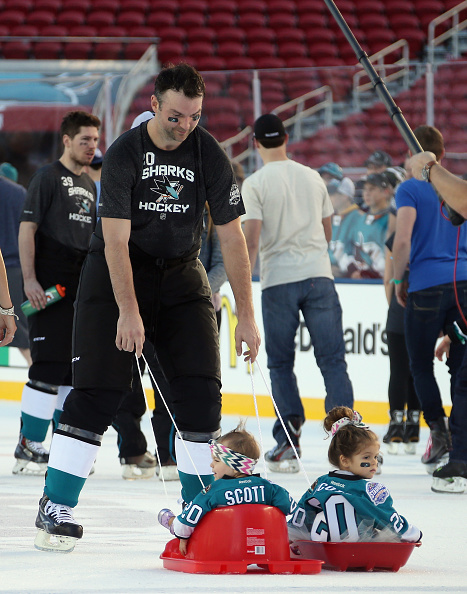 Upon removing Scott  from the game the NHL and their social media platforms felt the wrath of the fans, a quick glance at their Instagram page revealed nothing but comments saying "#FreeJohnScott".

It's clear the fans were on Scott's side, and they wouldn't be satisfied until their new hero got his moment in the sun. After days of unrelenting pressure and a PR nightmare, the NHL caved. They were going to let John Scott play in the NHL All-Star Game. Albeit he would be wearing a blank All-Star Game jersey in the skill competition, this in spite of Scott himself saying he's wanted to wear a St. John's IceCaps jersey, because "That's who I play for now".

I hope John Scott goes out there and the fans blow the roof off the arena cheering for him. One thing no one can dispute is that he's been a perfect gentleman considering the circumstances. His former teammate Brent Burns is ready and waiting for him in Nashville, and so is a bevy of new John Scott fans.

It doesn't matter what kind of role Scott plays on the ice. He's taken unfair treatment in stride, and brought way more attention to this game than it's ever had before.

People can stomp their feet and claim "it's embarrassing to the league and the All-Star Game" all they want. But, the game features a Velveeta cheese fountain, celebrity coaches no one has heard of, and most importantly it's an exhibition game.

He's become the saviour of the All-Star Game, and legions of people have become fans of Scott, the every-man who is living his dream with a smile ever-present on his face.

In the long run, aren't events like the All-Star Game put in place exactly for that reason? For fans to get in touch with players they can relate to. In many ways, there's no better person to connect with the fans than John Scott.