I have been a member of dis blog for quite some time. I have seen de ups and downs, I lived through de swings in Momenthum, and I've even witnessed a change at de top.
Recently, I have noticed some negativity around dis blog. Not just in de comments section (where it is to be expected -- haters gonna hate comment), but also in de articles.
Such an amount of Bad Attitude can only lead to animosity. I was even compared to Donald Trump, and I'm not sure why. De fact dat dere are no Mexicans or women on de team is a pure coincidence, I swear. We even had a Diaz at some point, but we had to trade him away.
I played de Corsi game, and you didn't like it. It's not my fault de players won't play de way dey should, despite my superior motivational skills. I tell dem "Are we de Montreal CANadiens, or de Montreal CAN'Tnadiens??", but dey don't play. I tell Chucky "For every hat-trick you give me, I'll add 00:15 to your ice-time", but he don't score. You people can turn on your NHL16 and max out your player's Character rating to 99, but I'm stuck wid de Ellers and de Beaulieus of dis world. Still, I do my part as de Coach.
I also do my part in de comments section. I regularly make constructive, well-argumented comments dat aim to educate you about de game of hockey. I'm no François Gagnon, I'll be de first to admit it, but I'm not exactly a fool eater.
I have posted a free chapter off my neo-noir novel, Dere is No Ice Rink in Hell. I have even given free advice on how to prepare de best chicken wings you'll ever eat (bascially you order dem).
And I provide you wid nice gifs. EODP's gif game isn't always on point, but my gif-coaching efforts have time and time again brought some decency to dis site. And while most gif and take, I just gif, witout asking for anyting back.
Dese reasons alone should be enough for me to catch a break. But since dis is EODP, and we need to have a basis to our arguments and blah blah blah, I decided to take a shot at dis advanced stats ting and determine, once and for all, which individuals are truly qualified to comment on my coaching.

De method I used for my analysis is pretty standard among good coaches. Even Babcock uses dis, and I know he's de darling of de Interwebs. I don't understand how you can have dis one guy, dat you love and value more dan odders despite him not being as good, and den dose coaches dat are way better get less exposure as a result. But dat's another matter...
As for de method, basically you take some numbers, you make some calculus, you take four Large double-doubles, and den you make nice graph.
To begin, I had to estimate how many users are on dis blog dat aren't strictly lurkers. I didn't have any geek to give me de numbers, so I took an educated guess and picked 300, for 2 reasons. First, because it's my graph. Second, because it was a good movie. I like to tink dat Leonidas and I are de same, fighting wit our team/children against hoards of haters, reporters, and Bruins players (or Persians in Leo's case). Dey may put arrows through our hearts, but damnit we'll put Pucks to de Net! Dat was my favorite quote from de movie.
Anyway, after dat, I had to define exactly what I was looking for. Once I eliminated stat nerds, washed up colomnists, bottom-feeding reporters and low-life fans (no offense), I was basically left wid de one determining factor when evaluating one's qualifications when it comes to questioning coaching decisions: whether or not dat person is de Coach. 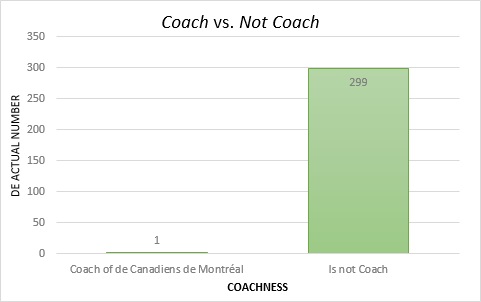 De results were astounding. I turns out only 0.3% of de people here who claim to know anyting about hockey are actually qualified to make coaching decisions.
De fact dat 299 of dem are not de Coach of de Canadiens de Montreal took me by surprise, like dat time Bergy acquired a right-winger and I thought he'd actually be a legitimate top-6 guy, only to realize he wasn't worth anyting. Wait, dat's, like, every criss de time.
Anyway, by den de conclusion was pretty obvious. All dat was left to determine was who exactly was de Coach of dis team.
I am. I'm de fucking Coach.
I love you all, and it was heart breaking to realize dat #FireTherrien was not aimed at promoting my band Eart, Wind and Fire Therrien, but rather a desperate attempt at kicking me off de boat. Let me right dis ship, or let me sink wid it. Because if dat's what a Captain should do, it sure as hell is de Coach's duty too.

Who should tell de Coach what to do?