Canadiens vs Maple Leafs Preseason Recap: Michael McCarron gets off to a good start

The Habs drop their preseason opener to the Leafs in overtime

Share All sharing options for: Canadiens vs Maple Leafs Preseason Recap: Michael McCarron gets off to a good start

Tuesday night was the start of the preseason schedule for the Montreal Canadiens who played the Toronto Maple Leafs. The former are playing their third game in two nights.

Before the game started, the Montreal Canadiens paid respect to two former players who passed away recently: Todd Ewen and Bob Fillion. A short tribute to each player was shown followed by a moment of silence. 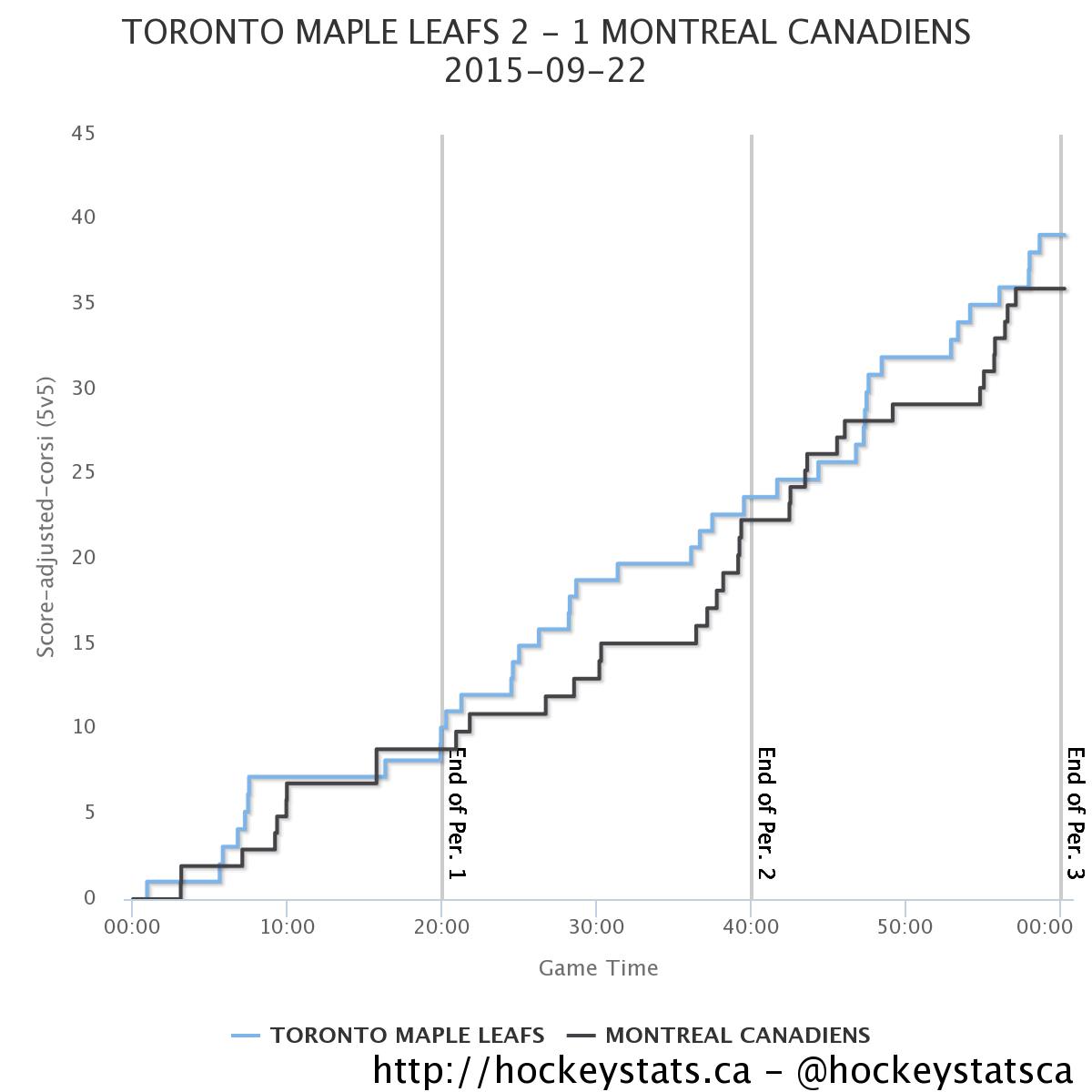 The Montreal Canadiens iced a lineup of mostly fringe players, which is exactly the point of preseason hockey: testing the depth of your organization.

The Habs management have some tough decisions coming up over the next couple of weeks, and it's a game like this that showed which guys are ready, which guys are close, and also helps the management identify any needs that the organization may have to address in development or personnel. The entire front office staff was in the house, including Trevor Timmins and his impressive scouting team.

If Michael McCarron was considered a long-term project when he was drafted two years ago, he can safely be called one of the top prospects in the organization after the game that he had on Tuesday night, and a real threat to make the team out of training camp. McCarron played physical and smart all night and earned the first-star honours with five hits and one goal in 13:18 ice time.

On his goal McCarron was dumped at the blue line by a couple of Leafs, who then peeled back into the play. Jeff Petry, wearing an A on his jersey for the game, shot the puck from the point that was blocked and bounced right to a wide-open McCarron who snuck back into the play and snapped a precise wrist shot high glove side to beat Leafs goaltender Antoine Bibeau to put Montreal up 1-0 at 15:45 of the first period.

Brendan Gallagher was being his usual self and it was easy to see why he was chosen to wear the A on his jersey. The example that he sets on the ice is second-to-none. In the first period he drove hard on the forecheck and stole the puck from the Leafs defender, then made a behind the back pass to Torrey Mitchell who had a shot from the slot that Bibeau managed to save. Gallagher continued his path, and created a screen on the subsequent shot from the point that also handcuffed the Leafs goaltender. Gallagher is always driving hard and always in the right place at the right time.

Carey Price started the game in nets, and he made some key saves look easy to keep the score 1-0 at the end of the first period. Carey Price was replaced by Zachary Fucale half way through the second period after stopping all 11 shots that he faced.

Fucale was immediately tested with a shot from Brad Boyes who tried to surprise Fucale with a shot from a difficult angle, but Fucale resisted, and made the save. After several more anxious moments and awkward saves Fucale seemed to settle down and made some difficult looking saves later on in the game. He stopped 14 out of the 16 shots that he faced.

Alexei Emelin was a wrecking ball, clearly understanding the urgency to perform as expected, first nailing Josh Leivo with a clean open ice hit that sent the Leaf into the dressing room, then hitting Brad Boyes with a questionable hit below the hip into the knees when the Leaf didn't even have the puck. Not surprisingly he drew a penalty on that play.

The final-minute curse struck towards the end of the second period when Jeff Petry put the puck into Tim Bozon's skates on a defensive zone breakout attempt, which William Nylander stole and turned it into a 2-on-1, at which point the play was academic and Nylander made no mistake putting the puck past a sprawling Fucale on a give-and-go play with Jake Gardiner. The second period ended with the score 1-1.

All eyes were on Jarred Tinordi tonight to see if he has improved his game enough to stick in the NHL. He played a team high 22:18 of ice time, partnered with Greg Pateryn who many believe is ahead of him on the depth chart currently. Pateryn played 21:38 as it is obvious the organization is taking a long hard look at both players, testing them under various scenarios.

Tinordi did not play the kind of game that will inspire much confidence in the coaching staff unfortunately, losing the puck and taking a penalty to cover up for his mistake in the second period most notably. It's still early in the preseason though and the organization will not make a rash decision without giving Tinordi a full evaluation.

Devante Smith-Pelly is looking for redemption this year after what is generally considered a disappointing season last year. He lost 12 pounds over the summer, and it showed as he was fast on the forecheck and created a scoring chance on the penalty kill in the first period. He was also involved physically in the play, throwing his body around. Unfortunately for him he took a terrible tripping penalty in the final minute of the third period when his stick got stuck in Travis Dermott's skates as they rounded behind the Leafs net.

In an interesting clarification of the new 3-on-3 rules, if a team is on the power play at the end of the third period, they start overtime with a man advantage and the teams play 4-on-3 hockey. It took the Maple Leafs exactly 16 seconds of overtime for Jake Gardiner to score a goal and end the much advertised 3-on-3 exhibition without there actually being any 3-on-3 played.

Final shots were 27 to 21 in favour of Toronto.

The Habs are back in action on Thursday, facing the Washington Capitals at the Bell Centre.