While he may be an afterthought when it comes to goaltending in Montreal, Dustin Tokarski's role is an important one. Now more than a season removed from his surprising performance in the 2014 Playoffs, how does the young netminder shape up?

The beginning of Dustin Tokarski’s current stint in Montreal was, in a phrase, baptism by fire.

Tokarski had, of course, played three NHL games for the Canadiens prior to the 2014 playoff series against the New York Rangers, in which the Humboldt, Saskatchewan native would be introduced to the hockey world at large. Neither those three games, or his international experience at the World Juniors, could have prepared him for what was to come: the pressure of a hockey mecca counting on you to bring them back to the promised land.

It wasn’t a role that Tokarski thought he would need to fill, at least not that year, but injuries in pro sports can be a funny thing. What was a heartbreaking loss for the Habs and their fans was an opportunity for Dustin Tokarski to cement himself as a legitimate NHL backup, getting the nod over veteran netminder Peter Budaj.

The rookie did just that, performing admirably in a series that would ultimately see the Habs eliminated in six games. With his .916 SV%, Tokarski did all that was asked of him – he gave the team a chance to win, even with the backbone of their lineup watching from the press box. This showing was enough to convince the coaching staff that Tokarski – despite his strange habits of fiddling with his equipment mid-game – was the real deal. At least as real as backup goalies get, anyway. Peter Budaj was traded to the Winnipeg Jets in early October, and Dustin Tokarski would become a full-time NHLer.

Goaltending was the story of the season in Montreal, and Tokarski had absolutely nothing to do with it. While Carey Price started 66 games and went on to win four major NHL awards including the Hart Trophy as League MVP, the goalie affectionately known as "Tic" watched from the end of the bench.

As a result of starting just 17 games in the regular season and none in the Stanley Cup Playoffs, there isn’t a whole lot to talk about when it comes to Tokarski’s first full season in the NHL. What little there is to discuss points towards an overall mediocre season that by all means could have gone a lot better, but by the same token, perhaps not all of the fault lies with Tokarski himself.

*Credit to War-On-Ice.com for statistics.

Taking a look at some of Tokarski’s closest peers in terms of 5-v-5 TOI, we can see that the 24-year-old netminder is frankly pretty average. This doesn’t necessarily mean that he is average by the standards of all NHL back-ups, but compared to those with a similar workload he had a comfortably run-of-the-mill performance. 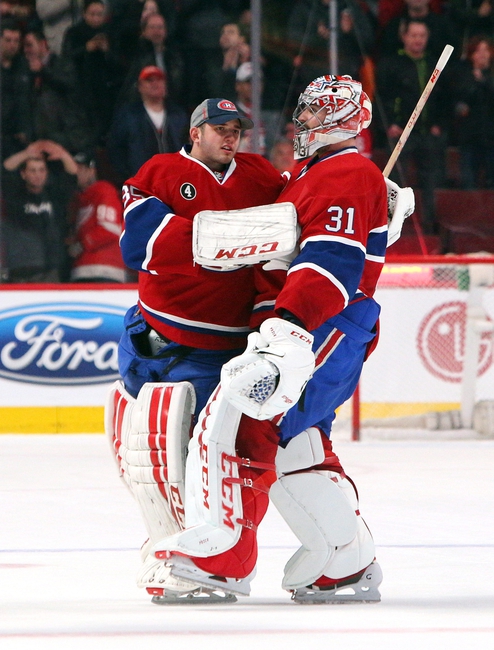 A great way to compare these players is by their Adjusted Sv% (AdSv%), which accounts for the fact that some teams – namely, the Montreal Canadiens – give up a lot of high quality scoring chances, while others give up many low quality ones. By this metric, Tokarski is right in the middle of the pack compared to the eight other goalies listed above, though it should be noted that his .907 at even strength is closer to the bottom than it is to the top. Compared to all primary backups league-wide, Tokarski fares worse, but it seems fairer to look at him in the context of the workload he actually had.

Another statistic we can use to compare the quality of goaltenders – and more specifically, their importance to a team – is Goals Saved Above Average (GSAA). In his season preview of Carey Price, Stephen Demone showed that the league MVP was tops by far in this category.

Tokarski, on the other hand, ranked 71st among all netminders in the NHL. This rankings actually goes up to 44th in the league if you remove goalies who played in fewer than 10 games. Still, Tokarski had a negative effect on the team, with a GSAA of -2.56. This number puts Tokarski behind backups such as Calvin Pickard, Andrei Vasilevskiy, and Reto Berra. By the same token, Tokarski actually comes out looking better than some established NHL starters including Ryan Miller and Jonathan Bernier.

We would be remiss not to take into consideration the external factors that could have had an adverse effect on Tokarski’s overall performance. His individual statistics, as well as his overall record of 6-6-4, were not shining by any means but it’s not as if the Habs made life particularly easy for Tokarski last season. He started the majority of his games (13 out of 17) on the road, meaning opposing teams got to take advantage of last change against Tokarski more often than not.

Additionally the Canadiens, already an infamously low scoring team, scored even less with the rookie between the pipes. The team would score just 1.88 goals per 60 at even strength when Tokarski was playing as compared to their season-long average of 2.21, and that certainly didn’t give him much room for error.

It may also be worth noting that Tokarski was never really given an opportunity to hit his stride, as his starts came few and far between - the most notable example being the full month between starts from November 29th to December 30th.

The coming season shouldn’t differ all that much from the last for Tokarski, as he will expect to start roughly the same number of games. This may also turn out to be his biggest obstacle, but such is life when your counterpart is a Vezina favourite. The one thing on his side heading into the 2015-16 season is more experience as he grows more accustomed to his new role, starting games only when he has to or stepping onto the ice midway through a contest.

Last season Carey Price established himself as one of the NHL's elite goalies. This season we'll get to see if he's also one of the league's elite leaders.

In the end, Tokarski’s performance may rely heavily on how the team in front of him can perform. If the defense continues to allow a large number of high danger scoring chances, you can expect Tokarski to struggle once again. He wasn’t particularly good at stopping such shots in 2014-15, and that is unlikely to change. A tighter defense combined with even moderately more support from the goal scorers could make all the difference in the world for the Habs backup.

When all is said and done, though, the Canadiens world revolves around Carey Price, and rightfully so. If all goes according to plan, Dustin Tokarski shouldn’t start more than 20 games this year and we wouldn’t have it any other way.