An interview with Gabe Polsky, director of Red Army

If you're dissatisfied after watching Red Army, Gabe Polsky's documentary film about Soviet era hockey, he personally guarantees he will give you your money back

Share All sharing options for: An interview with Gabe Polsky, director of Red Army

By now most of the hockey world has heard of Red Army, Gabe Polsky's feature length about Slava Fetisov's life and about the history of Soviet hockey. The film has been shown at film festivals around the world, including Cannes, Telluride, New York, and Toronto. Director Gabe Polsky has very kindly took the time to do an interview with Habs Eyes on the Prize, talking about Soviet Russia, creativity in modern-day hockey, and the time he met Scotty Bowman after a film screening.

So hello - we’ve actually spoken before, in a preview screening in Montreal. There was a Q&A section at the end and I asked a few questions.

Yeah, I would say the key difference between Montreal and the rest of the Canadian hockey teams is that they’ve won the most Cups. They’re known for having style – like the Red Army team. They’re more creative than the other Canadian teams. It’s an interesting thing to think about culturally, how it differs – how the various owners and GMs, how certain teams have their own style and culture. Montreal in the past have more of a flair. They’re more exciting to watch.

That’s interesting, because one of the things I wanted to bring up was a passage from Ken Dryden’s The Game, when he talks about the Soviets.

Of course! I want Ken Dryden to watch this movie! He’s such an interesting guy. He has so much to say about this film, both politically and culturally, from a sports standpoint. You should get him to watch the film.

I’ll try. [laughs] There was a point in his book where he credits the Soviets for sparking the creation of the modern NHL. He talked about how Russians invented the idea of off-season training, playing without the puck, not relying on obstruction, things like that. Do you think that this clean, graceful style would come back in the NHL?

No, I don’t. Not even close. Listen, I’m not a proponent of copying the Soviet style, and doing what they were doing. I think the game has evolved. But I think to this day, if you watch the 1977 Canada Cup, what these guys were doing at the time, it blows NHL hockey away. Like, blows it away. The way these guys were moving the puck, the intelligence on the ice, the movement, the playmaking. You’d think that they would study this thing, and try to make hockey better and more interesting, but I think part of it is cultural. In order to build this chemistry you have to get these guys together and bond, and they have to know each other incredibly well. And because players are always moving around, and culturally, they’re going back to their families and they don’t spend much time together off the ice, so the chemistry isn’t quite there. In order to build a masterpiece, you need to have that chemistry.

But they also paid an incredible price for it.

They did, and you don’t have to go to those extremes. But culturally, the NHL has evolved. If you read the article by Igor Larionov, the coaches don’t take risks. They don’t take this kind of risk. They want to play the same as everybody else, so it’s just this chippy, dump and chase that isn’t very interesting for the audience. And anyone could play this style. It takes creative talent and also a coach with vision and openness. 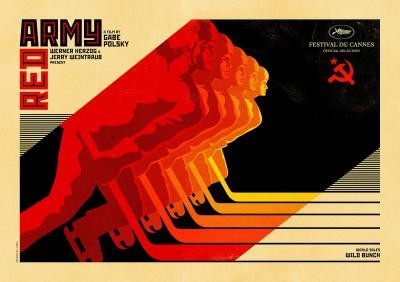 Back to the film – you said in other interviews that you played college hockey and majored in political science. How did you began filmmaking?

I think there’s a clear connection there, because my film is about hockey and politics, and there are a lot of geopolitical themes in there. I think from a hockey standpoint, I’ve always viewed the game as a creative expression. And when that was gone, when my career ended, I needed a place to express that creativity. It wasn’t on the ice anymore – filmmaking was a good way to express that. I was never really able to express that on the ice, and it was a different system of play. I never expected that a) I would be making films or that b) the last thing I wanted to do was to talk about hockey or to play hockey, after I was done with my career. But for some reason, I was led to this idea, and I knew I had something to say about the sport and the culture. And I had so much passion I needed to share with people.

There was a very distinct and creative visual style you had in the film, with the quick gags and the rhythm of the editing. Was that part of your process?

I think when you’re so passionate about something in life, like hockey, and in college I didn’t have anywhere to channel that with my playing. And I had so much unfinished business, so I channeled my ideas and passion from the ice and into the film. 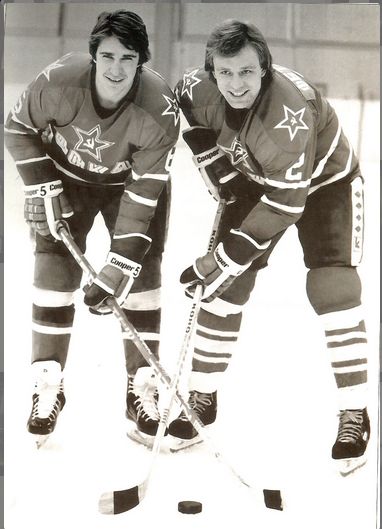 Speaking of ideas, you’ve previously said that you only interviewed Slava Fetisov in the last few days of filming. What other kind of narratives were you considering doing with Red Army before he agreed?

It’s hard to say. I just knew instinctually that I was going to have a lot of depth in the story. That I was going to tell a story about the Soviet Union and the people, but through hockey. I didn’t know how, but that was the key. So you just go out there and you just start interviewing people the best you can, and whatever happens, happens. You do the best with what you got.

But what kind of ideas did you start off with?

I had to collect the footage initially, and slowly, the story started to evolve and focus on Fetisov. Initially there were more talking heads, but I realized I could get more emotion out of it if I focused on one guy. There were so many people involved, but to get people emotionally involved I had to focus on one guy.

And I want this to be a unique film. This isn’t like a television documentary. This is a real film. I want this to compete with the biggest films out there.

At the end of your Q&A, of the screening I went to, you asked if watching this film was better or worse than watching a Habs game. And I thought it was actually better than your average hockey game.

Yeah, I wanted this to be a great experience in sport for anybody. I was hoping that I can tell a story that can rival the best sports films out there. There are a lot of films out there, and to compete with them you have to tell a damn good story.

And I’m the same way when I watch hockey, I want to watch a good play every shift. And that’s the same with filmmaking – every frame, every second has to be interesting. I want hockey to be the same way, but the trouble is that you only see one or two good plays a game in today’s hockey. 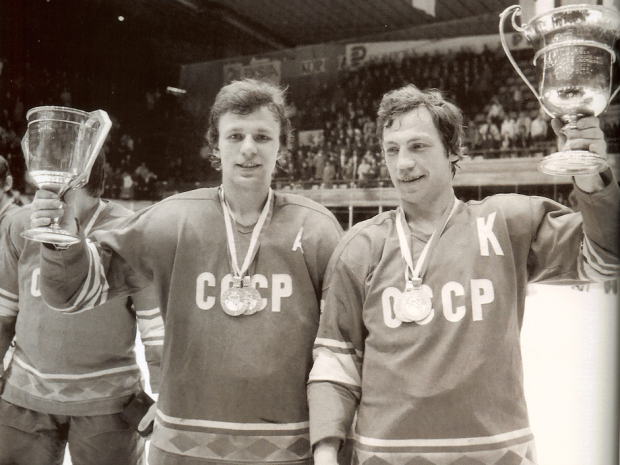 Well, in your film, the editing was very tight, but there were some intriguing human interludes. Like when the ex KGB agent talks to his granddaughter eating ice cream. Or when Fetisov disagrees with the interviewer.

It’s a bit of a paradox that they weren’t all the same, but in certain ways, they were. They were different kinds of players, but emotionally, and culturally, they were the same.

There’s a philosophy, not like North American players, who try to show off and be individuals. It’s totally different, everyone was content with being similar, not sticking out.

So do you think NHL players should stick out less?

No, no, I think there’s a middle ground. You should be free individuals, that’s what being human is – feeling like yourself. But it was a very Russian thing to say: "We are all the same". You have to almost experience it before you understand it. 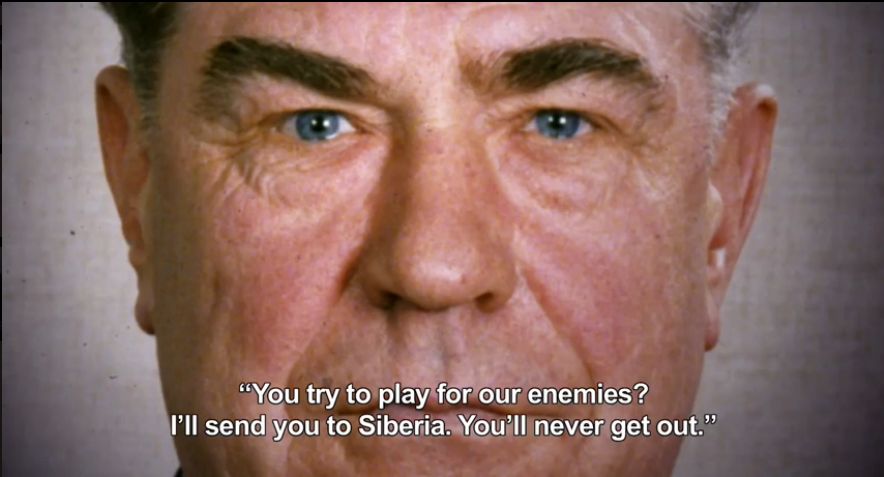 But even as the child of Russian immigrants, were you afraid of slipping into Russian clichés?

No. I’m really sensitive to clichés. If anything even remotely smells like a cliché, I get sick.

I noticed a lot of references to training with ballet and chess. I wonder if it felt a bit cartoony-Russian at times.

Never. Which was why I found some of the film almost too incredible to believe. It was such an abrupt departure from what we normally see in athletes.

Yes! But it’s true! To me it’s incredible no one has ever thought of that before. That’s the essence of sport. To me it seems like common sense, but other people don’t understand. You have to study things and constantly change the way you approach things, or else you live in a very dull, boring world.

I wish I knew.

Because they’re afraid, that’s why.

Tell me about filming this movie. Any good stories?

Okay, Scotty Bowman. Since this is for Montreal, I’ll tell you an original story about Scotty Bowman. So I was reaching out to Scotty Bowman, and Slava Fetisov helped me get his number. And so Scotty was like "yeah, sure, I’ll do the interview." He was a really friendly guy. Talk about a guy without an ego. What’s amazing about guys who’ve succeeded on such a level like Bowman and Gretzky – very supportive, always returning calls. I was no one. He didn’t know me from Joe Blow on the street. And he just called back and was so open. He’s the greatest coach of all time and he was just such a nice guy.

So then when I met up with him he was busy in Chicago, and he had no idea what I was doing, really. He as just like "Oh, okay, I’ll talk about the Russians, but who knows what this kid is doing". So when I was in Toronto for the [TIFF] festival, Scotty Bowman drove up from Buffalo, or somewhere pretty far. He brought a friend, and the greatest moment of my career was after the screening, everyone went behind the stage. Gretzky was there with his family, and Scotty was there. And the look on Scotty’s face: he was so excited about this film, he was calling everyone he knew. I couldn’t even get his attention, he was so excited. He was talking into his phone like "You gotta see this film, it’s incredible." It was the greatest moment of my life.

It’s just funny that the guy [Bowman] who was constantly checking his watch when I was interviewing him in Chicago, asking why did this guy want so much time, it’s just funny that the film reached this high level, that the people I interviewed, even the Russians, were just blown away. The biggest surprises are from what you never expect.

I bet when Scotty came in, he had no idea. Neither did anyone from the NHL. The film’s just been all over the world, and it was the biggest doc of the year at one of them [the festivals].

That’s amazing.  Before you go, any last words?

I personally promise, that I will give people their money back if they’re not satisfied by this film. I guarantee it.

All right - I have this on record, by the way.

You can give my email out, if anyone’s dissatisfied with this film, they can send me an email and I’ll reimburse them. But it’ll be bad karma if they’re just jokers doing it for the money. Tell them my guys will punish them.