The Montreal Canadiens had the chance to even up the season series, but were overwhelmed by a hungry Ottawa team in the middle of a playoff race. 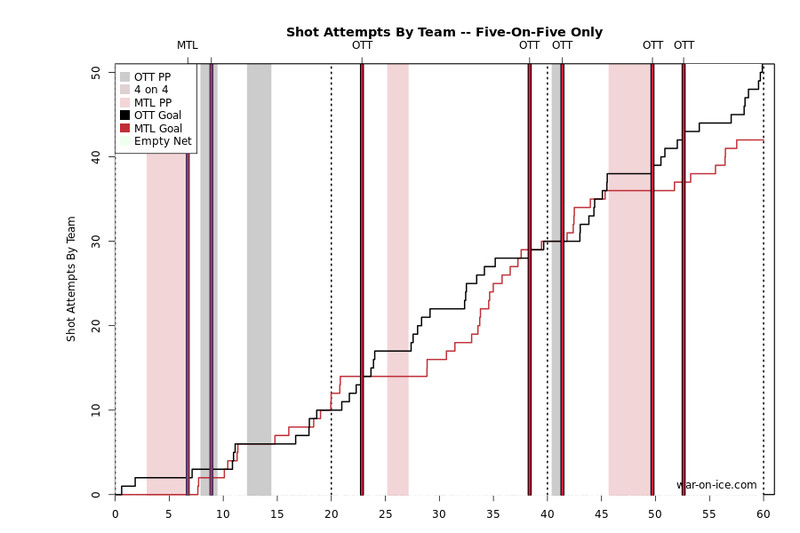 The Senators' defeat of the Habs earned them the outright 3-1 victory in the season series, outscoring their opponent 14 to nine. The Senators needed these two points in the worst way to keep pace with the Bruins, who beat Tampa Bay earlier in the evening.

The Habs capitalized off an early four-minute man-advantage as the legendary PK Subban channeled the forces of nature and unleashed them on the puck, which then broke the fabric of space and time on its way to Max Pacioretty's shin which diverted it to the back of the net. It was Pacioretty's thirty-second of the season.

The Tricolore (that's the French slang for Habs, I can only refer to them in so many ways) would extend their lead after Pacioretty took advantage of a bounce off Bobby Ryan and a smooth play by Lars Eller and roofed his thirty-third past a victimized Andrew Hammond.

Fun fact: It was two nothing Montreal before Ottawa had a shot on goal.

As the first period concluded the Canadiens limited the Senators to two even-strength shots on net and the Habs were in pretty good shape as indicated in the chart below.

That chart would take a bit of a dip as rover Erik Karlsson would wire a shot past Carey Price for his sixteenth of the season.

Alright, I have to post the chart again, I guess. Jean-Gabriel Pageau's birthright would not be denied as he scored his fourth of the season, his third against Montreal.

The second would end with the 417 rivals tied at two, which primed to the make the third period a bonafied barnburner!

Oh, and here's the chart.

The third period would see Montreal's chances at victory slip further from their grasp, as Mark Stone would tip his seventeenth of the year past Price on the powerplay.

You could see this coming a mile away as the Senators had been running roughshod over the Habs since they beat Price for the first time.

The Sens would continue to plague the Habs as Kalrsson notched his second of the game and his seventeenth of the year to give his team a two goal lead midway through the final frame.

Ottawa would score their fifth straight goal as Marc Methot would bank his first goal of the season.

The score aside, Habs now have to deal with an apparent Pacioretty injury. The Habs' best player not named Carey Price hobbled to the locker room after being struck by a shot late in the game.

Not much to say that hasn't been said in previous game recaps. The Habs played Michel Therrien's system perfectly. They chipped and chased their way through the game, they were overwhelmed in the shot attempt department and it was reflected on the scoreboard. The only difference here is that the Habs were up by two early on, thanks to some strong special teams play.

As the second period commenced it was painfully obvious that the Habs were told to protect the lead and grind their way to the final horn. The Senators came out flying and presented the Habs with odd-man rush and after odd-man rush led by Karlsson who was stellar in this comeback win.

We've seen this movie before; we keep showing up despite the director's incompetence but the cast is great and it kills at the box office.

I think that despite the coaching flaws the Habs are regressing and will bounce back to life come playoff time. Playoffs are an inevitability right now and at the risk of sounding like a hopeless optimist in the face of cold hard facts, I will cling to the "anything can happen in the playoffs" fable for dear life.They do have the best goalie in hockey.

The Habs suit up on Saturday night as they travel to Long Island to take on the Islanders.