One month after letting go of a probable win over the Senators, have the Habs learned their lesson in time for a win tonight?

Share All sharing options for: Canadiens vs Senators game preview

Playing one of the better team's in the league, and certainly the conference, the Montreal Canadiens were stifled. The Detroit Red Wings played their typical style, jamming up the neutral zone and keeping decent attempts on Jimmy Howard to a minimum.

It was not until the final minute that an opportunity presented itself, as Tomas Plekanec was the beneficiary of a Pavel Datsyuk slip-up, giving him the time and space to rip a goal against the grain and past Howard.

Of course, none of that would have been possible if not for another excellent night for Carey Price, who earned his fifth shutout of the season. Price is tightening his grip on the Vezina Trophy with every game, and with a closer look at his best competition, it's clear that the race isn't all that close. 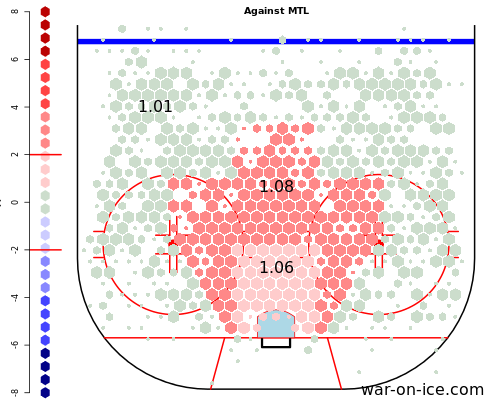 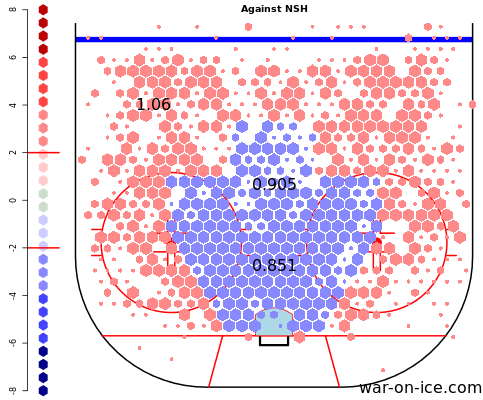 Price is facing four more shot attempts per game than Nashville goaltender Pekka Rinne. The greater disparity lies in the difficulty of their workload, however.

As the bottom chart illustrates, Nashville is doing a superb job of keeping their crease clean, keeping shots to the outside in the type of expert fashion that perhaps only the Toronto media could describe. Montreal's best numbers, meanwhile, lie near the blue line, and their success with those longer distance shots is likely most attributable to the fact that their opponent is busy shooting from a better position. Blue may be better when it comes to these numbers, but in 2014-15, Carey Price is the equalizer.

So, with their superstar goalie in tow, the Habs press on to Ottawa, looking to gain the upper hand in the season series with their closest geographic rivals. The Canadiens most recent accomplishment was to deal only the fifth home loss of the year to Detroit, and in doing so, they pushed their record in two goal games to 10-1.

The Ottawa Senators are a slumping squad.

They got off to an atrocious start, and ultimately, that stumble cost Paul Maclean his job.  When the Habs and Senators last met, the Sens were on a huge possession upswing. This time, their ten game rolling average looks more like David Legwand taking a stick check.

Looking to the future, the team just extended 29-year-old Marc Methot, who provides a steady presence in Ottawa's back-end. The rearguard's season has been cut short by injury, but when he has played, he's been very effective. Methot allows fewer shot attempts to reach his goaltender than any Sens defenceman not named Patrick Wiercioch, and Methot has done that with a deployment slanted toward the defensive zone. Due to some extenuating circumstances, that kind of shot-suppressing talent is exactly what the Senators will need tonight.

In the type of accident that can only happen to a downtrodden team, the Senators lost Robin Lehner to an injury when he was run into by his own player against the Hurricanes on Monday. Lehner, in net only because Craig Anderson was already on the IR, left the game and will not play this evening. Compounding their injury woes, Ottawa also lost one of their most effective forwards on the play, as Clarke Macarthur hurt himself sliding into Lehner as he tried to break-up the odd man rush. Then, in the most fitting conclusion to a disastrous play, Jay McClement scored anyway.

No Anderson and no Lehner means that Ottawa moves on to the next man up, Andrew Hammond. Hammond is perhaps most famous for being pulled 36 seconds into an AHL contest earlier this year, after giving up three goals to the Lehigh Valley Phantoms before the game was a minute old. The incident is par for the course for Hammond's campaign, as the 26-year-old keeper is second-to-last in save percentage among AHL goalies.

The Canadiens and Senators have traded 4-1 victories so far this year, with their most recent clash marking Ottawa's turn to take home the two points.

Jean-Gabriel Pageau earned the game-winner late in the first period, cementing his #pesky irritating reputation in Montreal hockey circles. That game winner was fired past Dustin Tokarski, who will get a chance to exorcise those demons tonight.

The Habs went into their last game against Ottawa looking at a probable win, but in retrospect, a match against a team trending upward on possession while playing in front of Craig Anderson's solid goaltending should have been regarded as a trap.

Tonight, the Habs again appear poised for a win over Ottawa. One month after failing to meet those expectations, let's see if the Canadiens have learned their lesson.