Can the Habs clinch their season series with a division rival, or will they find that their weak schedule has weakened them?

The Montreal Canadiens relatively easy recent schedule has forced them into something of a test: avoid the temptation to play down to the weaker teams around the league.

Their results have been mixed, and Saturday night's win over the Maple Leafs is a perfect example. The Habs probably shouldn't let Toronto come within a barely misplaced Nazem Kadri OT wrist shot of ruining their night, yet the Habs nearly squandered a highly winnable game in the extra frame for the second straight time. Fortunately Carey Price, Alex Galchenyuk and David Desharnais saved the day during the shootout.

Tonight, the Habs get a night off from that particular challenge, as they'll face just the second strong team they've seen since the month began. To make things even more interesting, they'll have to find a way to win while missing a top-four defenceman.

Crunched into the boards in his own zone on Saturday, Sergei Gonchar has not travelled to the Motor City. Even with the call up to Greg Pateryn, it's likely that Mike Weaver will stay in the lineup and Gonchar's roster spot will be occupied by Tom Gilbert.

As the defenceman who has played least of the six most likely to suit-up tonight, it is Mike Weaver that Michel Therrien will need to figure out how to integrate into his pairings. Weaver is a capable enough defenceman, but plays a much different game than Gonchar does.

Gonchar is an asset on the powerplay, and can pick up points at even strength, too. He's effective at getting his team shot attempts when he's on the ice, but simultaneously struggles to put keep attempts away from his goaltender.

Weaver is the opposite, leveraging a defence-oriented game to keep shot attempts away from his keeper at the expense of putting any shots toward the other team's net.

This creates a burden, and that burden is likely to end up where it always seems to: on the Habs' top players. In this case, Subban and Markov will be depended on more than ever to create for their teammates.

The Detroit Red Wings are making the most of their talent, and their excellent defensive record is proof of that. No team allows fewer shot attempts than the Red Wings, as Detroit is four shots per sixty minutes ahead of their closest competitor. Mike Babcock's crew is also doing an excellent job of limiting high-quality shots, as the Wings find themselves at the top of the league when it comes to scoring chances, too. Their nearly guaranteed playoff spot is the product of this good work, but they've had to overcome a major flaw, too. When it comes to producing even strength offence, the team is toothless.

Detroit is 5th from the bottom of the league when it comes to even strength goals for, and in the bottom seven when it comes to shot attempts. Six of the top sevens scorers in tonight's game will be wearing the Sainte Flanelle, and the fact that Dale Weise has more even strength points than both Henrik Zetterberg and Pavel Datsyuk is a dramatic illustration of Detroit's struggle to score at 5v5 this year.

The Habs will have to stay disciplined, though, as Detroit makes up for their even strength shortcomings by making teams pay on the powerplay. The Red Wings are scoring on roughly every sixth powerplay, giving them 1.66 goals with the man advantage every time Montreal scores one. This production makes up almost a third of Detroit's total output for the year, and if the Habs want to win, it will be crucial that they keep the league's best powerplay unit off the ice.

Last time out, the Habs played the type of strong game they'll hope to play tonight. They owned the first two periods of the game, and after a scoreless first, put two goals past Jimmy Howard in the second period. 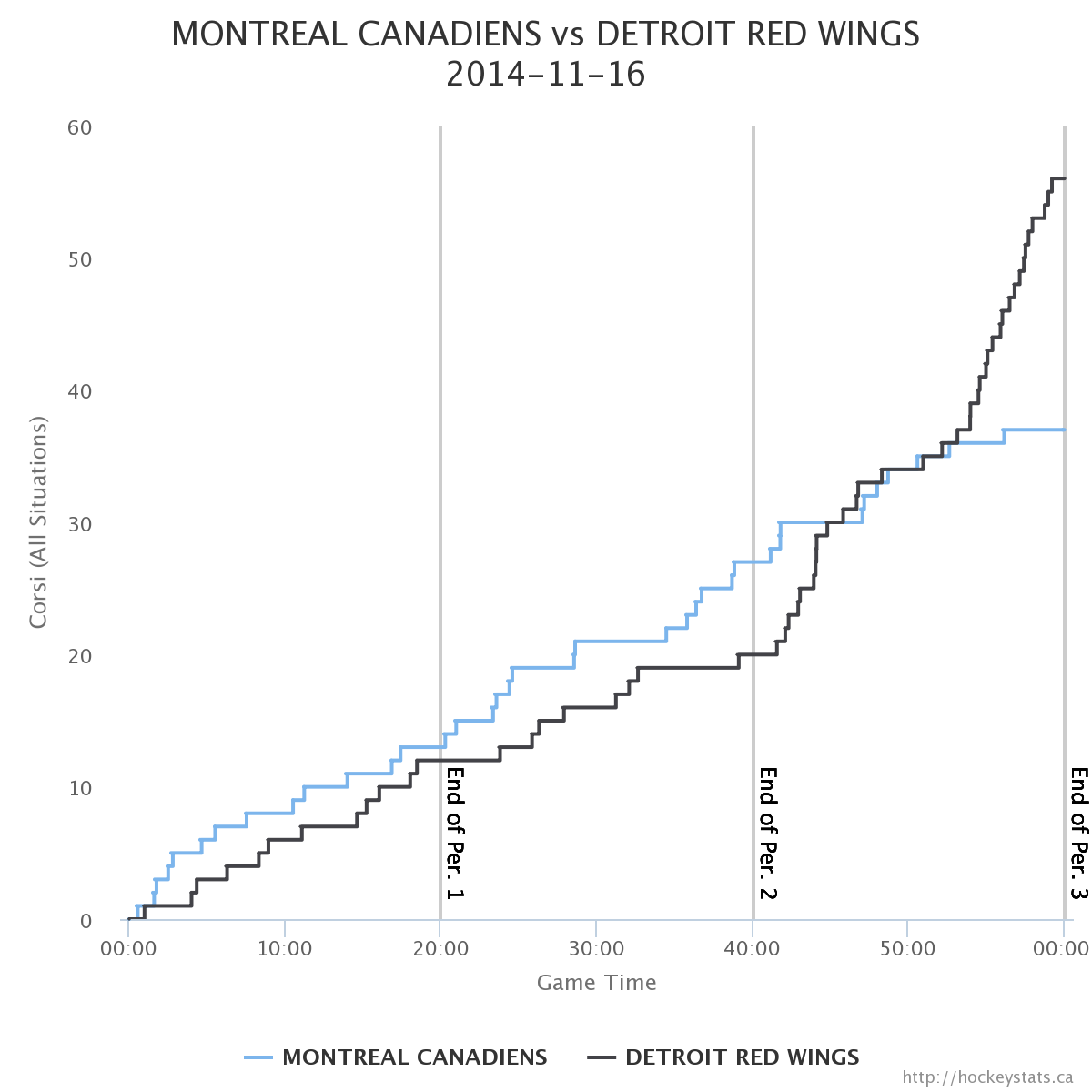 Detroit pushed frantically in the third period, but it was the Habs earning another two goals, and coming away with the 4-1 victory. The win marked Montreal's second of the year over Detroit, after a much closer affair the first time out. A Canadiens triumph this evening would clinch the season series with the Red Wings, and give the Habs a nice six point cushion over a division rival that has one game in hand on them.

For two games so far this year, the Habs have held down the Red Wings by limiting their opponent's chances, and controlling the game at even strength. Down a relied-on, veteran defenceman, Montreal will look for the same result tonight.