The Canadiens were really good against the Capitals. Braden Holtby was better.

The Montreal Canadiens played a near perfect game, but much like they have done to other teams the past few seasons, great goaltending won the day as Braden Holtby won the game for the Washington Capitals.

The Canadiens led in every category - shots, scoring chances, shot attempts - but on the scoreboard where it matters most, they fell just short. 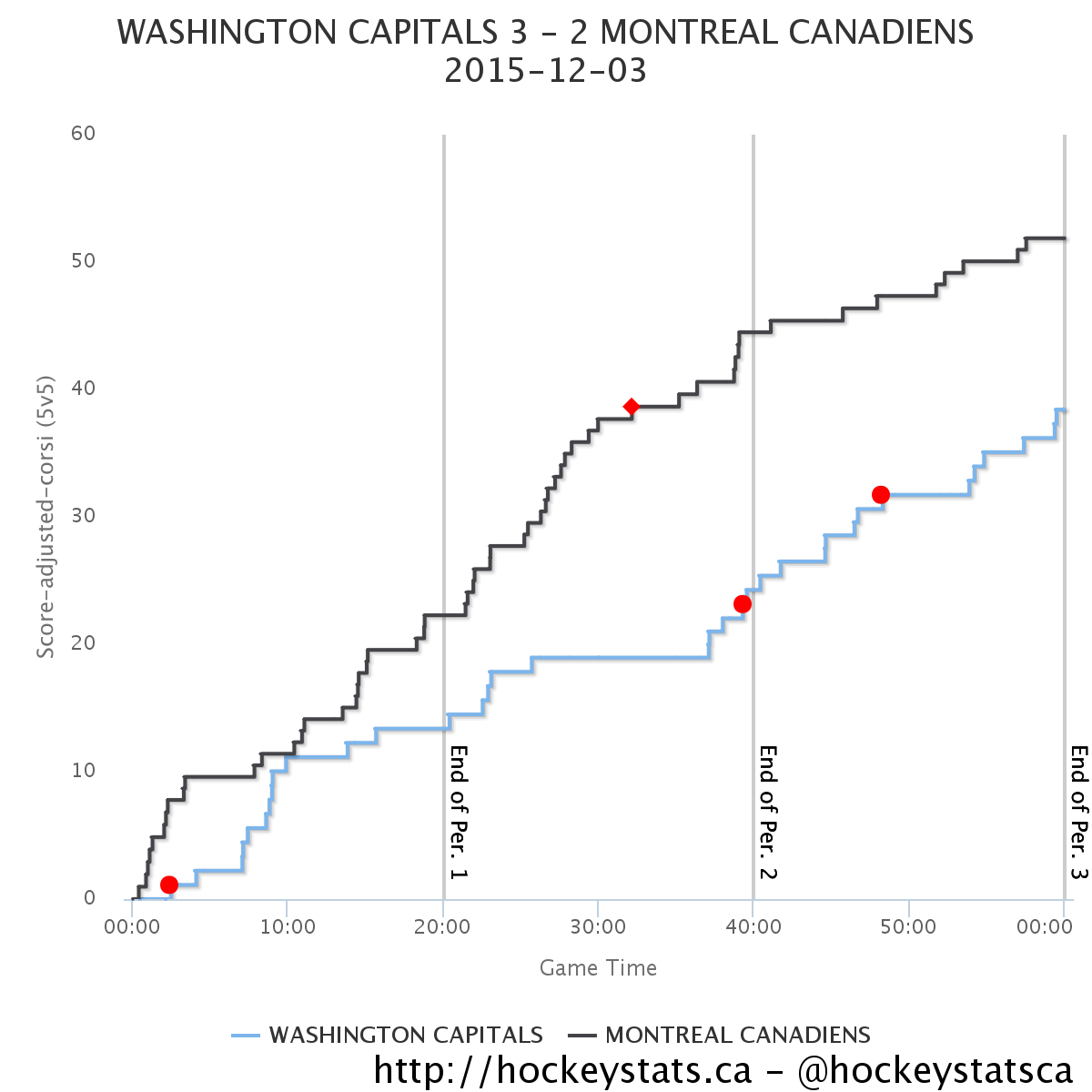 Mike Condon didn't even play badly. Two of the goals scored on him were just bounces that went the wrong way. If the second goal bounced on the front of his shoulder instead of the back, it doesn't go in the net. If the great deflection by T.J. Oshie on the winning goal goes a bit differently, it doesn't go in.

Sometimes those are the breaks, and the hockey Gods are merciless.

It wasn't a great start for the Montreal Canadiens on the scoreboard but was a dominant first period in almost any other category. Tom Wilson scored the period's only goal after a turnover in the Canadiens zone.

The line of Max Pacioretty, Dale Weise and David Desharnais was actually getting scoring chances and just couldn't beat Holtby. And that continued for the rest of the game. Say what you want about whether they should be together, but they weren't the reason the Canadiens lost.

The first three minutes of the second period had four scoring chances. Lars Eller skated around, winning the puck off the boards and was dominant most of the night. The fourth line even got into it as a shot from Devante Smith-Pelly tested Holtby. Then, a deflected shot by Andrei Markov completely fooled Holtby but rang harmlessly off post. Shortly after, Pacioretty had a partial break beautiful lead pass from Paul Byron.

All stopped by Holtby.

Later in the period Alex Galchenyuk and Sven Andrighetto had a two-on-one that was once again stopped by the glove of Holtby.

Montreal finally got on the board as Eller scored on the power play, a spot he earned by playing well all night. It is nice to see Therrien allowing him to get some time on the second unit and that should continue with his success there.

Before the end of the period, the Capitals re-took the lead as Oshie's shot bounced straight up in the air off of Condon, fell back down off of his shoulder and into the net. It was reviewed for a high stick but no Capital touched it.

The third period started off with a Canadiens penalty but after Paul Byron just missed a shorthanded chance, he set up Brian Flynn on a break who beat Holtby with a great move to tie the game at 2.

The Capitals took the lead with just under 12 minutes left in the third period and despite many chances for Montreal to tie it, they fell short and a bad penalty by Dale Weise sealed the game as the Canadiens could not get anything going shorthanded or with Condon pulled.

Michel Therrien had a glare for Weise that is normally reserved for his dog house residents. I wonder if that will have any implications on future lineups, but that line, and all the lines except for the fourth line, played very well and it's hard to clamour for changes after a game like that despite the loss.

With the fourth line struggling, mainly Smith-Pelly, I wonder if Daniel Carr will break into the lineup for his NHL debut.

Nathan Beaulieu and Jeff Petry continued their strong tear, playing at near 70-percent Corsi at 5 on 5. The line of Tomas Fleischmann, Tomas Plekanec and Paul Byron was also surprisingly effective.

Games like these happen, but if the Canadiens played like they did tonight, they will win much more than lose. After all, making major changes after losing a few games where you overwhelmingly outplayed the opponent would be ill-advised.