Canadiens vs Lightning Recap: This far and no further

It was a rollercoaster kind of rush, but the Habs pulled through to win in the shootout, halting the skid at six.

Share All sharing options for: Canadiens vs Lightning Recap: This far and no further

Rejoice Habs nation, two losing streaks are over. With this victory, the losses stop at six, and the Habs have their first regular season win against Tampa since 2013-14. 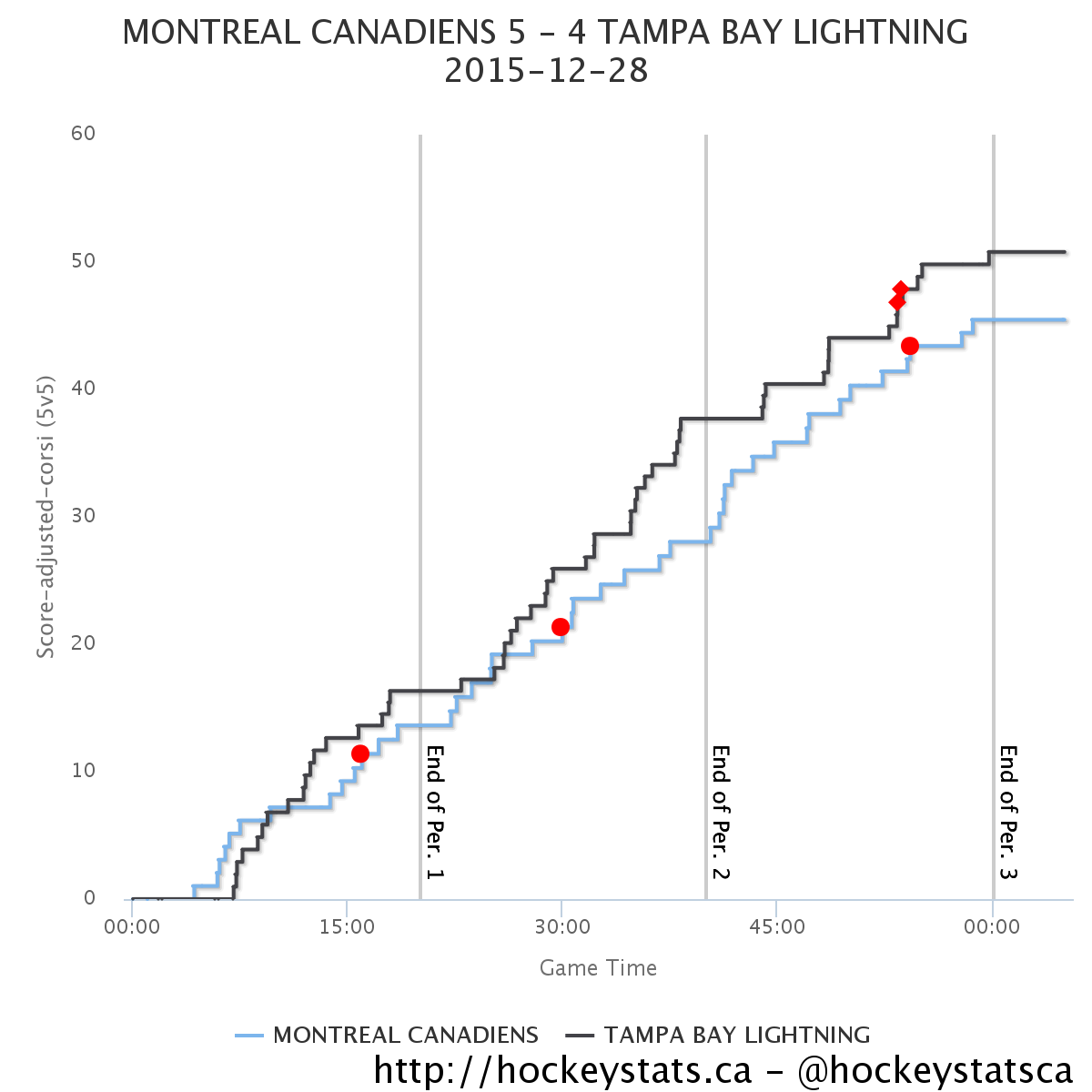 The first period started off incredibly strong for the Habs. Two minutes in, Paul Byron drew a hooking call, Sven Andrighetto was busy making things happen. Therrien opted to play Daniel Carr and Andrighetto on the first wave, following up with Pacioretty-Galchenyuk-Eller, and though nothing happened, the powerplay actually looked dangerous. By the six minute mark, shots were 8-0 for the Habs. Mark Barberio nearly had his first as a Hab against his former team, but was unable to elevate the puck over Ben Bishop.

Tampa would not get their first shot till the seven minute mark, but after that, they woke up with a vengeance. The Habs spent the next stretch absolutely hemmed into their own end. Lars Eller and Greg Pateryn decided they didn't much like J.T. Brown and laid a pair of big hits on the Tampa forward, but other than that, Tampa more or less ran the show.

A little over 15 minutes in, P.K. Subban made a beautiful little play to catch Tomas Plekanec driving to the net. Plekanec put the puck away, and gave the Habs their first opening goal in six games. It was Plekanec's first goal in twenty one games, and his first even strength goal since October 17th. It was also scored against the flow of play, and it looked like perhaps the hockey gods were slowly coming around in their favour.

Condon continued to make big saves as the Tampa pressure continued, making a huge save on Brian Boyle as the Canadiens ran into each other around him.

The Habs would finish the period with the lead, but Plekanec tipped the puck out of play seconds before the period ended.

Between Condon and some aggressive penalty killing, the Habs escaped the period opening penalty kill unscathed, and it continued to look like goaltending and luck had indeed returned to the Habs. Flynn and Eller both had strong chances, but Bishop made both saves, before Cedric Paquette got past Andrei Markov forcing the later to take a penalty, and Condon to make a huge save.

Because it's the Habs, and Lady Luck hasn't liked them much, a play that began with all Lightning players covered, and Condon seeing the puck, ended with a Tampa goal as Condon put the puck through his own five hole. Kucherov was credited with the goal. Four minutes later, Alex Galchenyuk decided enough was enough already, and kicked a heady series of passes that ended with the puck back on his stick and in the back of the net. 2-1 Habs.

After that, it was more or less the Mike Condon show as he made massive stops on Stamkos and Namestnikov, and Barberio nearly sprang Byron on the breakaway. As the period ended, it looked like the old Habs might be back. My notes, unfortunately, read: "the old Habs appear to have returned. Condon is on FIRE tonight. It’s a good combination. On the other hand, can’t help thinking the Habs are bound to get burned."

The third period started and ended strong for the Habs. What happened in the middle was disastrous.

To start the period, the Galchenyuk line and the Barberio-Pateryn pairing had some really solid plays, and P.K. Subban's patented razzle dazzle in the offensive zone came out to play with a vengeance. Eight minutes in Galchenyuk's line had some excellent pressure. Shortly thereafter, Plekanec had a breakaway that was stopped by Bishop, immediately followed by a Max Pacioretty breakaway that met the same fate.

Then disaster struck. Jason Garrison scored on a wrap-around that Condon saw coming, but slipped under his pad before he could get it down. Forty seconds later, Callahan scored. It looked like history would repeat itself, but instead the goal sparked a remarkable series of events. Therrien challenged the goal, arguing that Condon had been pushed on the play. The goal was not overturned, and the Habs went to work with a vengeance. Pacioretty and Weise stormed the Lightning net, and after a mad scramble, Weise demanded the refs review the play. Review showed that Weise had, in fact, scored, which prompted Cooper then to use his coach's challenge. Again, the goal stood. Three goals, two forfeited timeouts, one minute of play. Hockey.

Scarcely over a minute later, Torrey Mitchell took a hooking penalty, Plekanec almost had his second goal on a breakaway, Plekanec and Kucherov got into a scuffle, and Brian Flynn charged up the ice to end the period. As Bob Cole would say, everything was happening.

Overtime solved nothing, although Condon made some huge stops, Jeff Petry stuck to Stamkos like a limpet, Eller almost set up a Pacioretty game-winner, and Galchenyuk had himself another monster shift.

Then it was on to the shoot-out.

Condon stoned Marchessault, Bishop outwaited Galchenyuk. Valtteri Filppula scored, and then Therrien sent out Brian Flynn. It must be confessed that I was sure it was a colossal mistake, right up till the moment when Flynn wired the puck through Bishop's fivehole before anyone, least of all Bishop, even knew what had happened. Condon stopped Kucherov, and then Therrien sent out the Captain, with the game on his stick.

The shooter deked, and the Habs won.