Canadiens vs Capitals recap: Make it six as the Habs fall once again, extend losing streak

The Canadiens were hoping a short break over the holidays would help put their losing skid behind them - the NHL's hottest team had other plans.

Share All sharing options for: Canadiens vs Capitals recap: Make it six as the Habs fall once again, extend losing streak

Saturday night's game between the Montreal Canadiens and the Washington Capitals was a tale of two teams moving in completely opposite directions, and their meeting at the Verizon Center was not enough to alter that narrative. 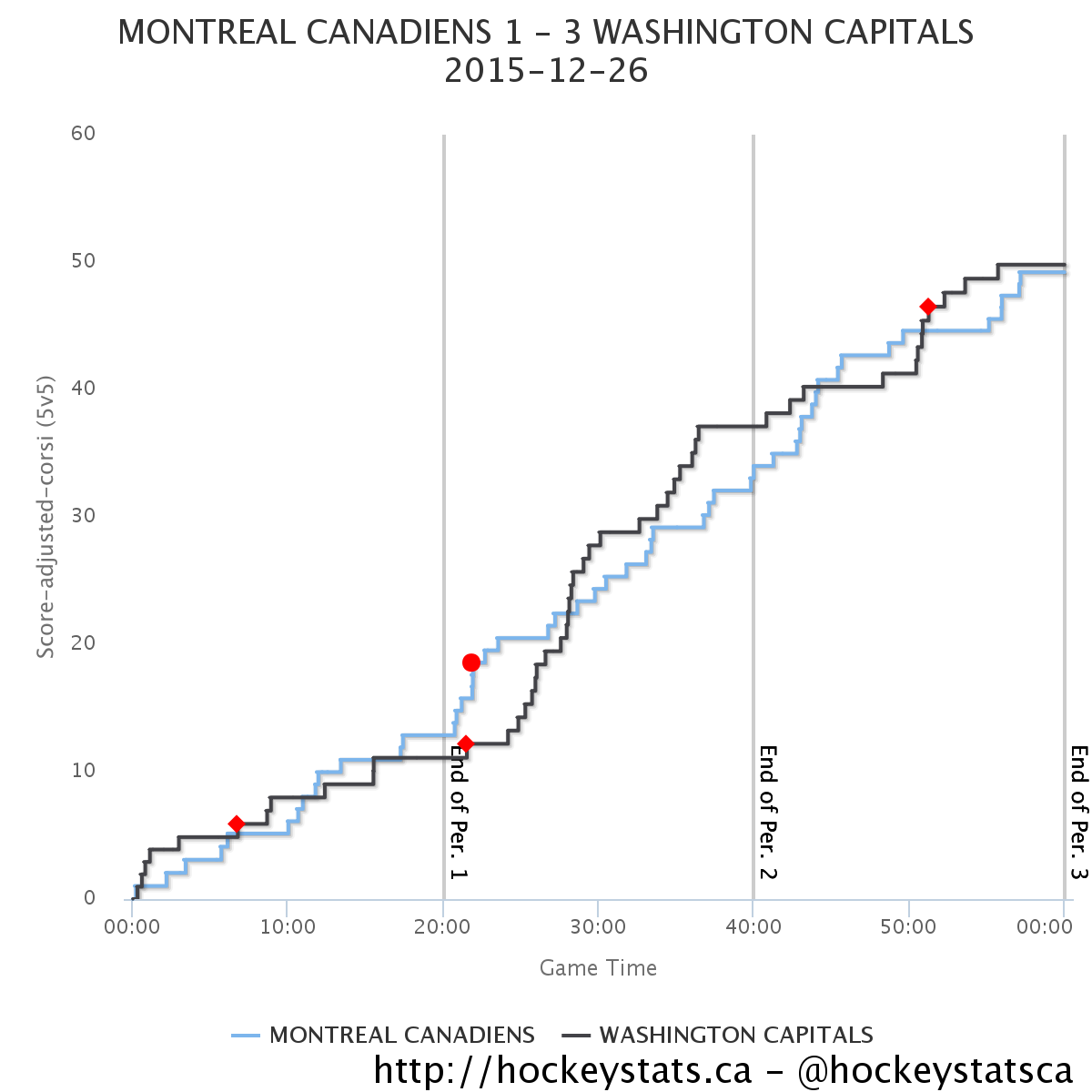 In a game that was pretty evenly played, the same problems plagued the Canadiens that they had hoped they left behind after a three-day Christmas break. An inability to capitalize on scoring chances factored in to yet another loss, extending the losing skid to six straight games.

The Washington Capitals, meanwhile, continued to fire on all cylinders, winning their seventh game in a row on the strength of their depth players. Frustratingly, that is a sentence we might have written about the Habs a month or two ago.

The Habs had a rough go of things in the opening frame, though things might have gone better if not for a few ill-timed penalties. Both were killed by the Canadiens' PK unit, but ultimately sucked some life out of the team and led to them being out-shot 10-5.

Evgeny Kuznetsov opened the scoring in the first period, tipping the puck past Mike Condon after a slapshot from the point by defenseman Nate Schmidt. Kuznetsov's goal would be his 11th of the season and his 31st point as the young Russian forward looks to be having a breakout season.

Frustrations came to a head later in the period as Jarred Tinordi opted to drop the gloves with Tom Wilson - about as fair a fight as Tinordi could hope to find in the league. Obviously hoping to create some energy and momentum for his team, Tinordi's fight didn't seem to spark much, and the Habs would head to the dressing room down by one.

The hole would get deeper early in the second period with Jay Beagle wiring one that Condon might like to have back into the top shelf, extending the Capitals' lead to two.The Habs would answer quickly, however, as Daniel Carr scored his fourth goal of the season just 24 seconds later after driving the net, cutting the lead back to one.

The Canadiens looked like a team that might turn things around early on in the third period, but that would quickly change as veteran Jason Chimera busted down the wing past Alexei Emelin and potted his 10th goal of the year, making it 3-1 in favour of Washington.

While the Habs out-shot the Capitals in the third period (and, for what it's worth, out-attempted them throughout the game), they once again failed to convert and 3-1 is how the score would stay.

P.K. Subban was a target of criticism from hockey media in this game as a result of his failure to score more than one goal this season. Invariably the criticism ignores the positive aspects he brings to the team despite a poor shooting percentage that will almost certainly find its way back to normal as the season goes on. Once again finishing the game as a positive contributor possession-wise, and doing so playing hard minutes against a lethal offensive team, such criticism of Subban's play is frankly difficult to listen to.

On the bright side, Condon responded very well to Michel Therrien's criticism of his team's goaltending performances, coming up with a number of impressive stops to keep the game competitive. A .906 SV% on the night is not jaw-dropping by any means, but Condon looked much better in this game than either he or Dustin Tokarski have in a while, and that bodes well for the Canadiens as they try to turn things around going forward.

Something else we can take away from this game is an adjustment in player usage. Therrien has been under fire for his usage, or lack thereof, of Alex Galchenyuk this season but the 21-year-old played over 17 minutes Saturday night, only Max Pacioretty and Tomas Fleischmann playing more.

There will doubtlessly be even more talk about whether or not the Habs should fire Therrien after this string of losses, which has them falling down the Eastern Conference standings. Whether or not he should or should not be sacked this season, Therrien's team played a competitive game of hockey against the league's hottest team.They did it with much more sensible player deployment, which has been a primary critique of the coach thus far.

Still, the Habs failed to get it done for the sixth night in a row, and it's leaving everybody feeling a little helpless, and very frustrated.

The next few days will certainly be interesting, as losing streaks like this lend themselves to rumours of change. Trade speculation, as well as that talk surrounding the much-maligned Therrien, will heat up. We can also expect more news on the recovery of Brendan Gallagher, whose re-insertion into the lineup may be the difference maker the Habs are looking for.

In any event, the Canadiens will take to the ice once again on Monday night as they take on the Tampa Bay Lightning in the first game of a back-to-back set in the state of Florida. With any luck, the streak will end at six.