The Bruins stole two points, as Tuukka Rask earned a rare win versus the Canadiens.

The Boston Bruins only needed 46 seconds in the third period to beat the snake bitten Habs 3-1, on Wednesday night at the Bell Centre. 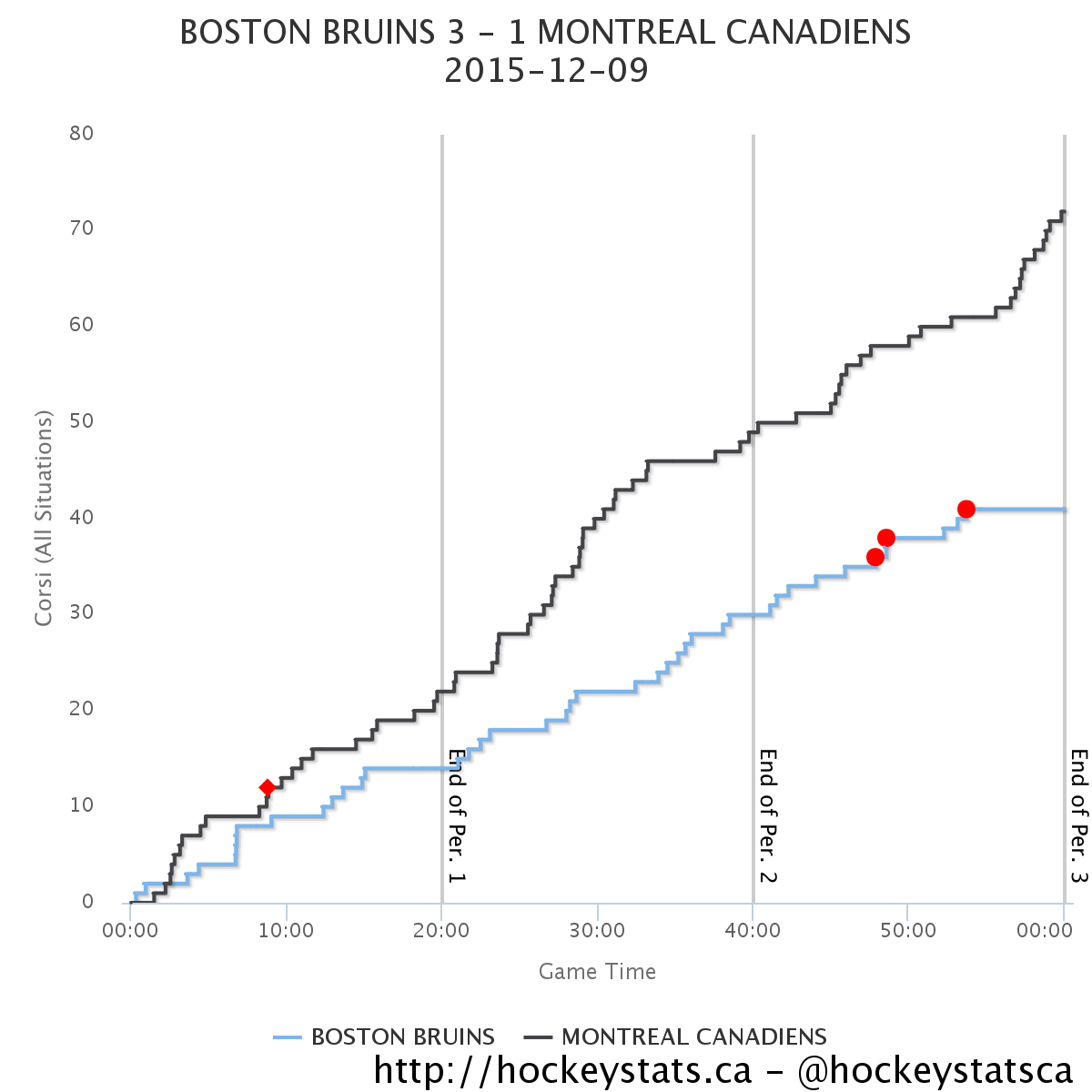 The Canadiens probably deserved a better fate as they played well, but not good enough to beat Tukka Rask, who suddenly found his game.

The game began with the promise of exciting new lines in hopes of sparking a struggling offence. Michel Therrien reassembled the Fleischmann, Desharnais and Weise line, which has seen a lot of success thus far this season. He also placed Galchenyuk with Pacioretty and Andrighetto.

However, it was Paul Byron that struck first, as he centered the puck off a controlled entry into the Bruins zone, which deflected in front of the net and past Tuukka Rask to put Montreal up a goal. The goal was reviewed and initially credited to Plekanec, but it was eventually judged to have deflected off of Zach Trotman, giving Paul Byron his fourth goal of the season.

There was a lack of flow in the first period of the game, as 31 whistles dragged out the period to over 45 minutes. The period ended with P.K. Subban and Brad Marchand getting reacquainted, with coinciding penalties for slashing. The Habs held a 14-7 shot advantage.

Mike Condon made his presence felt, completely robbing Brett Connolly with a flying kick save, which ended up being his best of the game.

The second period continued the theme of lacking flow, as offsides and icing kept breaking up any momentum. Montreal's best chance came off of a big backhand cross-ice pass by Sven Andrighetto to Max Pacioretty, but Rask made a big lateral save. Montreal continued to build momentum after that, as Paul Byron drew a penalty to put the Habs on the power play, but they failed to take advantage.

After Subban and Andrei Markov consecutively fumbled the puck, the Bruins had their best chance of the period. Brad Marchand had a clear shot on Condon off of a 2-on-0 break for the Bruins, but Condon shut the door.

Christian Thomas took an undisciplined penalty with five minutes left in the second for retaliation, which completely impacted all the momentum that the Habs had built in that period. The frame ended with the shots 12-7 in favour of the Habs.

The third period continued the back and forth action, with the Desharnais line showing some flashes of their previous brilliance, controlling the puck on zone entries, and always moving while cycling the puck. Opposing teams have trouble contain this line and their speed.

Montreal's lack of scoring came back to haunt them when Zdeno Chara batted a Jeff Petry pass from the blueline out of mid-air, to mark the exact turning point where the game swung in the Bruins favour. His successful swing skillfully put the puck right on the stick of Loui Eriksson, who streaked on a shorthanded breakaway, beating Condon through a gaping five-hole.

The disastrous minute continued for Montreal, as a rather harmless looking passing play by the Bruins suddenly became a second goal, when Landon Ferraro whipped a shot in front of a screened Condon, who barely flinched on the play.

The Bruins maintained their momentum, as Condon was forced to flash some leather minutes later to rob Bergeron with a big glove save, giving the Habs some hope. Boston's top line was too strong in the end, and Bergeron finally managed to beat Condon on a broken play, when Galchenyuk failed to keep up with Marchand behind the net. The super pest pass the puck to a wide open Bergeron, putting the Bruins up 3-1.

The Galchenyuk line struggled, and Galchenyuk himself had a difficult game, as he was being matched against arguably the best two-way forward in the league.

The  Canadiens have now failed to score more than two goals in the last five games, while giving up three or more in those same five games.

The Canadiens will get a chance to right the ship tonight, as they face the Detroit Red Wings.